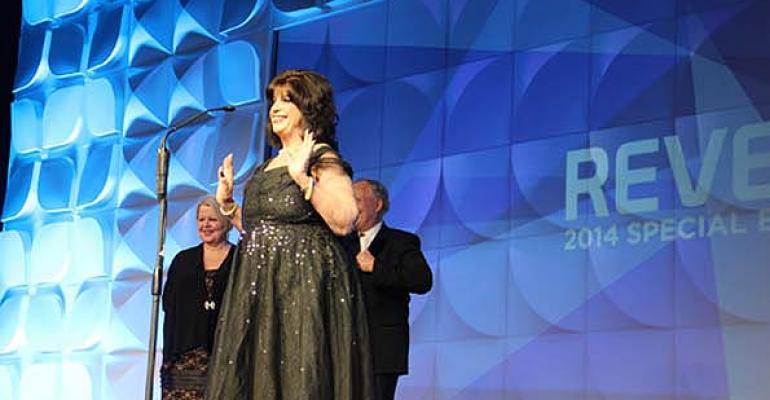 Special Events magazine honored the best work in special events last night by naming the winners of its annual Gala Awards competition. The event was the grand finale of The Special Event 2014, which ran Jan. 7-10 in Nashville, Tenn.

Veteran event producer Cheryl Fish won the Gala Award for Lifetime Achievement in recognition of her outstanding event work for more than 30 years.

Andrea Michaels was given a special Gala Award for her contributions to professionalism in the industry.

See all the Gala Nominees here.

One of Canada's largest multicultural celebrations, the two-day Surrey Fusion Festival featured more than 75 recording artists and performers from all over the world on four stages, along with 38 cultural pavilions enjoyed by more than 100,000 visitors. Following the parade of flags ceremony, attendees enjoyed an interactive farm area, a straw maze and a "learn to dance" stage.

To honor a girl in love with fashion, the event team created the bat mitzvah invitation "Total Fashion": a full-color glossy magazine of more than 160 pages featuring the honoree on the cover. Throughout the issue, the "magazine" offered details of the weekend’s events, fashion articles, photo layouts, important mitzvah information, VIP fashion show tickets, and a response card.

In order to "reflect" who they are as individuals and as a couple, two grooms decided upon using two long, rectangular dining tables with mirror tops. The cool, modern look was completed with Manzanita branches painted glossy black, which were joined at the ends and wrapped with crystal pendant drops to symbolize the men's union.

Someone's in the Kitchen, Tarzana, Calif.

"Moulin Rouge at the Milton"

In order to induce guests to contribute to a worthy cause, the caterer charmed them with a party with a sexy French vibe. The "Moulin Rouge" featured long cabaret tables designed to resemble can-can dancers' skirts, napkins clasped with garters, and a French menu featuring kir royale cocktails, French onion soup, tournedos Rossini and chocolate Eiffel Towers.

The only black-tie fundraiser in Toronto, the eighth annual Book Lover's Ball supported the public library foundation with a gala including a three-course dinner, an auction and the event's signature Adopt a Branch donation program. The evening's highlight was a spectacular finale that brought five featured books to life through performances by noteworthy Canadian performers.

Designed to help raised funds for Event Pros Take Action, a group that works to rebuild homes devastated by Hurricane Katrina, the "Forces of Nature" benefit used a raw warehouse as a stage for four 20-by-20-foot design vignettes depicting earth, fire, water and ice. Food was offered both in the vignettes and in common areas, inviting guests to explore and dine progressively through the night.

"From Farm to Fête"

Amidst a farmland setting, the event team created three distinctive venue spaces with a modern, sophisticated feel. Elegant tents for the ceremony and cocktails were followed by the dramatic reception tent: a glamorous presentation in black and white with stunning floral, tabletops and lighting.

BEST WEDDING: BUDGET $1,000 AND ABOVE PER GUEST

The event team pleased a detail-oriented bride with a dramatic ceremony and celebration at Andrew Mellon Auditorium in Washington, including such flourishes as a custom Lucite chuppah and 12,000 yards of specialty ribbon hand-cut and suspended from the ceiling. The event team overcame several tough challenges, including finding a new decor provider when the original vendor bowed out only 16 days before the wedding. 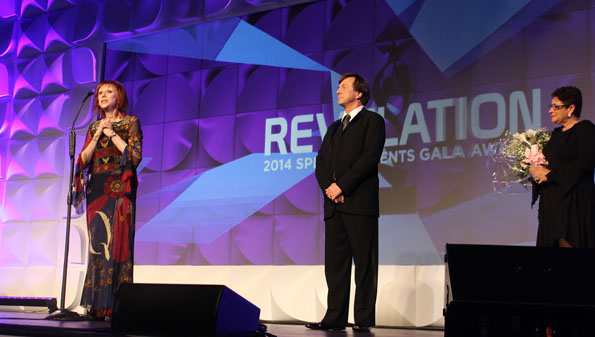 When the client asked for a redesign of its recognition program to make it more intimate and fun, the event team obliged, bringing two waves of 1,000 guests total to the Ritz-Carlton in Grand Cayman for a series of parties culminating in "Starry Night," a Van Gogh-inspired evening under the stars. Attendees gave the program a score of 4.97 out of 5, the highest mark in the 10-year history of this annual incentive.

"The New HTC One Launch"

This global roadshow took the message of Bayer's 150th anniversary to some 32,000 guests via a traveling exhibition of 22 containers that keyed on scientific issues with various target groups in mind. Each of the cases referred to one letter of the corporate message statement "Science for a Better Life"; they all fit in 40-foot container or on a single trailer.

The ceremony began with an elaborate aisle treatment of 18-foot-tall myrtle trees lining the walkway and overflowing with thousands of blooming branches. The couple exchanged vows under a natural birch branch and floral arbor structure, and then dined at tables with centerpieces featuring four different designs situated within the event floor plan; fresh-cut garden roses, phalaenopsis orchids, mini blush callas and echevaria were featured.

For a product launch by high-end jeweler Tiffany and Co., the event team was charged with installing a party structure for 400 VIPs at New York's Rockefeller Center, a bustling business and tourist landmark. The solution: A 39 by 31-meter clearspan structure at a custom 12 degree pitch wrapped with a custom 21-foot tall fabric façade created with trademark "Tiffany blue" fabric.

BEST USE OF LIGHTING

To help the Toronto International Film Festival celebrate the 50th anniversary of James Bond at its inaugural gala, the event team staged a complex event involving a custom venue site with a 12,000-square-foot barge, an 8,000-square-foot dining tent, and action stunts involving a helicopter, a Sea-Doo and an aquatic fireworks display. Complicating the action were gale-force winds and rainstorm warnings, which not only delayed production but forced the implementation of changes.

To bring the new HTC smartphone to second and third tier cities in China, the "Cube" campaign converted a truck trailer into a mobile exhibition unit that offered live performances, product showcases and interactive experiences for visitors over a four-month period. The campaign contacted 1 million consumers and sold an average of 100 smartphones each day.

The 2012 Democratic National Convention, held in Charlotte, N.C., was a showcase for politicians, lobbyists and dignitaries to gather together and support their chosen candidate for the next president of the United States. The event provided the stage for more than 35,000 guests to be served and entertained during the convention, meaning that producers, caterers, event planners and delegates required full event rental support on a 24-hour basis for the full week they were in Charlotte.

The Swan and Dolphin holiday lighting event in Orlando, Fla., integrated proprietary RGBW-1 LED lighting fixtures, developed and manufactured specifically for this event, and festive holiday music for the breezeway connecting the Swan and Dolphin properties. Guests of the resort were dazzled by an imaginative display located at the base of 36 soaring palm trees with three unique holiday themed shows.

To please an audience of 200 guests, ranging in age from 20s to 60s and hailing from more than 25 countries, the event team developed "Flashback"—a musical journey of medleys spanning the '50s, '60s, '70s and '80s. Dozens of hits and instant costume changes brought the audience to its feet.

Some 1,400 guests of the MGM Grand Las Vegas were treated to an immersive entertainment experience that used the event space as the stage to ring in the New Year. The production used a plethora of performance acts and artists including parkour, production numbers, street performance artists, a disc jockey, dancers and urban performance legends--all married with new technology.

The event team put the eye-catching Lamborghini Aventador Roadster on display at a product launch in Miami with a spin down Ocean Drive, a pop-up store in a high-end shopping district, and a drag race with a Boeing 777 at Miami International Airport. Some 400 international guests—including press, stakeholders and select VIPs—took part in the events; of the 200 international publications invited, 120 put their car on their cover.

BEST EVENT PRODUCED FOR A PRIVATE INDIVIDUAL: BUDGET UNDER $1,000 PER GUEST

"Dive in with Joseph"

For a bar mitzvah boy who loves to swim, the event team keyed on his favorite sport with touches including acrylic "bubbles" cascading down onto tables and  a "lap pool" dance floor with "pool handles" on the stage. The kids' tables had swimming stroke silhouettes suspended above, and guests departed with custom embroidered towels.

BEST EVENT PRODUCED FOR A PRIVATE INDIVIDUAL: BUDGET $1,000 AND ABOVE PER GUEST

"Around the World in 80 Years"

The 80th birthday celebration for a tycoon brought guests from around the world to Singapore for a remarkable five-day event that drew on the honoree's Ukrainian, Lithuanian and Jewish heritage as well as his business accomplishments. Highlights included a Shabbat dinner in the ArtScience Museum, a performance by comedienne Rita Rudner, a birthday dinner featuring stages on each side of the room, and a performance by Paul Anka with the Singapore Symphony.

To underscore the creative capabilities of the Olympus OM-D camera, the event team invited 12 international artists to turn a 7,500-square-foot space into an interactive exhibition of the theme of "Space and Art." Some 30,000 people visited the installation and used free cameras to shoot images, resulting in 24,000 Facebook fans and nearly 22 million photos.

Some well-traveled clients wanted an African theme event to top them all. As guests arrived in their African themed outfits to the “Safari Party,” they were greeted by a real elephant and two lively costumed tribal pygmies. Decor highlights included a 160-foot mural with a panoramic view of the Serengeti.

The event team had only four days to design and install seven fully detailed sets, complete with authentic wardrobe and props from the film, for a multi-day press junket for the movie "Man of Steel." Vignettes including Kal-El's journey on the planet Krypton and the offices of the Daily Planet, inspired by legendary minimalist architect Mies van der Rohe.

"The Daffodil Ball: The Great Gatsby"

BEST EVENT PRODUCED FOR A CORPORATION OR ASSOCIATION: OVERALL BUDGET UNDER $100,000

For the kickoff event for a month-long fundraising campaign benefitting United Way, company employees donned white coveralls and goggles so they could be "tagged" by professional graffiti artists with a message of unity and commitment. The employees then took their own cans of food-grade spray paint to tag one another—an activity that contributed to 65 percent employee engagement in the campaign and $1.5 million raised, both company records.

A giant pop-up book dubbed "The Book of Magic Heads"—a nod to creative minds—served as the backdrop for a prestigious new media awards competition. Every award winner was surprised by a new "page," and the approval ratings for the award ceremony, which had taken a back seat to the after-party, jumped from 42 percent the year prior to 92 percent thanks to the new staging.

The event team met Google's challenge of creating an "unforgettable" holiday party with "Rock and Royalty." Held on the grounds of Royal Hospital Kilmainham in Dublin, the festivities included everything from performances by Victorian-era strongmen to laser graffiti; a clear-top tent enabled guests to dine while enjoying projection mapping on the courtyard's walls.

BEST EVENT PRODUCED FOR A CORPORATION OR ASSOCIATION: OVERALL BUDGET ABOVE $500,000

Keying on the simple phrase "We are Bayer," the event team helped the venerable company celebrate its 150th anniversary with some 30,000 current and former employees and their families in the company's own premier league soccer stadium. With the goals of involving attendees and sharing the Bayer message, the activities used 1,500 Bayer volunteers as entertainers, from a young gymnast to the company's own philharmonic orchestra.