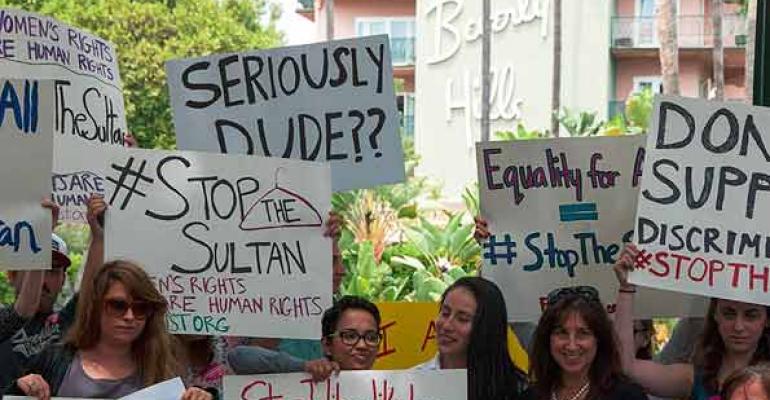 The decision of Brunei to begin imposing strict sharia law, which will include death by stoning for adultery and homosexual acts, has brought threats of boycotts against prominent hotels owned by the Sultan of Brunei, including the landmark Beverly Hills Hotel, the Hotel Bel-Air and the Dorchester Hotel.

Tensions over political stances taken by the tiny country of Brunei are being felt 8,000 miles away in Beverly Hills, where feminists and gay rights activists are threatening to boycott the landmark Beverly Hills Hotel, which is owned by the Brunei government.

Hassanal Bolkiah, who serves as Brunei's sultan and prime minister, owns the Dorchester Collection, which includes the Beverly Hills Hotel, the nearby Hotel Bel-Air and London's famed Dorchester Hotel. Last week, Bolkiah vowed to begin imposing strict sharia law in Brunei, which will include death by stoning for adultery and homosexual acts.

This news brought a swift reaction in Los Angeles, where celebrities including TV star Ellen DeGeneres promised to boycott the hotel. Tycoon Richard Branson, founder of Virgin Airlines, tweeted that no one in his family nor any Virgin employee will stay at Dorchester properties "until the Sultan abides by basic human rights."

Protestors held a rally outside the hotel Monday.

EVENTS CANCEL IN PROTEST Groups that have already cancelled events at or vowed not to return to at the Beverly Hills Hotel, according to the Los Angeles Times, include the annual Global Women's Rights Awards, hosted by former "Tonight Show" host Jay Leno and his wife, Mavis, the Hollywood Reporter's annual Women in Entertainment breakfast, the Motion Picture and Television Fund's Night Before the Oscars, and the Teen Line fundraising luncheon.

Last night, the Beverly Hills City Council approved a resolution condemning the new laws and urging the Brunei government to divest itself of the Beverly Hills Hotel. Hotel employees also spoke at the event, urging the council to remember that boycotts threaten workers' livelihoods.

Official Statement from Dorchester Collection CEO on the Boycotts

Special Events reached out to the Dorchester Collection for comment and received this statement from Dorchester CEO Christopher Cowdray:

While we recognise people’s concerns, we believe this boycott should not be directed to our hotels and dedicated employees. The economic impact of this not only affects our loyal team members but extends to the local community, our valued partners and suppliers.

Today’s global economy needs to be placed in a broader perspective. Most of us are not aware of the investors behind the brands that have become an integral part of our everyday life, from the gas we put in our cars, to the clothes we wear, to the way we use social media, and to the hotels we frequent. American companies across the board are funded by foreign investment, including Sovereign Wealth Funds.

During this challenging time, we have been deeply touched by the tremendous support received from our loyal guests and long standing business partners who recognise that Dorchester Collection hotels are part of the fabric of their local communities. We will continue to honour their iconic heritage and remain committed to our core values of integrity, equality and diversity.

Take our poll: Has your hotel or a hotel where you have an event slated to take place ever been threatened with a boycott? Please let us know in this anonymous poll, located on the lower middle of our home page.