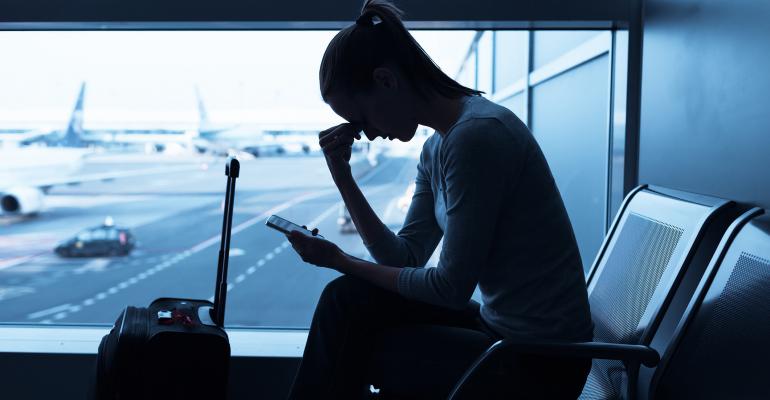 Lots of travelers worry, but the well-prepared people worry the least, this new survey says.

Terrorism is only one worry on the mind of travelers, says a survey released today by global travel management company Carlson Wagonlit Travel—and it’s not No. 1. Also, worries vary by region, the survey reveals.

“Despite recent terrorist attacks, business travelers say they’re more worried about other things – and that’s surprising,” said Simon Nowroz, Carlson Wagonlit Travel’s chief marketing officer. “We found that, yes, the world seems scarier at times – but travelers believe they have more tools at their disposal to keep them informed and safe.”

Terrorism only ranks fifth (35 percent) among safety concerns, despite the high visibility of terrorist attacks. “Forgetting something needed for work” ranked higher (40 percent), as did “losing something important” (38 percent), “being robbed or attacked” (37 percent) – and even “weather conditions” (37 percent).

The “CWT Connected Traveler” survey of more than 1,900 individuals found that two-thirds (67 percent) of business travelers believe travel is safer today than in the past as they have more tools to mitigate safety concerns. Seven out of ten travelers use at least one of their employer’s security protocols, such as traveler tracking or emergency contact profiles. Also, more than two-thirds (68 percent) buy travel insurance.

The study did reveal several findings of concern. For example, one in five travelers have cancelled a trip due to concerns about their safety and security. And 30 percent say they are worried about their health and wellbeing when it comes to traveling.

Worries Vary by Region
The study revealed some intriguing regional differences between the Americas, Asia Pacific (APAC), and Europe, Middle East and Africa (EMEA). For example, only 7 percent of APAC travelers said they were “not concerned” about personal safety while traveling for business. That percentage rose to 12 percent for Americas travelers and 21 percent among EMEA travelers. This is reflected in the fact that APAC travelers appear to be better prepared. For example, more than half (52 percent) of APAC travelers maintain an up-to-date emergency contact profile compared with 38 percent in the Americas and only 34 percent in EMEA.

“Today’s travelers are sophisticated,” Nowroz says. “They’re signing up for alerts, they’re paying attention to the news and they use the available tools at their disposal. So while travel may seem risky, they’re taking steps to stay safe.”

About the survey
The CWT Connected Traveler Study was created by Carlson Wagonlit Travel and conducted through Artemis Strategy Group March 30-April 24, 2017. Survey data was collected from more than 1,900 business travelers between the ages of 25-65 from the Americas (Brazil, Canada, Chile, Mexico and the United States), EMEA (France, Germany, Italy, Spain, Sweden and the United Kingdom) and APAC (Australia, China, India, Japan and Singapore). To participate in the study, business travelers were required to have made more than four business trips within the past 12 months. The purpose of this study was to understand how business travelers stayed connected to both work and home while on the road.