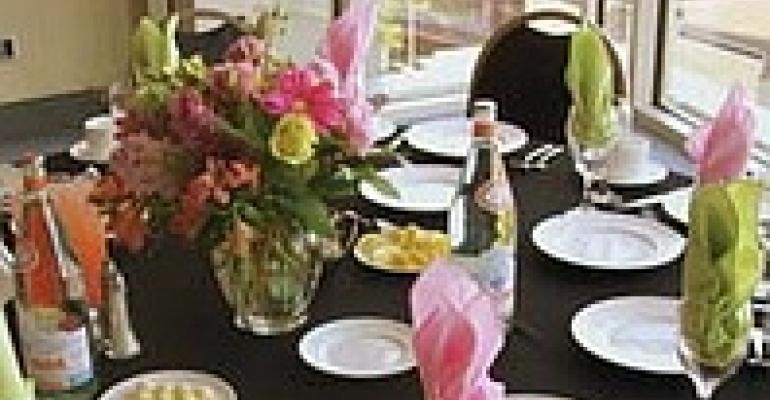 AKA's Huge Banquet is One for the Books

Losing 100 apple-green napkins at the last minute was a problem. Yet it was a tiny problem in light of how big the event was. On July 18, Stamford, Conn.-based contract caterer Centerplate served a sit-down dinner to more than 17,600 Alpha Kappa Alpha sorority members at their centennial anniversary celebration. The event--held at Walter E. Washington Convention Center in Washington--has been recognized as the largest banquet-style dinner in the history of conventions by the Guinness Book of Records, organizers say with pride.

IT’S ALL IN THE NUMBERS

The numbers are mind-boggling. To serve the meal, the event team set some 300,000 dining utensils and tableware pieces on 3.5 miles of table linen. Los Angeles-based Custom Linens brought in 7 miles of pink and green napkins, a nod to the sorority’s colors. To accommodate all of the attendees, the banquet was held in six separate spaces inside the convention center--three ballrooms were set for 3,000 guests, two halls for 8,000 guests, and a third hall for 6,600 guests. And in the event of overflow, the nearby Grand Hyatt Ballroom geared up to accommodate up to 3,000 diners.

A LITTLE HELP FROM PEERS

Although Centerplate vice president Gary Prell notes his company has plenty of experience handling major events--Centerplate has catered presidential inaugurations, all-star baseball games and conferences for Microsoft, McDonald's and Hewlett-Packard--the event team couldn’t have pulled off an event of this magnitude without calling in reinforcements. “We frequently ramp up for events such as this by using internal talent from other venues in our portfolio,” Prell says. The Washington-based team brought in 300 cooks and chefs from sister venues along with 46 managers, 65 captains, 32 distribution assistants and 1,200 waiters; the U.S. Armed Forces’ culinary personnel pitched in as well. Full-time and temporary servers--184 in total--aided in the record-breaking plate-up. They not only stepped up to the challenge but excelled at their jobs, Prell says: “Our primary objectives were our ability to deliver a customized meal of high-quality and imagination--hot and on time.”

Although the Washington Convention Center supplied enough tables, cooking and culinary support equipment--such as coffee pots and glassware--were brought in from Centerplate venues Colorado Convention Center, in Denver, and New York’s Javits Center. The culinary team prepared the dinner in three areas--in the center’s main kitchen, in makeshift kitchens on the building’s lowest level, and in a tent erected on the loading dock. The tent kitchen was equipped with 12 double-stack convection ovens, where 120 trays of beef Wellington baked at any one point during the event.

And what do you serve thousands of hungry sorority sisters? Although catering for such a huge group ruled out some menu options, Prell notes, Centerplate followed its customary procedures, allowing a 20-member client committee to taste-test several menu options. In the end, 5,400 pounds of beef filet, 2.25 tons of mashed potatoes and 1,800 gallons of pink lemonade--another nod to the sorority’s colors--pleased guests. The history-making meal began with iceberg wedge salads featuring goat cheese, grape tomatoes and handcrafted green grape vinaigrette. The beef Wellington entrées were enhanced by some 280 gallons of sauce bordelaise; roasted vegetables and 17,400 fresh baby carrots joined the potatoes on the side. The sweet finale: slices of “red velvet" cake--tinted pink for this occasion--with apple-green frosting.

And the missing napkins? They turned up the day after the event. “Lots of manpower was used to not find those napkins on time,” Prell recounts. --Elizabeth Arnold