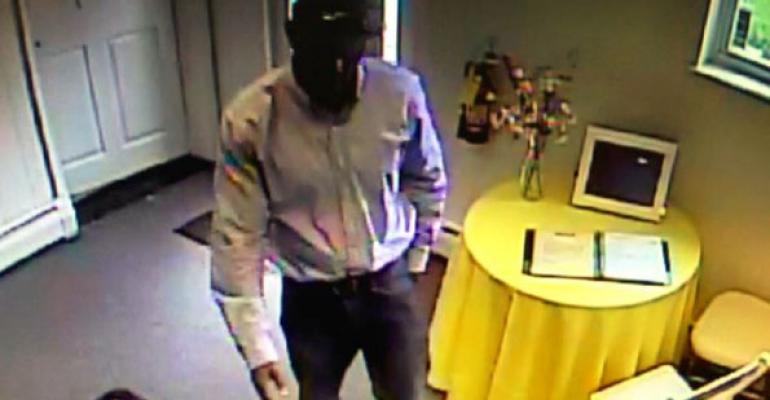 Video of the alleged scammer at Preferred Party Place
Rental

Stop that Scammer: Party Rental Bands Together to Stop Thieves

The party rental industry in the Northeast is abuzz with the news of a scam perpetuated on a New Jersey rental company last month. Preferred Party Place of Sicklerville, N.J., processed the credit card payment—which went through—of a "client" who called in the order, then came to the operation and drove off with 300 white chairs, 30 60-inch round tables, four white wooden bars and two carpet runners.

The items—worth an estimated $14,000--have not been returned.

Mike Boyle, Preferred Party Rentals owner, tells Special Events that the police have taken his video of the "client" and the license plate on the truck that the scammer and his accomplices used to haul the inventory away. Evidently, the team used the same credit card to purchase party rental equipment in Massachusetts the day before. (See below for the credit card information provided by the scammer.)

WHAT WENT WRONG "We had one major flaw that was the cause to why this happened without being caught before it happened," Boyle says.

"The guy placed the order over the phone and paid for it in full over the phone. Our policy is to verify the photo ID of the person renting the items before the items leave our warehouse but we never asked for the credit card unless there was a balance due," Boyle explains. "Since this person paid for it in full, when he came to pick the equipment up, all we asked was for an ID to match it to the paperwork."

Boyle adds, "If we would have asked for the credit card, the guy would have either said he didn't have it on him since the name would have been different, or if he did have it, we would have seen that the names didn't match up. We didn't know that the credit card was a fraudulent card until Monday morning, when the actual owner of the card called questioning the charge from the Wednesday before. This is when we looked deeper into the order and I viewed it on tape."

Contributing to the problem was that the thief chose a busy day to hit the operation.

"The day the man came in was just like any other very hectic day," Boyle says. "Our delivery personnel were loading their trucks for the day. The office was jumping with walk-in customers and scheduling, so there was a lot going on. On top of that, I personally was not in the office at the time and didn't know that this order had been placed until it was too late."

He adds, "Now looking back, I know that I would have questioned this order and the individual at the time he came to pick up."

On the bright side, the theft was an anomaly, Boyle says.

"My business has been around for over 25 years and we have had a few incidents over the years where a small order was not returned and we got burned for it because the credit card wouldn't work, check bounced, etc.," he says. "We have never had one quite like this one."

SADDER BUT WISER The episode has prompted Preferred Party Place to change its procedures.

"Since this has happened we changed our policy for customer pickups," Boyle says. "Anyone picking up equipment must have a photo ID, which we photocopy, and the credit card has to match the person who is picking the equipment up--whether it's paid in full or not."

Sad to say, the crooks who prey on party rental work fast.

"Unfortunately, we are in an area of the country the seems to attract the criminal element," says Steve Kohn, president of Miller's Rentals and Sales in Edison, N.J. "Usually when it does happen, the criminals will hit several locations in the quickest time possible before word gets out or a rental store gets wise and they are caught."

Jason Campisi, manager and owner of South Jersey Party Rentals in Haddon Heights, N.J., notes that his company was hit with a similar scam in 2012.

"This was a couple that came in, sat at the desk of our event planner, letting her guide them in their order, and drove away with 100-plus tables, 100 chairs and some additional small items," he recalls. "After two weeks of repeated calls, a trip to the local police yielded results."

Campisi adds, "Because South Jersey Party Rentals has a policy that each client needs to give a date of birth that matches the license number, the police are able to identify fake licenses, and a visit from them resulted in the return of our equipment in less than 24 hours. Although this happened last year, it is an isolated incident at our local level, as we turn down residential and business clients that cannot provide proper credentials."

But Kohn notes that the local industry fights back.

"I’m glad in New Jersey we have a good communication system," Kohn says. "Besides social networking, we frequently call, text and email one another when we suspect foul play or even to be aware of a potential client that could be troublesome. In general I believe we watch out for each other’s back."

STOPPING THE SCAMS How to clamp down on crooks? Here is some advice:

"The best advice is to get paid upfront--including a sizeable security deposit--when even the slightest doubt is present about a client’s ability to pay," Kohn suggests. "If you have bad 'vibes' about a potential rental and feel there is the possibility that the equipment will not come back maybe the best thing to do is not rent to that individual.  The last line of defense can always be, 'I’m sorry that equipment is already reserved this weekend.'"

Matthew Davis of USI Rental Specialties, which provides insurance in the rental industry, suggests getting special coverage for these scams.

"Theft by deceptive practices is common in the rental industry and that’s why it is important for rental dealers to have conversion coverage on their insurance policies," Davis says. He adds, "The rental dealer should get as many forms of ID as possible, at least two. They should also make sure the credit card is valid. Lastly, I recommend getting the license plate number of the renter's vehicle."

RARE CRIME On the bright side, party rental veterans agree that this scale of theft is rare.

"Our industry is very vulnerable and easy to steal from," notes Dan Skena, owner of PartySavvy in Monroeville, Pa. "The good news is that very few people think of stealing our sort of equipment; there's not much of a market for it. When we were in the tool rental business, we lost a lot more equipment through conversion--a rental customer doesn't return the rented equipment."

"Fortunately, there doesn't seem to be much of a market for stolen party rental equipment," Skena adds. "My guess is that this person was basically renting / stealing this equipment for someone who knew what they wanted and knew what they were willing to pay. He did the deal for a pre-determined amount of money, which he then used to buy drugs, or whatever; he wouldn't steal it in the hopes that he could sell it. He basically was filling an order for someone who wanted this equipment at a good price."

CATCH THAT CRIMINAL Information from the bogus charge at Preferred Party Rentals: