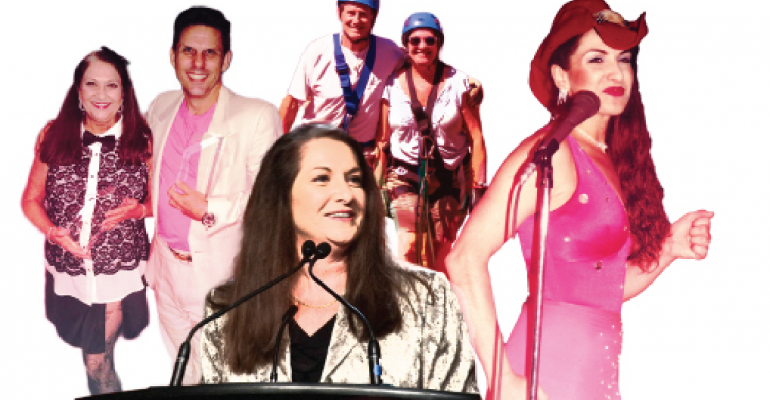 Connie Riley’s career has gone from being a self-described “chick singer” in a traveling band to vice president of a global entertainment agency. And she’s nowhere near done yet.

When you ask people in the business how they would describe this year’s Special Events Lifetime Achievement award winner Connie Riley, CMP, CSEP Emeritus, the words just flow: Trustworthy. Honest. Fearless. Hardworking. Leader. Advocate. Mentor. Innovator. Rock Star. But the most descriptive may be the Mandarin word “Lĭjiě”, says Robert Rogers, CSEP, with Hong Kong-based Events Man, who has known and worked with Riley for years in her role as vice president with T. Skorman Productions in Orlando.

Lῐjiě means to have a deep understanding of something, “the way an old boat builder knows how to build a boat that can withstand the roughest sea,” Rogers said. “Connie Riley’s ‘Lῐjiě’ of talent management is built on years of experience and her unsurpassed emotional intelligence.”

Adds Heather Pilcher, CSEP, CMP, CEO/Executive Producer, Blue Spark Event Design: “Connie Riley is a force within our industry. Everyone knows her or knows of her either through her work or through her service within the industry. We are blessed to have her involved. She makes our industry better.”

From stage to agency

When people call her a rock star, they’re not speaking metaphorically. Riley parlayed her love of singing and performing into an early career as a singer in a society band in Washington, DC, and then in a traveling band playing everything from disco hits to jazz and hard-core rock-and-roll, complete with then-legal homemade pyrotechnics. She learned the basics of production and operations during her time performing everywhere from supper clubs to a main stage at the Calgary Stampede.

“We learned it wasn’t our job to bring the people to the club, but it was our job to keep them there,” she said. “We were already training how to work in the business.”

So how did she go from being a self-described “chick singer” to vice president of a global entertainment agency? When the time came to give up her life on the road 33 years ago, Ted Skorman offered Riley an opportunity to open the corporate department of T. Skorman Productions, and she jumped at it. Orlando, where the agency is based, was on the brink of transforming from a small town to a major entertainment and convention hub, and “we were at the right place at the right time” to expand with the city, she said. Riley has since worked in all aspects of the business, from logistics and operations to sales.

“Our strength has always been not just acting as an agent, but producing the entertainment as well,” she said.

But don’t short-change the importance of that agent experience, says Rogers.

“In the past all the agents I worked with did little more than make a couple calls and charge a small fortune, he said. “Connie showed me the value that a good agent brings to an event. Her search for just the right act includes poignant questions about goals, desires, and client dreams. Her presentation includes potential pitfalls and possible highlights. She understands exactly what the artists need to make it the best show possible, the obstacles a producer faces, and the attributes a venue offers. Onsite she is there for delivery to iron out any unforeseen circumstances. She is honest and has a high care factor about her work.”

The combination of caring agent and high production values placed T. Skorman in good stead as the world around them changed dramatically in 2020. They had to quickly shift from providing live to custom virtual entertainment.

“We find the talent, we write the script, we produce it, we film it, we edit it, we get the client approval, and it’s all TV-level quality,” Riley said.

Additionally, since live music takes up a lot of bandwidth and could be iffy if an attendee’s internet connection isn’t great, the demand now is more for non-music entertainment ranging from magic shows to wellness.

“We’re building an unbelievable catalogue of talent,” she said.

While she fully anticipates in-person events will return, Riley also believes the increased participation clients have been getting during this dip into digital will mean the virtual element will be here to stay as a hybrid complement to live events.

“I’m really excited about what’s to come,” she said. “To be in the entertainment business, you must be chameleons, innovators, and trend-setters. It’s going to be different, and it’s going to be exciting.”

If there’s anything that ignites Riley’s passion more than helping clients and her ever-growing entertainment “family,” it’s volunteering her time and energy to help others both in and outside of the business.

“My mother instilled in us that service is an important part of life,” she said. “She was an unbelievable mentor.”

Riley’s volunteering started at age 14 when she served as a candy striper through the American Red Cross. She also formed a Neighborhood Watch for her area and has been a lifelong supporter of organizations such as Be the Match. Professionally, she has volunteered her time for the International Live Events Association (ILEA), including having served as president, as well as with Meeting Professionals International (MPI).

“Connie has made a huge impact in our industry through her strong advocacy for our industry, her desire to bring ‘best in class’ entertainment solutions forward and her desire to be the best role model she can be for the industry,” said Kathy Miller, Managing Director, Get Real Training and Development, who has worked with Riley both professionally and through volunteering with ILEA. “She shows that anything is possible with grit, hard work, and dedication.”

Having worked as an entertainer and an agent in a heavily male-dominated world, Riley makes a point of mentoring young women who are trying to make it in the tough world of entertainment.

“As a female of my generation, I was never tall enough, never skinny enough, never sang well enough—the emphasis was always on the negatives, never the positives,” she said. “That’s why it’s a huge mandate for me to remind the girls I represent that this is the best time of your life—enjoy it! I make sure to make it safe and comfortable for them so they can do their best work.”

Riley also loves speaking to elementary schoolkids about careers in the entertainment industry. While she has adored being able to work with “bucket list” celebrities such as James Brown and Patti LaBelle, the energy she gets from working with kids and being able to pass on her passion for her work to the next generation has been even more fulfilling, she said.

“The younger kids are definitely my favorites,” she continues. “I come out of those classes of elementary school kids on cloud nine.”

Part of that may be because she’s still a bit of a kid herself.

“I’m not afraid of my age because age is all in my mind,” she laughs. “I’m not a chic girl. I don’t love designer clothes. It’s the little things that make me happy—it can be as simple as a song.”

Her philosophy is equally simple: Enjoy what you do.

“If you enjoy what you do, the rewards are endless. It’s been an amazing career—and it’s not over. Especially now, there’s going to be so much to discover and rebuild,” she said. “One of our sayings is, ‘Always reach above your head.’ Go for it.”