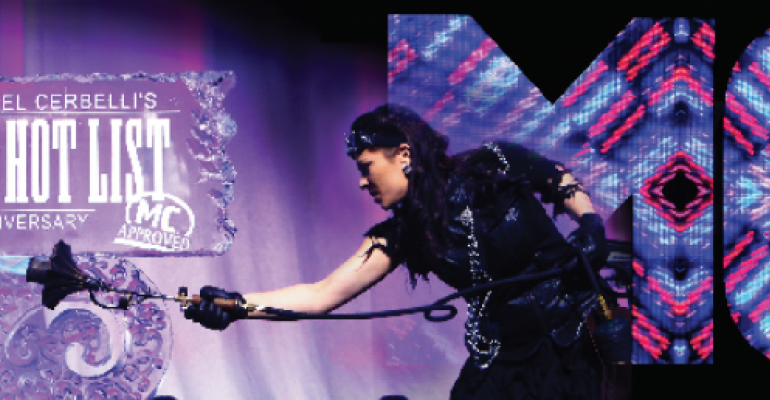 It’s hard to convey the personality of Michael Cerbelli with only words on a page. There are wide gestures, big laughs, he’ll drop your name in when talking (which only serves to make a person feel special) … and he will segue from a serious topic into minute personal bits about himself (such as his Brooklyn accent: “Marthar Stewart,” anyone?) in a most endearing way. More laughs, more gestures, more personal anecdotes. Try to keep him contained? Never, never.

Never in a million years.

You will get him live at Catersource + The Special Event when his The Hot List (THL) returns for its 20th anniversary on Thursday morning, July 22; but for the purposes of this feature…words on a page, some photos, and a video link will have to suffice.

The spark that brought Hot

First up, I had to ask Cerbelli about the origins of his very popular namesake event. After all, it’s his 20th anniversary; there has to be a bit of reflection and historical context to start any profile piece. “What happened was,” he says, “I didn’t really start doing conferences etc. until the mid-’90s. By the time 2000 rolled around, I needed tangible information. I was hearing war stories about an event and how they did it, but I wasn’t getting what I needed [to do business afterward].”

The first iteration of THL was born as Cerbelli sat in a classroom and watched a speaker set a vase on a table. The speaker clicked a switch and the vase lit up. “The audience went, ‘ahhhh!!’” says Cerbelli.

“Then the guy took out a little key and the vase started changing colors. He said, ‘This is going to be hot, guys—this is LED technology!’

“Everybody went, ‘LED technology?! What’s LED? That’s cool!’” Cerbelli laughs. He said he tried to get the name of the supplier but was unsuccessful.
“It frustrated me so much, Kathleen, that I said, ‘next year I’m gonna open up my little black book of ideas and do it myself!’”

See Michael Cerbelli's: The Hot List™,  during The Special Event, co-located with The Catersource Conference & Tradeshow, on Thursday, July 22 at 8:00 a.m. Learn more

In August 2001, “Michael Cerbelli’s 101 Hot Event & Entertainment Ideas in 90 Minutes” debuted at the Event Solutions conference. “I literally gave away 101 ideas in 90 minutes! I was sweating by the end!”

“I had a typed-out list back then that we would do on the computer and would give it to everybody: here’s your

contact information.” He notes that some designers didn’t like that he was giving away secrets, but now, “In a Google society where you can type something in and find it, The Hot List takes it one step further. You don’t have to go searching for it. I’m sharing the wealth.”

Over the years, THL has evolved into a 90-minute format with about 36 hot ideas each with under four minutes on stage. It is just enough time for people to see the idea, evaluate it, and think, ‘I’ve got it now, this is how I can use it for my event.’

“Instead of watching a YouTube video or TikTok or something like that,” says Cerbelli, “seeing it live on the stage presented that way—they know it’s going to be quick, they know it’s gonna be fast, and if they don’t like it there’s a new idea coming in three-and-a-half minutes.”

Says Cerbelli, “I know I talk very quickly and very Brooklyn in the three-and-a-half minutes they are getting in that spot. They [also] realize that we woke up a very small percentage of the audience. But we always say that if there are 3,000 people [in the audience] and you get 12 phone calls, you’ve done really, really good. If you book six of them, you have more than paid for yourself to be there.”

Cerbelli notes, however, that THL 2021 will be a different beast than prior years. “People in this industry were immersed in a horrible year and are just getting their feet wet again. The caterer that had nobody to serve, event professionals that left the business and started new careers.

“It just hit me the other day, you know? We’ve been out of the pool for a year and the water is a little cold. Let’s get in the water and warm up until we can really start swimming again.”

To that end, he is, “creating a show that makes sense for 2021, really makes a wow, and has the right things up there [on stage].”

Life on the line

It isn’t just the knives he has had thrown at him on stage over the years, or being catapulted into the room, or shot out over the audience via a bungee cord—literally life on the line—but it’s also…personal life. A pregnancy was announced. He went 10 minutes over in 2015 when he brought a special someone onto the stage in Anaheim, CA at The Special Event…and then proposed marriage to her (his now spouse, Denise). His daughter, Kelsie (now 11) introduced his show at TSE in 2019. “It’s been amazing stuff over the years, Kathleen, really amazing stuff.”

With that, I asked Cerbelli to talk to me about his Top 10 moments over the past 20 years. In true Cerbelli fashion, there are (of course), more than 10 moments. Here’s a look:

“I’ve got another Michael story for you,” he says.

Cerbelli explains that they were cleaning up their old NYC space in preparation for a move to TwoFortyThirty, a gorgeous event space in Manhattan that just recently held its first live event.

“There were people cleaning. There are old Hot List shirts all over. I say, ‘Get rid of them! We’re moving!’”

Sara Meletis, Cerbelli Creative’s Director of Operations & Production, drops a box of shirts next to a Goodwill bin on her way home. The next day on her way in, she sees the box is gone.

Top moments over the past 20 years

Ideas off the original 2001 program

The Many Portraits of Michael Cerbelli (artwork created live on stage)

MC: Amazing. I say to everybody that is one of my favorite moments of all time—Brett ending the show right as COVID shut down the industry, because [the show] couldn’t have ended with a better message that was never planned. λ