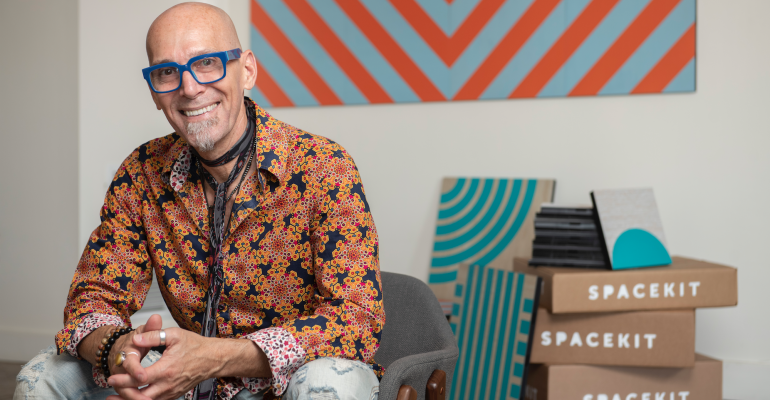 Catch up with Rob Barber and ATOMIC during Catersource + The Special Event and hear about their Super Bowl Halftime Show experience.

During the Super Bowl LVI Halftime Show, the football field transformed into a glittering sea designed to look like nighttime in Compton. 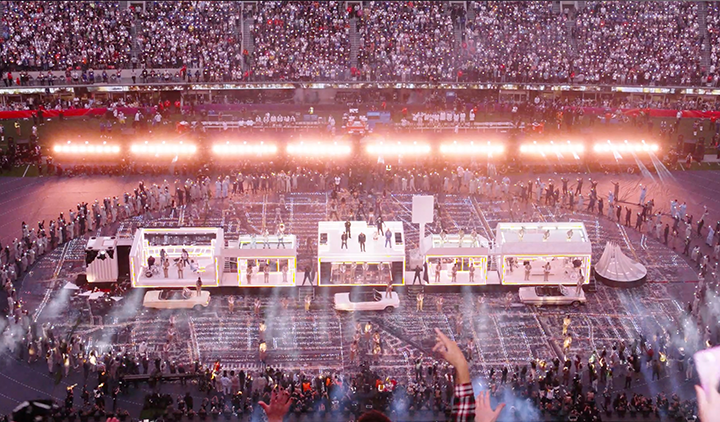 Dr. Dre, Snoop Dogg, 50 Cent, Mary J. Blige, Kendrick Lamar and Eminem performed on a large, white multi-piece stage. But when the camera panned up to an aerial view, those tuning in at home could see the shining city grid illuminated in LED lights.

Special Events caught up with Rob Barber, Vice President of Modular Systems + R&D at ATOMIC and Catersource + The Special Event speaker to learn how the team at ATOMIC transformed a the football field into a nighttime aerial view of Compton with LED lights.

Special Events: How did the opportunity present itself?
Barber: We helped build part of the set for last year’s halftime show, so when the Super Bowl LVI Halftime Show design team was working on developing the concept for this year’s show, they reached out to see if we could help again.

SE: What were you all tasked with?
Barber: ATOMIC was tasked with making an entire football field look like the nighttime aerial view of Compton, CA. When the Halftime Show’s design team reached out to us, we were excited by the challenge and realized, this wasn’t going to be any ordinary halftime show!

SE: How did you approach the job?
Barber: Our team immediately started doing what they do best, creatively developing something tangible from a concept. Starting in November, our Account Manager, Alix Reynolds, and our Program Manager, James Rogers, began the project by outlining a timeline, confirming designs, and working with the internal departments.

SE: What was the vision?
Barber: Es Devlin explained that the stadium ground covering was inspired by Dr. Dre visiting a place called Memory Palace - a re-imagined model city map of the world at Pitzhanger Gallery in Ealing, London, which plots the location of 73 millennia of significant shifts in human perspective. Dre was immediately interested in the idea of ‘placeness’. He knew Compton would be a protagonist in the design and that we could etch a map of Compton on the global Super Bowl stage.

SE: What were the challenges?
Barber: Our team used 31,000+ square feet of printed fabric to create the field cover that set the stage for the Pepsi Super Bowl LVI Halftime Show. The entire piece was created by our graphics team digitally stitching together 1200 photos of an aerial map of Compton, CA. Then, our soft goods team sewed 16,000+ individually controlled LEDs into the fabric. Because our on-site team only had about 8 minutes to load in once the 1st half of the game was over, and about 6 minutes to tear down after the halftime show concluded, the piece was separated into about 20 sections. 12-15 people were assigned to each section and on cue, they were strategically placed on the field to appear as one giant map of Compton. It was incredible watching everyone pull it off!

SE: What is it like doing something so large-scale, mainstream, high profile?
Barber: ATOMIC is always excited and energized by a challenge. It’s amazing to see our team in action, regardless of the show or event size, but it was particularly awesome to watch our team come together on this specific project.

SE: Have you ever worked on the Super Bowl before? If so, how does it change from year to year? How do you approach each one differently?
Barber: ATOMIC has been fortunate to work on the halftime show for two years in a row. The designer’s vision and concept are unique to each halftime show so it’s been a new challenge for our team each time.

SE: What did you think of the final product/performance?
Barber: Seeing everything come together was amazing and energizing! Witnessing the hard work our team put into it up front, and all the talented companies, artists, and individuals that came together to collaborate was incredible.

SE: How many man hours did it take to install everything?
Barber: The actual set-up time on the field is about 8 minutes, but there were weeks and weeks of pre-planning and rehearsals before that to make sure everything would install quickly and smoothly during commercial break.

Collaboration is exactly what Barber will be discussing next month at Catersource + The Special Event during his session.

Spare a Square? The Business Value of Collaboration

Toilet paper shortages, plywood shortages, labor shortages, now more than ever it's important to lean on each other and find new and creative ways to collaborate at every level! Stretch your mind and your muscles in this session where "hands-on workshop" meets "case study storytelling." Learn how collaboration became the secret ingredient for The Rock Lititz campus (rocklititz.com) to come together on events like the Video Music Awards, the Super Bowl Halftime Show, or WrestleMania. Join Rob Barber, VP of Modular Systems and R&D, as we sharpen our collaboration skills together and find out how to apply collaboration to any business.