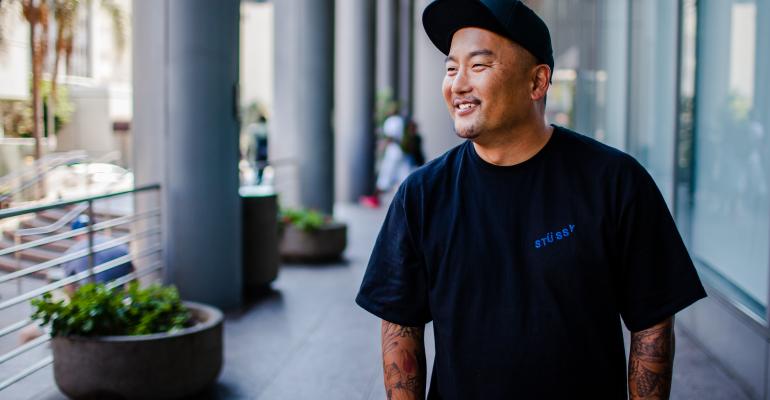 Roy Choi was born in Seoul, Korea and raised in Los Angeles, California. One of the architects of the modern food truck movement through Kogi BBQ, Choi merges food and social media with community, honoring the street food culture that laid the path before him.

Host of the civic-minded Emmy Award winning series ‘Broken Bread’ on KCET/Tastemade, which won him a James Beard Foundation Award in 2020 for Outstanding Host in a television series, Choi challenges the status quo, meeting with inspiring individuals and organizations who use food as a platform for activism and a catalyst for change.

Choi spoke about one of his initial successes, Chego!, in a recent episode of ‘Broken Bread’ (Season 2, episode 4, Returning to Chinatown), and how it changed his mindset. “I didn’t know opening a small 500 square foot rice bowl restaurant in [Los Angeles’] Chinatown would spark a food movement that pushed a lot of people out. I was not really thinking about what the implications would be or what disparities existed. Almost 10 years later I realize that [restaurant] gentrified the town. At that time, it was hard for me to see the forest through the trees. There are people here and if in some way, I’m part of the recipe of the displacement of Chinatown residents…I want to stand up and do something about it.

On a global scale, Choi is co-host in the full blown Netflix cooking series ‘The Chef Show’ with Jon Favreau. He is also a graduate of the Culinary Institute of America.

In 2010, Food and Wine magazine named him Best New Chef. His cookbook/memoir L.A. Son was a New York Times Bestseller in 2013. In 2016 he was named TIME 100 Most Influential People in the World. And in 2017, LocoL in Watts, received the first ever Los Angeles Times Restaurant of the Year award.

Choi resides in Los Angeles where he is a voice and advocate for street food culture past, present, and future, and the co-owner, co-founder, and chef of Kogi BBQ, Chego!, Best Friend at Park MGM Las Vegas, and LocoL.