Why Being Number Two Is Second to None 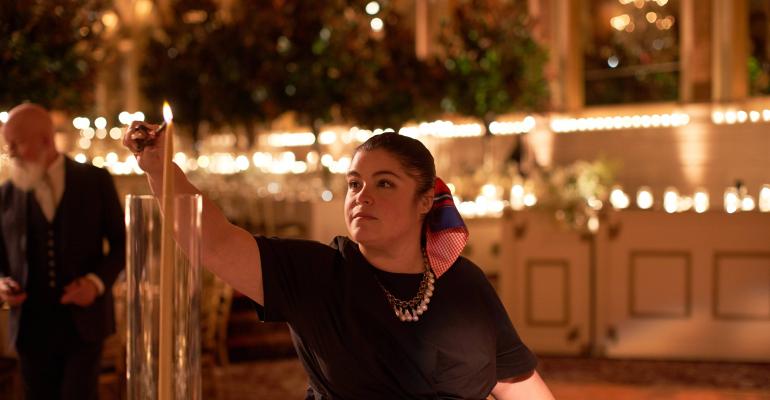 For some people, being called “Number Two” would not necessarily be super exhilarating. Not Christina Matteucci. Also affectionately known as TeucciMama: The Mother Hen of the Number Twos, the Executive Director of David Beahm Experiences, former actor, speaker, and opening keynote for this year’s Catersource + The Special Event, Matteucci thrives in her position as second in command—or as she puts it, “number-one-adjacent”— to the legendary visionary, David Beahm.

We caught up with Matteucci recently to learn more about why she believes being second really makes a person second to none.

Special Events: How did you start out in this wild and wonderful world of catering and special events?

Matteucci: I graduated from the NYU Tisch School of the Arts in May of 2001 ready to be Broadway’s next big thing. Then my grandmother passed away in June, and my 57-year-old father passed away unexpectedly in July. Then 9/11 happened, and I went from having the world by the tail to having that tail spin me around. With my entire world turned upside down, I just didn’t have the emotional capacity to go out for auditions, so I took a thankless retail job and went home every night and grieved for my grandmother, for my father, for the city, for what had seemed like such a promising future just six months earlier.

The one thing that made me happy was to flip through the pages of my beloved bridal magazines, which I’d been subscribing to since I was 12 years old. Then one day, I thought, “If this is the only thing that’s making me happy, why don’t I do this?”

See Christina Matteucci LIVE. Join keynote Christina Matteucci as she kicks off the 2022 Catersource + The Special Event cwith her session, I Know You’re the Boss, but... High energy, inspiring and with exceptional takeaway ideas, Christina Matteucci, Executive Director for David Beahm Experiences, will leave you charged up for a profitable year! Get all the details at www.thespecialeventshow.com.

So I went down to the internet café on my day off, and I signed up for this newfangled website called theknot.com and created a profile as a fake bride. I found all the designers in the industry and sorted them by how expensive they were, not knowing how else to figure out who’s good. Then one day, along with names like Colin Cowie and Preston Bailey, I saw this name that I’d never seen before, David Beahm. I did some research and discovered that although he was relatively new on the scene, he had just done Catherine Zeta Jones and Michael Douglas’ wedding.

Okay, I thought, this guy is an artist—he probably just needs some organization. I could help him create his business. I didn’t know anything about this man, but I knew that he was the one.

So the first Monday of the month, I would fax him a cover letter and a resume. And every Wednesday, I would call his office to make sure he got the fax and see if there were any openings that month.

That went on for eight months before he finally gave me an interview.

I started as a secretary and I made myself indispensable over the next 20 years. Slowly but surely I started writing his proposals. I started meeting with clients. I started handling my own accounts and we’ve been together ever since.

Special Events: What is it like to be second-in-command at David Beahm—how is it empowering to be in that position?

Matteucci: From the start I treated the job like it was my name on the door, even though it wasn’t. I had been one paycheck away from waiting tables, and I knew my lifestyle in the city depended on making this opportunity a success. It was challenging. It was emotional. It was educational. It was thrilling. It was scary.

But the brilliance about being a number two is that it’s a masterclass in entrepreneurship, only without any of the risk. I get to make people happy. I get to make magic. I get to collaborate with my team. I get to be inspired by an amazing leader. I am credited on social media and beyond and paid well. I’m rewarded for my loyalty with time off. I travel the world on somebody else’s dime in luxury, and I have zero legal liability.

It can be a massive steppingstone for eventually owning your own business for those who aren’t ready to take the dive immediately. It can also create a lifelong partnership, which is what David and I have. It is extraordinarily fulfilling, both professionally and personally.

Special Events: What can others learn from your experiences in this amazing field?

Matteucci: Persistence is key, but so is trusting your gut. There was something in me that just knew this is the guy. I had the wonderful genius naivete of those who are young enough to believe anything is possible and I listened to that in a way that I think is more difficult as you get older. If we can tap into that, no matter how old or jaded we get, we will find the universe has more for us than we may think.

One of the things I’ve learned is that the relationship between the number one and number two is a very delicate one. There must be give and take from both sides. It’s like a mentorship, which a lot of people think only flows in one direction. But mentorship is a very fluid thing.

Special Events: For the number-ones among us, what are some of secrets your number-two will never tell you?

Matteucci: One secret that your number two will never tell you is that we challenge you because we believe in bettering what we already have, like how a diamond doesn’t come out of the earth perfectly polished—it needs abrasion. Part of that abrasion is being able to manage up and mentor your number one, but also being receptive as a number two to the mentorship that your number one is bringing you.

The other big secret is that you might have invented the next best thing since sliced bread, but that’s not your legacy. Your legacy is the team that you build, because that team is going to not only carry your vision through to fruition, but also carry it forward.

The greatest achievement is if you can build a team that thinks like you but challenges you and fights for you and pushes through for you in the most difficult times because every person working there shares the same ethos and values. It’s the “why” of what you do is what matters. And if the why is to create an amazing community that’s about legacy and about teaching and about developing and moving forward, then that’s the team that’s going to be a success.

Special Events: What have been some of the defining moments in your career so far? What did you learn from them about yourself, the work, and life?

Matteucci: I have learned so much from the challenges we face now due to COVID. For example, we’re all aware of how difficult the supply chain is now in special events and catering. I had an absolutely amazing family [client] who had been through the darkest days of COVID. They did everything to ensure that their guests would be safe, and they wanted it to be perfect for the bride and groom.

They really loved all those beautiful, delicate flower varieties from Holland, and we were ready to supply one of the most beautiful floral buys I’d ever seen. It was summer, and we brought a refrigerated truck to the venue to keep the flowers cool and safe. Then, as David and I were working, our head of production and our creative director approached us with ashen faces. The thermometer in the brand-new rental refrigerator truck had broken and all the flowers had frozen solid.

The wedding was the next day.

Without saying a word to each other, our team rallied. We emptied the truck, figured out what the loss was, and got on the phone with our purveyor to find whatever replacement flowers were to be found. Within 30 minutes we had ascertained the loss, and sourced replacements for 90% of the flowers that had died. By 6:00 p.m. we had the replacements. To this day, the client has no idea what happened.

And the other thing that I’ve learned is that as an industry, we are master problem solvers. And when you have a team that is led by someone who has developed each of them to their strengths and to their capacities, that team even in the face of disaster will solve the problem with no screaming, no drama, just calm professionals tackling the problem.

On the speaking side of my career, I recently did a gig where the audiovisual totally went out on me. As a former TEDx speaker, people expect me to arrive with the fire and when you have a glitch like that, it can be debilitating.

I pushed through that talk—I even got a standing ovation—but I walked off the stage so mad at myself because I couldn’t get past this desire for it to have been perfect.

After I retreated to my room and took a hot shower, I was able to look at it more holistically and recognize that everyone understands that tech glitches happen. One thing we talk about a lot in this COVID era is that everyone is entitled to grace—but we often forget to give a little grace to ourselves too.

And the other thing is that it was a perfect lesson in the fact that the universe conspires with you, not against you. That crowd wanted to be on my side. And when I showed up later at the evening party, so many people came up to me and said, “What you delivered hit home. You changed me.” I couldn’t see that because I was so wrapped up in my own head about it not being perfect. You will have adversaries and challenges, but it’s important to look for the people who advocate for you and who are on your team.

Special Events: What are you looking forward to in 2022?

Matteucci: Of course, Catersource + The Special Event in May! I cannot wait to get on that stage and light it up. When I spoke at TEDx Beacon Street, it was very steeped in technology due to its relationship to MIT and Harvard. There were all these people solving spinal injuries through nanotechnology and writing the code for NASA space missions, and here I am talking about life as a number-two and parties—it must have been a refreshing change of pace!

But what I’m so excited about with Catersource + The Special Event is to be back with my own people, telling stories for people who understand what’s on the line when the flowers freeze. I’m so excited to be delivering this talk because event professionals know there’s no Venn diagrams or data sampling when it comes to creating a successful event. It’s hard. It’s passion. It’s drive. And that’s what I’m most excited about.