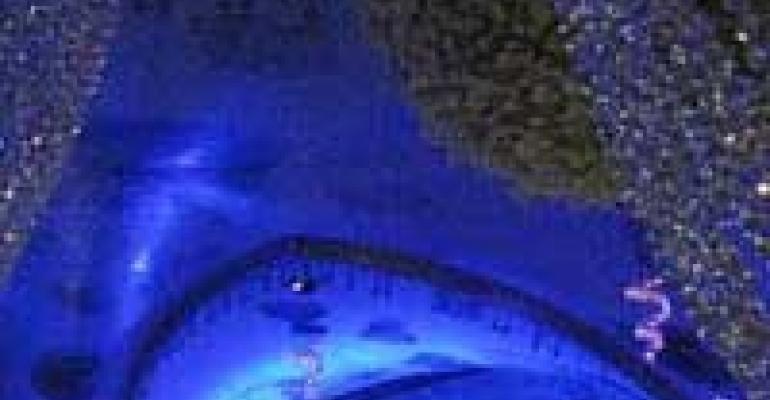 A TENT BLOOMS IN THE DESERT

client's request: To help 2,000 guests celebrate the recent wedding of her son last November, a Middle Eastern queen asked for a 70,000-square-foot, free-span "castle" in the shape of her favorite flower, the orchid.

The challenges: Tentnology had only 90 days to complete the structure, which involved working with a fabric manufacturer to formulate a special material that could stand up to the Middle Eastern weather, where daytime temperatures can hit 140 degrees Fahrenheit. Even though Tentnology has a five-acre test field at headquarters, the field was still too small to develop a full-size prototype. In response, Tentnology worked up a 25,000-square-foot "mini" version of the structure. To get the structure to the event site on time, the team packed it into a chartered 747 cargo carrier.

The triumphs: The structure—now available to the entire special event community—weighs about half as much as a traditional structure of the same size, and therefore is cheaper and less expensive to install, management says.

The solution: Regal Tent Productions of Stoney Creek, Ontario, developed a two-story structure with an interior, glass-walled L-shaped mezzanine overlooking the main level. So the tent wouldn't look like a tent, it sported four 50-by-8-foot screens on the top, masking the tent peaks.

The challenges: The square structure had to be shoehorned into 7,500-square-foot footprint, with tight restrictions on working hours. The tent team used two forklifts working in unison to install the mezzanine arches. "Assembling the façade was like creating the world's most insane jigsaw puzzle," Regal management says. "Each side of the façade had over 1,000 individual bolts, nuts and screws, 500 frame pieces, and had to be installed 25 feet in the air!"

The triumphs: Some 8,000 guests a day visited the pavilion, marveling at an oversize oval projection screen on the mezzanine. The insulated hard walls cut down on heating costs for the client, while the double-sided structure fabric eliminated the need for costly draping.

The client's request: Video-game company Nintendo asked for a sophisticated, traveling structure for its Wii Games Tour, a cross-country competition that kicked off in July in New Jersey and ended with the finals in California in September.

The solution: TentLogix of Stuart, Fla., devised a 30,000-plus-square-foot, temperature-controlled tent complex with elevated flooring systems, carpeting throughout, and a custom-engineered 6,000-square-foot, two-story balcony space with stairs and railings.

The challenges: To accommodate gamers and gaming consoles, the tent team developed a special structure featuring leg spacing every 16 feet; flooring on the second level had to be engineered to withstand load capacities of guests and gaming consoles and to provide forklift accessibility.
Each installation site brought its own challenges. The New Jersey site involved a sharply graded lawn with "major drainage issues," Premier management says, while the installation in earthquake-prone California required certifications for seismic activity.

The triumphs: The tent team organized and pre-installed much of the structure in its own warehouse beforehand, enabling installation of the tent, floor and balcony levels on-site in only four days. An average of 5,000 guests got their game on at each event. TentLogix was a winner, too: "This was a valuable project in regards to continuing the development of our staff in custom project applications," management says, "from the fabrication at our shop to the installation in the field."

Putting a new spin on the traditional cluster of single-sponsor hospitality tents, Hargrove and Proteus On-Demand Facilities developed a single hospitality space honoring Kentucky's equestrian heritage for the Alltech Federation Equestre Internationale World Equestrian Games, which ran Sept. 25 though Oct. 10 in Lexington, Ky. The Olympics of equestrian sports, the 2010 games attracted half a million visitors, the first time the event has taken place in the U.S.
Making its mark, the Makers Mark Bourbon Village hospitality tent was a 26,000-square-foot structure featuring a back wall made entirely of glass panels with a clear PVC gable sail to let natural light flood in. Austell, Ga.-based Proteus erected the tent—which accommodated 1,200 guests at time—in seven days.
Lanham, Md.-based Hargrove stepped in to complete the interior, which featured custom bars, an innovative interactive buffet area, high-end shopping, fine dining and concierge service. The focal point was the Bourbon Bar, featuring rich wood and whiskey-colored tones, textures including copper and metallic finishes, and a soaring canopy with designs meant to visually represent the swirls of bourbon in a glass. The result: a venue worth a toast.