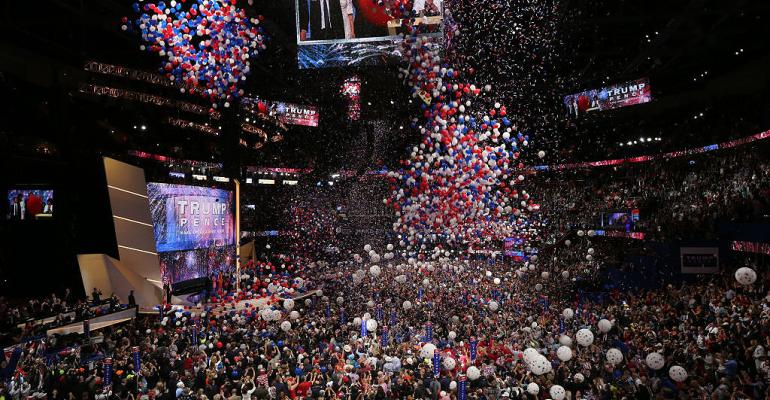 Photo by Mark Reinstein/Corbis via Getty Images
Balloon drop at the conclusion of the Republican National Convention at the Quicken Loans Arena, Cleveland, Ohio, July 21, 2016.
Venues

Which city will win the Republican National Convention in August? No one knows yet.

Florida Governor Ron DeSantis told Fox News today that his state can host the Republican National Convention Aug. 24-27. The event had been slated for Charlotte, N.C., but President Donald Trump said on Tuesday that he would move it because North Carolina Governor Roy Cooper has not guaranteed his state will allow a packed stadium in the wake of the COVID crisis.

“The shape of the epidemic is just simply going to be different, and hopefully it's a lot better, but I think we'll be able to make those decisions about what precautions need to be taken as you get closer," DeSantis said in today’s interview. "But to just rule out a convention at this stage, I think, is a mistake so we've said we want to get to 'yes' on it and I think we'll be able to do it.”

BIG BENEFITS In the works for nearly two years, the Charlotte convention was at one time expected to draw 50,000 people to the city and generate more than $150 million in economic benefits.

Baker said he’s talking to GOP and convention officials today. “We need to hear from the RNC in very plain terms what their expectations are as it relates to fulfilling their obligations under the contract,” he said.

TWO CITIES? What could happen is a two-city convention, with procedural work in one location and splashy TV-oriented events--such as the nomination acceptance speeches—in another.

In a conference call Wednesday night, the RNC’s executive committee voted to continue talks with Charlotte even while looking at other cities. “The RNC’s Executive Committee has voted unanimously to allow the official business of the national convention to continue in Charlotte,” said RNC communications director Michael Ahrens. “Many other cities are eager to host the president’s acceptance of the nomination, and we are currently in talks with several of them to host that celebration.”

RNC officials say they are looking at other cities, including Dallas, Jacksonville, Fla., Nashville, Tenn., New Orleans and Phoenix.