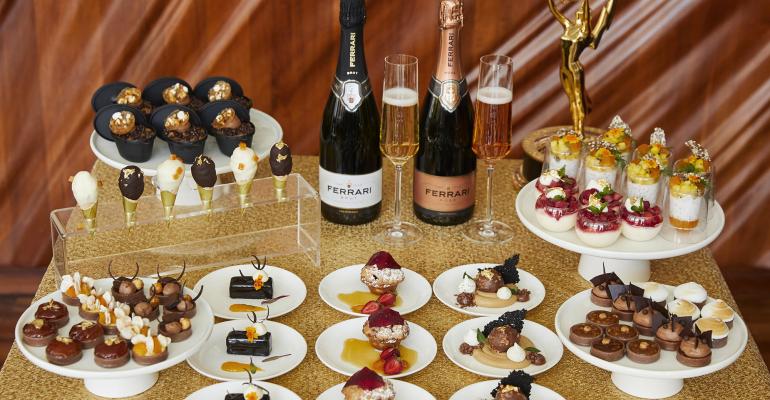 Photo by Matt Sayles/Invision for the Television Academy
Venues

The annual event will get a fresh new look in September, moving to the L.A. Live Event Deck.

Planners behind the 2018 Emmy Awards will shake up the Governors Ball that follows the Sept. 17 event, according to the Hollywood Reporter. Not only will the gala move from the L.A. Convention Center to the alfresco L.A. Live Event Deck, but the seated dinner will be swapped out for an array of dining stations offering small plates:

There's a big change happening on one of Hollywood's major awards nights. Nope, not the "popular" Oscar. Rather, it's the Television Academy taking a gamble on L.A.'s weather by moving its Governors Ball — following the 70th Primetime Emmys on Sept. 17 at Microsoft Theater — from the L.A. Convention Center to a partially tented outdoor space atop L.A. Live next door. Easily accessible by stairs or elevators, the L.A. Live Event Deck space (which will also host Creative Arts balls Sept. 8 and Sept. 9) won't offer the seated dinner of past years but instead will be designed as an "interactive, mix-and-mingle format" allowing guests to move through interior and outdoor spaces, says Cheryl Cecchetto, who has produced the balls with her Sequoia Productions team for 21 years.

Guests will be directed not to tables but rather to one of 11 numbered areas, each with its own staff and beverage and food stations (featuring increased vegan options from returning chef Joachim Splichal and Patina Catering). But no worries about getting trapped in a C-list zone; partiers are encouraged to wander and explore. Cecchetto says the tented space should feel “synergistic” with the “inside and outside feeling as one space.” The new layout will also feature an open area surrounding the “Winner’s Circle” where Emmy winners will be able to get their trophies engraved … The Hollywood Reporter