View Our Webinars!
Featured
What Pandemic Shifts are Here to Stay in the Wedding Industry?
Dec 06, 2021
Taking on the 2022 Trends
Jan 28, 2022
Breaking Free from the Plateau in Your Business
Nov 23, 2022
AV Concepts Every Planner Should Know
Nov 22, 2022
Special Events Blog
brought to you by
Venues

As Seen In Los Angeles 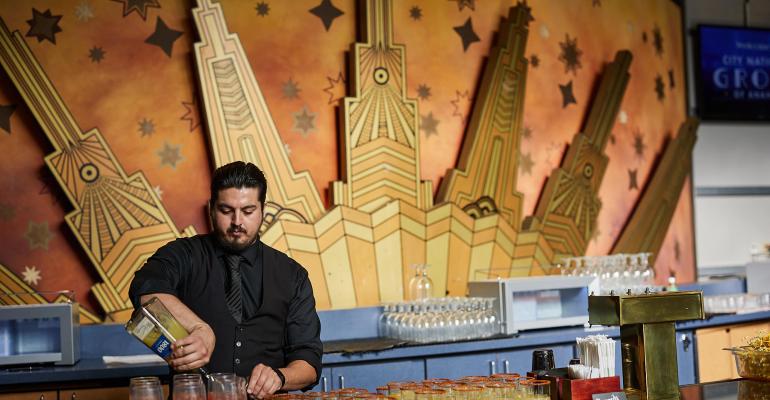 On May 2, three coach buses filled with event planners and caterers toured around Los Angeles and Anaheim to view some of the most iconic venues in the area. There were three must-see stops: Shrine Auditorium, SoFi Stadium, and City National Grove of Anaheim. Each of these venues shines in their own unique way, from hosting award shows, to renting out exclusive club rooms, to catering toward each audience type that comes through the doors. Here are the highlights of what we saw.

Between the spacious promenade, legendary auditorium, historic expo hall, and cobblestone and palm-lined Royal Street, Shrine Auditorium offers a variety of areas for events to thrive. Originally built in 1906 (and rebuilt after a fire in 1926), the Shrine has been featured in several renowned films, including King Kong and both versions of A Star is Born. The auditorium also has hosted several award shows—Academies, Oscars, and Grammys—and many rock concerts. The 10,000 sq. ft. stage adjusts to create more seating as necessary, accommodating up to 6,300 people. The 54,000 sq. ft. Expo Hall can be divided into several parts and is used for anything from banquets to after parties. And right outside, the cobblestone street gets blocked off for red carpets and outdoor seating. Catering is provided by Wolfgang Puck Catering, and the kitchen can be built out in the outdoor area to expand catering abilities. Whether you’re planning a small meeting or a massive celebration, Shrine Auditorium is an excellent venue option.

Home field for the LA Chargers and the LA Rams, SoFi Stadium is so much more than a football field. There are 35 rentable rooms, including terrace and patio suites, and if you’re really going for the wow-factor in your event, you can even rent out the field itself. Each of the patio suites, like the Toyota Patio, is themed for a different part of California, using plants and décor that highlight the natural ecology of that part. With the variety of spaces available, SoFi Stadium is great for small cocktail parties or major celebrations—in fact, rapper Drake rented out the entire stadium to celebrate his Artist of the Decade Award.

Walking into the roomy lobby of City National Grove, your eyes will be greeted by a bold pop of orange and gold artwork behind a black granite bar top. The venue accommodates between 50 and 4,000 people, with themed spaces like the landscaped Palm Terrace courtyard and art-deco Hollywood-inspired Gallery. Then there is the theater area itself, which holds 1,800 people in standing general admission style. A thoughtful bonus? Chef Thomas Ramirez caters toward each event that is held, researching and creating Korean food for a K-pop concert, for instance, or wiping down the entire kitchen for a crowd with gluten-free members. Between the artistic space and personalization of the menu, City National Grove is a venue to look into for your next LA event.