A Unique Candlelight Concert in the Middle of the Desert 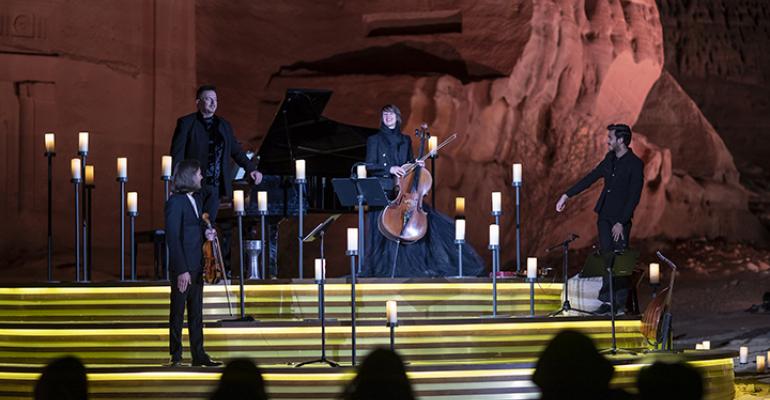 A recent Candlelight Concert was set in the archaeological site of Hegra (AlUla, Saudi Arabia), the UNESCO World Heritage Site famous for having more than 100 monumental tombs carved from rock formations.

The archaeological site, just 22 minutes outside the city of AlUla, has never been used for concerts of such intimate character.

The live audience enjoyed the evocative repertoire performed live by the Stefan Lombard ensemble (piano, violin, cello and oud). The famous South African musical Director has created a suite (a collection of short musical pieces) from classic compositions to contemporary, Arab, movie soundtracks and a revised take on pop music.

More than 500 high-tech candles surrounded the musical performances; sculpted by hand, they allow spectacular graphic patterns that emotionally enhance the special moments by blending harmoniously with the forms of the archaeological site, creating a landmark that merges the suggestions of the past and the dynamic of the contemporary. The candles offer various control possibilities: they can shine all night, cozily shaping the surrounding and could reach four times the brightness of a traditional candle without burning or melting. The unique color combination allows for the same warmth as a real flame candle. In addition, its innovative algorithm can make an entire set of candles flicker differently, just like real candles would.

These two special events are exclusive occasions within the AlUla Moments Season, specifically designed for ‘Winter At Tantora’. The whole season is filled with high-end cultural, musical, wellness and arts events, as well as star-studded concerts, adventurous activities and immersive heritage experiences. BWS-KSA, the branch of the Balich Wonder Studio group based in Saudi Arabia, has been appointed by the Royal Commission for AlUla to produce multiple activities throughout the entire season.