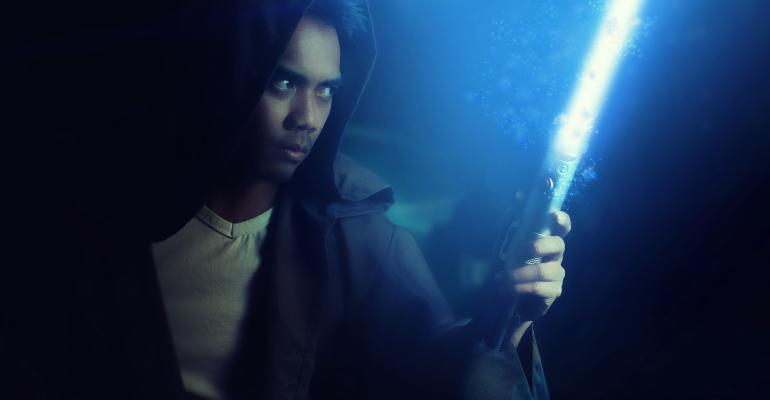 Demand is so high for Darth Vader and the rest to appear in weddings, demand is outstripping supply.

The flowers, the rings, the lightsabers. Couples obsessed with the blockbuster franchise “Star Wars” are so eager to have Darth Vader, stormtroopers and other iconic characters appear at their weddings that demand is now outstripping supply, says the Wall Street Journal:

Darth Vader, the Dark Lord of the Star Wars universe, and his entourage of armored stormtroopers are crushing rebellions—and hearts. Since Walt Disney Co. bought Lucasfilm Ltd. for $4 billion in 2012, demand for Vaders, stormtroopers and other Star Wars characters at weddings has grown so much, there’s now a shortage. Some desperate couples are wooing local superfans dressed as Vaders and stormtroopers by donating to their favorite charities; others turn to the Dark Side: wrangling characters outside official channels.

Many of the Star Wars wedding duties fall to members of the 501st Legion, a group of more than 13,000 fans in about 60 countries that often dress as bad guys including stormtroopers, Imperial gunners and Darth Vader himself. The members, who are divided into more than 100 regional groups known as “garrisons,” create their own props and costumes in exacting detail and service local events at no fee … Wall Street Journal