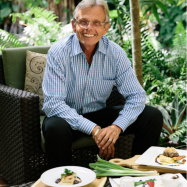 Bill Hansen, a 55-year catering veteran, is widely recognized as a giant in the catering industry. Creative thinking, innovation, and good old-fashioned hard work have made Bill a leader in every facet of the profession. He caters, coordinates, trains, teaches, mentors, motivates, manages, and writes.

Bill began his catering career in the mid-1960s while attending the renowned School of Hotel Management at Cornell University. The young entrepreneur sold sandwiches, snacks, soda, and beer to pay for his tuition and board. He graduated with a Bachelor of Science degree in Hotel Administration in 1967. Bill’s military service as an officer included managing high-end Officers’ Clubs and Quarters at the Naval Postgraduate School in Monterey, California. Bill moved to South Florida in 1975 and started his own catering business (Bill’s Catering) in 1980 while he was also managing The Miami Club, Miami’s most prestigious luncheon club. Bill Hansen Catering, a luxury catering company, quickly became the standard by which all upscale South Florida caterers are measured.

The Last Word: Company culture eats profit for breakfast
Jan 26, 2021
After 40 years as the CEO of my own catering and events firm, I’ve had great company culture…and lousy culture too. It’s never an easy road.