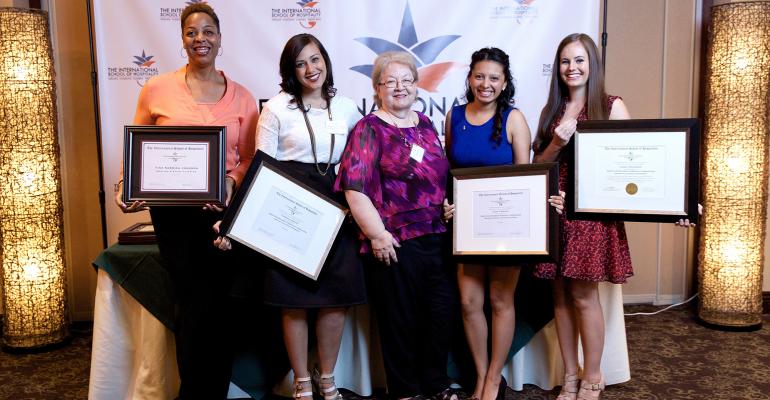 Known for her career educating industry leaders and her disarming candor, the late Patti Shock is saluted by the event profession.

Longtime industry leader Patti Shock, credited with establishing meetings and events as an academic track on the college level, died on Nov. 22. A celebration of her life will be held Dec. 9 at the International School of Hospitality in Las Vegas.

An educator, speaker, consultant and author, she spent 28 years as a professor at the University of Nevada Las Vegas, including chairing the tourism and convention administration department. In 2006, she joined TISOH as an academic consultant. She also pioneered online courses for Florida International University and Kennesaw State University.

HOSPITALTY BACKGROUND Shock grew up working in her family's Italian restaurant in Oakland, Calif. She credited her mother as her role model: “She was a restaurant owner back in the 1950s when female-owned businesses were rare,” Shock told Special Events in 2016. “Having a professional woman as a mother greatly influenced me and made me aware that I could have a career, regardless of my gender."

The restaurant business also gave her skills she used throughout her lifetime: "While most people look down on food servers, I learned many skills as a waitress that I use to this day: how to initiate a conversation, how to prioritize on the fly, how to be tactful--and how to schmooze the guest to get that tip.”

Although Shock initially wanted to be "the first female general manager of a Hyatt Regency hotel," she then “realized that I would spend my life looking at balance sheets and P&L statements," she says. "I changed my mind."

Turning to education, her first job out of college was teaching in the hotel, restaurant and travel administration department at Georgia State University in Atlanta. The event and meetings industry piqued her interest, and it struck her that higher education in the field simply didn't exist. Upon becoming department chair, she started adding classes—one by one—over the course of her 10 years there.

The dean of UNLV took note and recruited her to create a meeting and events program. She became chair of UNLV's new Department of Tourism and Convention Administration, retiring from that role in 2003. She then joined the faculty at TISOH.

She described her legacy as her influence: "I love knowing that I have made a difference in the lives of so many people, both students and industry professionals I have mentored over the years."

TOUGH TEACHER “One of my earliest memories of Patti was during my time at UNLV as a student. She was a tough-as-nails professor, I remember being so intimated by her and actually tried to get out of taking her class. I never had the guts to tell her that story. Flash forward a few decades when Patti would introduce me to someone new, she would always say, ‘Michele was one of my students.’ I was always so proud of this and I think she was as well. Patti was such an inspiration, always encouraging those around to do more and get after it.”   —Michele Polci

EVENT ROYALTY “Patti was an idol of mine. She was an educator in hospitality but, more importantly, she walked the walk--being about the work and learning the lessons from each event rather than the glitz and glamour of an attendee list. She was always so calm and collected and always had the right answer for any planner in Las Vegas. She was so unassuming and down to earth. She is and always will be event royalty in Las Vegas. I will miss her.” —Suzi Waltos, CSEP, CPCE, director of events and engagement, Las Vegas Metro Chamber of Commerce

“Patti Shock did so much for NACE. From being an integral part of the CPCE certificate, to being one of the founders of the Las Vegas Chapter of NACE, to participating in all the educational endeavors, to being the first legacy donor for the Foundation of NACE, Patti embodied NACE. To me, she was my most important mentor. She was my guide in the world of hospitality, and supported me as I grew within NACE and as an academic in our field. I consider myself one of her sons--one of those who will carry her spirit of love, care and mentorship wherever I go.” —Donnell G. Bayot, Ph.D., CHE, CPCE, CFBE, director of academic affairs, TISOH

TRUE EDUCATOR “Patti was an educator in every sense of the word. But her work was not just about imparting knowledge, though she did that well in all of her textbooks. Indeed, those books are the very foundation for catering education. No, Patti’s work was much more about building careers and about teaching others to connect and network. Patti knew so many people, and she opened up her Rolodex to everyone, from students to industry professionals. Her knowledge and ability to connect with and among people built the academic infrastructure at numerous schools. I know because she was instrumental in the formative years of TISOH. Patti did all this with love and care. She took so many of us under her wing. She made so many of us who we are today.” —Timothy M. Lam, executive director, TISOH

ROCK CHICK “I met Patti after joining the event industry through the late Dr. Kathy Nelson during my ISES (ILEA) days. From our first meeting, Patti was incredibly welcoming and supportive, and we clicked over our mutual ethnic background and of course a love of Italian food. I was fortunate to know her both personally and professionally, yet she continued to surprise me. When I had the privilege to produce her induction into the EIC Hall of Leaders, she threw me for a loop during the planning. After conceptualizing in my mind what the gala awards ceremony would look and sound like, Plan A, she tossed me a curveball like none other. When asking about her favorite band so I could incorporate and stylize the music for the function, she proclaimed, ‘I’m the original rock chic--Lynyrd Skynyrd all the way!' Needless to say, Plan B was put in place and brought a total rock concert feeling to the event--still to this day one of my all-time favorite projects.

“What she taught me as a planner was invaluable: Don’t take the obvious route, dig deeper and uncover the real drivers for your stakeholders. No matter how skillful a teacher she was … no matter how patient and how kind she was with students … no matter how engaging she was socially ... or how outspoken she was about this industry ... above all else, she was a lover of life and a shining example that no matter where you are in your personal journey, you are the catalyst for your own change. She proved this time and again through her own life choices; her later in life education; her UNLV career path; her post-retirement commitment to TISOH; her continued industry speaking, writing, webcasting, blogging and tweeting. She never let anything interfere with her life’s work, which was a commitment to our industry through education on all levels. She did that by engaging with others and developing meaningful friendships. I’m one of the lucky ones since I had her in my own Las Vegas backyard, and I’ll find solace knowing she’s left an indelible mark and a legacy of life lessons for me, for generations and for our industry. RIP, my friend.” —Lenny Talarico, CSEP, CHE, director of corporate sales, Blueprint Studios, Las Vegas

USE YOUR VOICE “I’ll never forget the day in March 1999 when Patti called and said she wants to meet with me! Yikes--I was thrilled and nervous. During this two-hour lunch, Patti said three things that have stayed with me for 20 years:
1. You have a voice--use it to make the hospitality business stronger.
2. Not everyone thinks the same way you do.
3. Continue to learn from the people around you.
I'm not sure Patti realized it but I truly looked to her as a mentor! Thank you, Patti, for that day and many, many days after. The industry lost one of its greats!” —Meryl Snow, senior consultant, SnowStorm Solutions, Philadelphia

KNOW YOUR NAPERY “The story that always makes me smile the most is when I was studying for the CPCE test to become a Certified Professionals in Catering and Events. I believe Patti wrote a lot of the test, and I know we had to read a number of her textbooks in preparation for the exam. I was the first time I was introduced to the word ‘napery,’ aka to the rest of us as napkins or table linens. There was not a meal that went by with Patti that we did not bring up it up; ‘I just dropped my napery on the floor; I need another.’ She would roll her eyes, remind us of the origin of the word, but I knew she got a kick out of it. Patti = Icon, legend, friend, mentor and motivator. You will be missed, my friend. ”  —Michele Polci

A BLESSING “Patti Shock will be remembered for all her contributions to the field of hospitality education, the content of that education, and for her mentoring of students taught over a career that continued after she 'officially' retired, and through her work with TISOH. What may be lost in all that is recounted about Patti professionally is the human being of great depth and humor, wit and caring. Having known Patti for what seems like forever but must be about 35 years, I remember the first time we spent time together, just us, at a PCMA meeting many years ago. Oh was I in awe--and though not much younger than she, this industry icon even then would take an interest in me. We were both late bloomers in the formal areas of this industry, and maybe that's some of what drew us together.

“I understand from those who had the privilege of spending time at the hospital with Patti (who had gone in for a simple procedure that, it seems, went terribly wrong), including her dearest friend, David, that they, to help themselves through the passing time, told ‘Patti stories.’ How I wish I'd been there to hear and to share. I smile and laugh and cry as I remember some that are funny (the facial that she had at a retreat and Patti without makeup willing to face a roomful of peers!) and sad (that, at a similar retreat, she expressed didn't think she'd live 'that' long.) Or the conversations we had about aging and how to remain relevant.

“That she did-—remain relevant--and should still be with us to help educate more educators and more students in hospitality to go forth and make this industry the stellar one she helped create.

“In Judaism, after someone dies, we say, ‘May their memory be only for a blessing.’ I wish that for Patti Shock, my friend, whose death has left a giant hole in my heart and soul.” —Joan Eisenstodt, Eisenstodt Associates, Washington