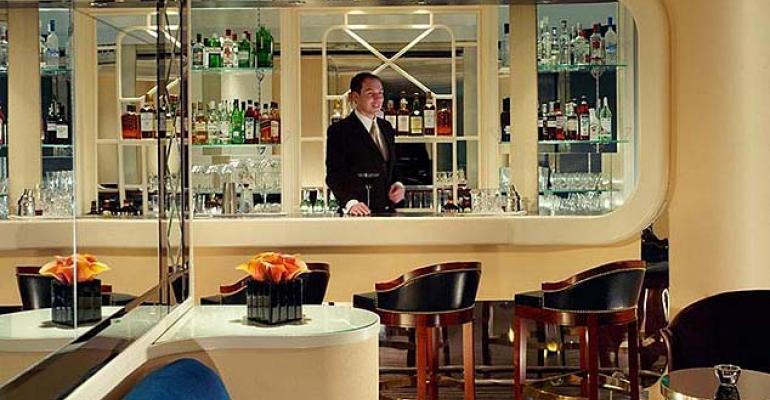 <p> The American Bar at Fairmont&#39;s The Savoy Hotel in London, which will serve the Great Goodwood Punch this summer.</p>
Catering

Fairmont Hotels releases its take on cocktail trends for summer 2013, which include punches, aperitifs, quality ice and custom infusions.

Fairmont Hotels & Resorts, the Toronto-based group of more than 65 luxury properties around the globe, has released its take on cocktail trends this year. Fairmont bars have created some famous cocktails, including the White Lady, developed at London’s The Savoy, and the Mai Tai, from the Fairmont San Francisco’s Tonga Room.

What’s the latest to tempt patron’s taste buds? Fairmont steps behind the bar to take a look:

Pleased as Punch –Punches, tried and true seasonal favorites, are once again topping the cool trends charts. At Fairmont Makati in Manila, guests can order the newly created Pacquiao Punch, named in honor of legendary Filipino boxer Manny Pacquiao, which blends local Don Papa rum and Cointreau with fresh pineapple, pink guava and grapefruit juices. “Fresh blended fruit mixes are great as they can be can married with almost any spirit from bourbon to rum to tequila," says Joern Schwaiger, the hotel’s food and beverage director. "Plus, they’re ideal for special events or small groups.” Served with an ice bucket and ladle, the tableside punch is finished off with grated cinnamon. This summer,The Savoy and its award-winning barman, Eric Lorincz, will also be punching things up at Glorious Goodwood horseracing events. Available on the American Bar’s menu and a special Fairmont pop-up bar at the event, the Great Goodwood Punch features lemon, rhubarb and apple juices, London Dry gin, elderflower liqueur and simple syrup.

Drink Your Veggies- Staying fit and living healthy is as popular as ever, so it’s no surprise that this trend has trickled down to the cocktail world. This means many bars and lounges are serving up drink concoctions that are low in fat, cholesterol-free, have few calories or are rich in vitamins. Case in point: The Fairmont Chicago’s Green Goose Cocktail, which features a trio of super foods--kale, celery and Granny Smith apples. The juiced greens are mixed with Grey Goose, fresh lime juice, Chartreuse, and simple syrup for a drink full of flavor and nutrients. Also featuring cucumber, along with fresh cilantro and chili pepper from its rooftop herb garden is the Stanley Park Margarita at the Fairmont Waterfront, Vancouver, British Columbia. Lime juice, tequila and agave syrup round out this seasonal favorite. A colorful and tasty choice at The Fairmont Kea Lani, Maui, Hawaii, is the resort’s new Maui Beet Bellini, which features locally sourced beet juice, chilled Prosecco, maple syrup, a touch of cinnamon and a dash of cayenne pepper.

Modern Family - Every classic cocktail has to start somewhere, which is why Fairmont has recently debuted a new Modern Classics menu. The new drinks, which feature both heritage and contemporary influences, were handpicked by a team of experts from over 80 entries submitted by Fairmont bartenders from around the globe. Among the 14 new globe-spanning "Modern Classics" is a spin on the time-honored margarita--the Acapulco Margarita--a tangy blend of Patron Silver Tequila, lime and an unexpected dash of mint; an extra spicy Canadian favorite, the Triple-Pepper Caesar, which features piquant chipotle and cayenne peppers; a fruity variation on a British classic in the Bombay Sapphire-based Kiwi Sapphire; and the wholly original Chinese Five-Spice Fizz, made with Rémy-Martin VSOP cognac and re-imagined with a zesty ginger and singular five-spice finish.

Proven Infusions- At Fairmont Pittsburgh, house-made simple syrups are the stars of the show. “Infused simple syrups, which are packed full of flavor and can be prepared ahead of time, give us a lot of flexibility behind the bar,” said Jennifer Gelormino, manager at Andys bar. “They add to our efficiency, without sacrificing on creativity.” A few favorites include the hotel’s homemade ginger simple syrup, featured in its Moscow Mule, and lavender simple syrup, which is used in one of the bar’s martinis. Vodka is the spirit of choice in Ukraine, and Fairmont Grand Hotel Kyiv serves up a number of house-infused varieties from the Hrenovuha, which features hints of horseradish, honey and vodka, to the Spotikach, which is infused with cherries, cinnamon and honey. Several Fairmonts, including Fairmont San Francisco, are crafting a house-infused spiced vermouth with orange zest, cloves, cranberries, allspice and fresh ginger to take the traditional Manhattan or Negroni up a notch.

Aperitifs Anew- Aperitifs, wildly popular throughout periods in the 19th and 20th centuries, are arriving in grand style at Fairmont once again.  Perfect as a pre-meal sip or for those who wish not to overindulge, aperitifs are a great way to kickstart any dining experience and have been shown to help stimulate appetite.  At the uber-luxe Fairmont Pacific Rim in Vancouver, the hotel has just added the Céder (French for "indulge" or "to give in") to its summer cocktail list.  This low-octane libation is put together with 30 ml of Lillet Blanc, 15 ml of Giffard Creme de Peche, three dashes of house-made orange bitters, and 60 ml of sparkling mineral water and is finished off with an orange peel garnish.

Spirited Sommeliers- For some, learning about the art of the cocktail is just as important as downing a new drink. Enter Fairmont’s spirits specialists. The Fairmont Scottsdale Princess in Scottsdale, Ariz., has threes on hand. Beer expert Jessica Evans advises guests on beers of the world, tequila master Abeer Besharieh shares tips on the resort’s more than 130 tequila varieties, and Chad Elsner serves as sommelier and craft mixologist at Bourbon Steak.

Ice, Ice, Baby– This once overlooked cocktail element is now one of the more important parts of a drink. “One big solid ice cube or a chiseled ice ball is much better for spirit-forward drinks like an Old Fashioned, as opposed to crushed ice, which is better for juleps, swizzles or mojitos,” says Kathy Casey, Fairmont’s mixology consultant and President of Kathy Casey Liquid Kitchen.  “Adding a flavor element to ice, such as with bitters, is also becoming quite popular. As the flavored ice melts in your drink, it adds another level of flavor and continues to enhance the drink as it’s consumed.”