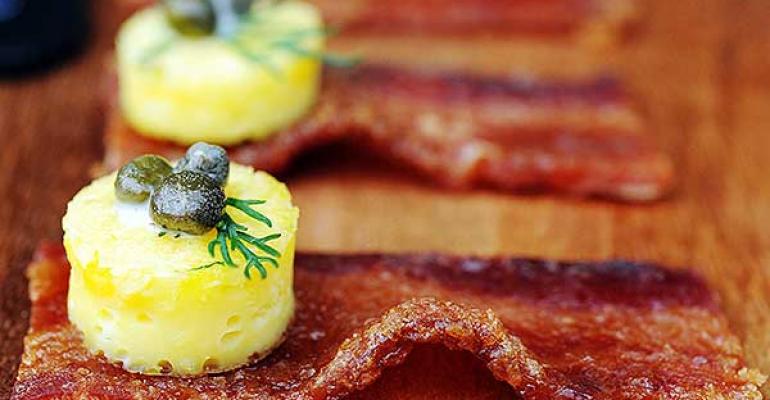 What will be on course for special event menus in 2015? These top caterers share three top trends for each course. 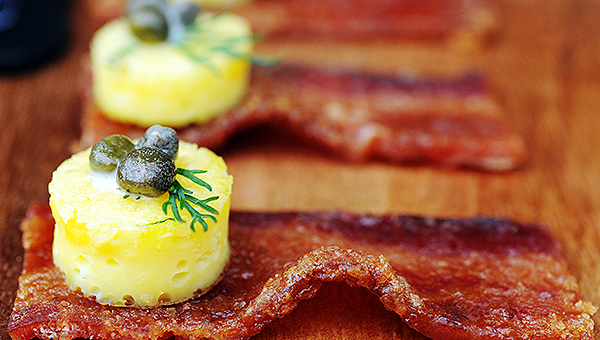 2. Bacon and eggs Moving away from the dessert table (finally), bacon remains the go-to ingredient in many appetizers, such as Early’s popular bacon spoons, mini candied bacon BLTs, and bacon-wrapped chicken breast bites marinated in Korean sauce. (In photo above; photo by Erin Hession.) However, bacon's counterpart--the egg—is perfectly poised for the hors d’oeuvre platter, Edwards says, albeit in more refined preparations. “Old-style elegance is making a comeback by way of the egg,” says Edwards, who offers quail eggs topped with American osetra caviar, toast points topped with house-made smoked salmon and sauce gribiche, and cherry tomatoes filled with egg soufflé among his egg-based bites. 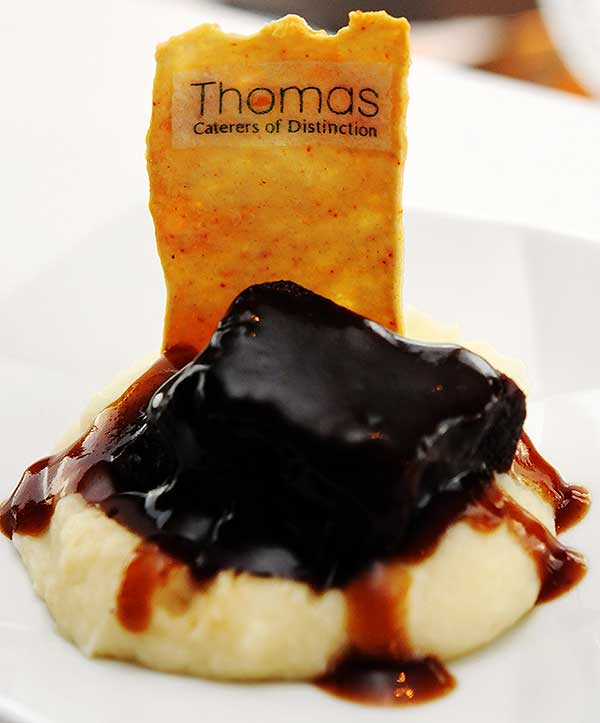 1. Light and healthy The demand for lighter, healthier, big flavor fare will continue to rise in 2015, says Edwards, who sees fish and vegetables taking over the center of the plate. “Fresh fish is in such high demand, to the point where some menus are completely seafood-based,” he says. “That’s a huge change from the old days.” Edwards coaxes out big flavors through braising vegetables with herb sauces, often made with fresh stocks and pureed vegetables in lieu of thickening agents such as a roux. “Less cream and butter throughout, but still some at the end for flavor,” he adds.

2. Unparalleled proteins “Sustainable seafood is here to stay,” says Mooney, whose roasted branzino with preserved lemon jus is his fish dish of choice. Riznyk adds tilefish and cobia to the list, adding that overall, traditional proteins--such as filet mignon, chicken, salmon and tuna--will be replaced by nontraditional options such as rib-eye cap steak, bison, sweetbreads, goat and game birds. “Roasted, organic, high-quality meats but with lighter, cleaner sauces will continue to be in demand,” adds Mooney, citing grass-fed beef tenderloin with a five-herb green sauce as example. “We also make a bone-in organic chicken breast crusted with crushed fennel, mustard seeds and Parmesan-panko that is perhaps our most often-requested dish by our regular clients.”

Edwards throws legumes into the mix, and predicts a rise in beans—cranberry, runner, adzuki, black and garbanzo—as protein-packed, meatless main dish options. Mooney adds, “Legumes have to become hot one of these years, so why not 2015?”

3. Great garnishes Whether fried parsnip or carrot wisps, crispy matchstick potatoes, or a frizz of superfine fried onion, a cleverly prepared and tasty garnish goes a long way in boosting the flavor profile of a dish. Early and her team have found that great garnishes add that surprise element to the plate at little or no cost—a concept which has recently expanded to include what Early and her team call "accents." “When the economy was down, people could not afford a traditional double entree of, say, beef and seafood,” she says. “To give our clients the variety that they wanted at a more economical price, we started adding ‘accents’ to our plates. For example, we would add a small skewer of beef, shrimp or scallops to a chicken entree. The idea has become so popular that we now use it as an upselling tool.” (Above, braised short ribs from Thomas Caterers of Distinction; photo by Erin Hession.) 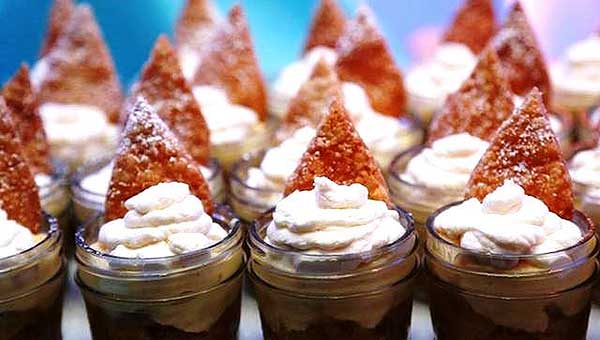 1. Small and sweet The desire for a little bit (or rather, bite) of everything is still par for the course when it comes to desserts. “A small portion with big flavor is key,” says Edwards, who favors chocolate truffles with sea salt, house-made caramels and shot glasses filled with trifle as standouts for 2015. “No more cake slices,” he asserts, predicting instead a rise in pies of all varieties.

Early adds miniature versions of traditional desserts such as lemon bars topped with whipped cream and rose crystals, and brownies topped with chocolate mousse and mint crystals as favorites with staying power. On the other hand, cupcakes and cake pops are on the way out, she says. Early predicts that mini "nitro pops" made on an anti-griddle in a variety of flavor combinations (Frangelico-peanut butter and Chambord raspberry, caramel and apple, chocolate and strawberry) will be big hits for spring and summer.

Riznyk sees miniature eclairs replacing macarons, which, he says, have seen their day on the dessert table. He also predicts a rise in heirloom baking ingredients. “There will be a stronger emphasis on local and heirloom foods, and heirloom flour, specifically, will become more popular,” he says. “Instead of the tired old carrot cake, include unique heirloom root vegetables into your cakes and desserts.”

2. Put up pies Mini Mason jars have become—and will continue to be—the mode of service for deconstructed pies, cobblers and trifle, according to both Early and Mooney. “The bucolic look is in, especially in our part of the country,” says Early, “and these desserts fit in perfectly with the rustic elegance theme.” Mooney adds, “These are honest, uncomplicated desserts that your mama was supposed to make--but in my case never did!” (Photo above, deconstructed apple pie in a jar from Kensington Caterers; photo courtesy Kensington Caterers.)

The full story is available only to subscribers to Special Events magazine. Not a subscriber? We can fix that; just click here.