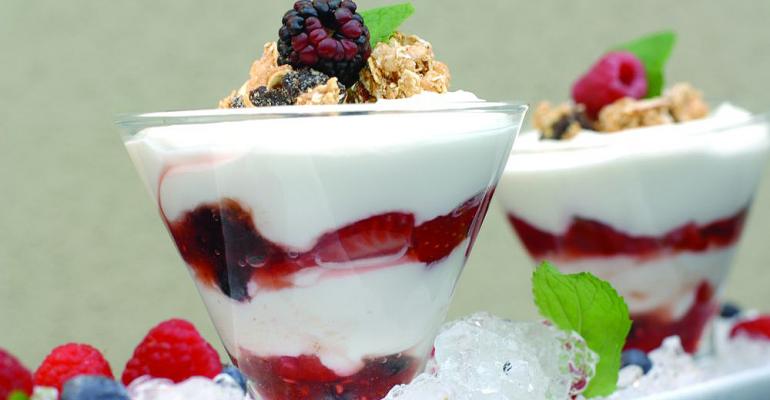 At the Kids Table: Best Menus for Children's, Teen Events

Either kids are becoming more grown up or adults are getting more in tune with their inner child--whatever the case may be, menus are merging at children’s parties.

Either kids are becoming more grown up (likely) or adults are getting more in tune with their inner child (also likely), whatever the case may be, menus are merging at children’s parties.

WHAT GENERATION GAP? When it comes to catering parties for children, especially teens, creating two separate menus is almost becoming a thing of the past.

“We often try to serve the same menu to both, as children are much more sophisticated these days than in the past,” says John Crisafulli, president of San Diego-based Behind the Scenes Catering and Events. “Chicken fingers and mac and cheese aren’t going to cut it anymore. Kids are looking for more creative options.”

More often than not, his teen clientele requests chef-inspired versions of classic kid foods, such as lobster or truffle mac and cheese, along with the caterer’s signature “pizza in a jar”— Mason jars filled with a variety of sauces and cheeses and served with pizza dough bread sticks. “It’s basically a deconstructed pizza slice,” Crisafulli says. A “hummus garden” planted with mini vegetables on a bed of wheatgrass served with veggie flatbread and an heirloom tomato gazpacho appeases vegetarian teens and adults alike.

PLAYFUL PRESENTATION Small-plate and action stations provide ideal vehicles for allowing children and adults to sample a variety of foods and cuisines without necessarily differentiating the menus.

“We are seeing an increase in small plate stations as opposed to buffets for teen parties,” says Teri Schenkel of Palo Alto, Calif.-based Catered Too. “We combine some comfort food favorites--such as gourmet slider stations and deep-fried tater tot bars--with more sophisticated fare, such as vegetarian zucchini Bolognese and a Moroccan tagine with couscous. By doing this, there’s something for everyone.” And she says an expert observation: “The truth is, we see more adults hitting up the kids’ stations.”

Baldwin and her team also like the food truck concept, and find that a gourmet grilled cheese sandwich (especially when paired with fig jam) has a broad-reaching demographic indeed.

NUTS FOR DOUGHNUTS There’s no denying that kids love dessert. In fact, it’s probably the most important food element of any children’s party. And one sweet treat that everyone can agree on is the doughnut.

“Craft doughnuts are still hot,” says Baldwin, noting an increase in requests for doughnut walls and doughnut-frying action stations. At Behind the Scenes Catering, Crisafulli and his team use custom-made portable peg walls with chalkboard backs to hang both doughnuts and soft pretzels. Tabletop versions are ideal for smaller events. Their stuffed churro bar, featuring fillings such as Nutella, cream cheese and dulce de leche, gives Mexican flair to the doughnut trend ...

See the full story in the Summer issue of Special Events. Not a subscriber? We can fix that--just click here.