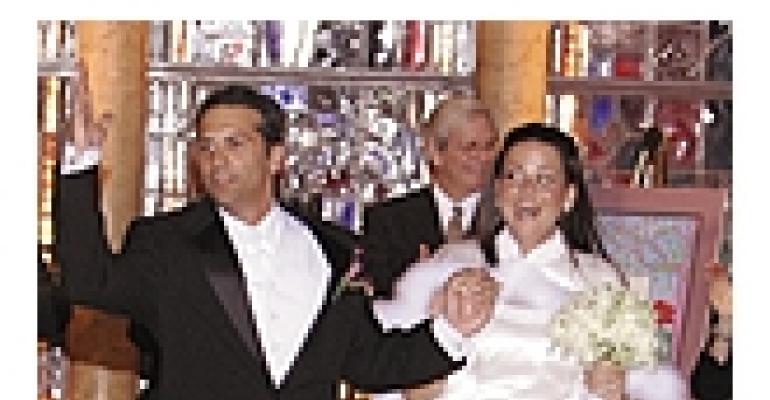 CHICAGO-BASED EVENT planner Audrey Gordon has been working on special events for nearly 25 years. But when it came time for the event of a lifetime — the wedding of her only daughter — Gordon turned to an event professional to create a spectacular wedding.

In a remarkable collaboration of colleagues and friends, event pros from throughout the U.S. shared their time and talents to create a New Year's Day wedding for Roni Gordon and fiancé Steve Nanini.

The outspoken mother of the bride freely admits she “prayed” for the day that the high school sweethearts would become engaged. Once Gordon got the happy news — in July 2003 — she worked with the pair to set the wedding date. In order to accommodate her future son-in-law's medical school classes, the best option for the wedding was New Year's Day 2005, with the rehearsal dinner on New Year's Eve.

First problem: “I hate New Year's!” Gordon says. But that's when her team of colleagues, whom she usually refers to as her “angel network,” came into play.

Prominent event designer John Daly, CSEP (John Daly Inc., International, Santa Barbara, Calif.), had often promised that when Roni Gordon got married, he would design her flowers. “And I said, ‘Twist my arm,’” Gordon says wryly. With daly on board, gordon began reaching out with phone calls, and her “angels” began to dream up the heavenly wedding. With Chicago's landmark InterContinental Hotel serving as the event venue, the team went to work.

In a total turnaround from the rehearsal dinner, Gordon envisioned a lush “Doctor Zhivago” theme for the wedding ceremony. The event team swagged the ceiling of the medieval-style King Arthur Court room, where 232 guests watched the pair exchange vows in a ceremony combining Jewish and Catholic traditions. Gordon's professional poise flagged only for a moment. As she walked down the aisle with her son and daughter, “I was losing my shoes — so I kicked them off!”

After the ceremony, guests moved to the Camelot Room for cocktails and hors d'oeuvre, where they plucked their place cards off a forest of 9-foot driftwood trees created by floral designer Tom Kehoe (Tom Kehoe Design, Chicago). Guests then entered the Grand Ballroom to find each table dressed in custom maize lamour with a bugle-beaded gold sheer overlay from Chicago-based BBJ Linen, and topped with a silver trumpet vase brimming with 100 red roses. They dined on a menu including a filet entree followed by wedding cake and one of Gordon's signature event touches — a sweet table laden with treats ranging from chocolate-dipped fruit to s'mores. Anthony Bollotta, president of San Diego-based Bollotta Entertainment, sang to the couple, and Larry King of Chicago-based Larry King Orchestra said “he never played so long in his whole career!” Gordon says.

As grateful as Gordon is for the remarkable skill and generosity shown by her “angels,” they say they were glad to pitch in.

“We all love Audrey,” says Charles Banfield (Charles Banfield Productions, Los Angeles), who gave design advice and shepherded Roni Gordon through her wedding day. “The choice to help in any way was a joyful and natural one.” Adds lighting designer Raymond Thompson (Images by Lighting, Los Angeles), “It goes back to the mid-1980s when we all met at The Special Event. From our hearts, we wanted to do what we could to help create her fairy-tale wedding.”

Gordon too credits Special Events Magazine and its trade show, The Special Event, with creating her professional network. “Special Events has played a major role in my business growth but, more importantly, gives me the opportunity to ‘schoomze’ with the greatest angel network on earth — my special friends that I've made by attending The Special Event conference for over 20 years. It's all about relationships. That's why I offer to speak at The Special Event — I want to pay back the show for what it's done for me as a person.”