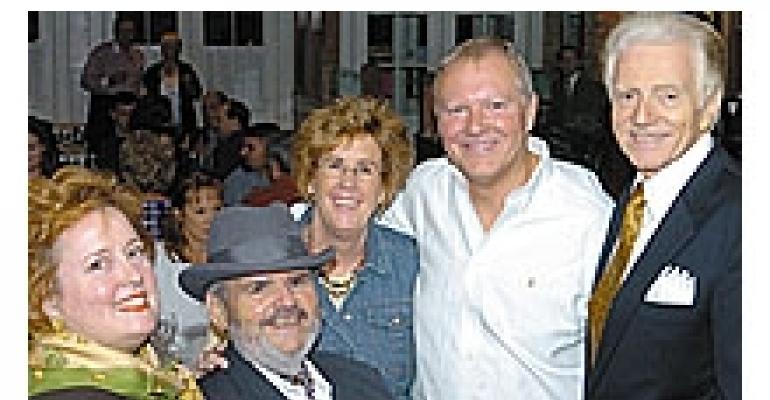 IN many ways, Bonnie Boyd, CMP, is New Orleans. A sixth-generation native of the Big Easy, she lives in an 1880s house in the famed Garden District and has run her New Orleans-based DMC — Bonnie Boyd & Co. — since 1992. In the aftermath of Hurricane Katrina, which struck New Orleans on Aug. 29, she is widely credited with coordinating the first corporate event in the city — a three-day meeting for 35 doctors and medical executives from Alcon Laboratories Oct. 14-16. Here's how she did it:

SPECIAL EVENTS MAGAZINE: How did Katrina unfold for your business?

BONNIE BOYD: {In the first three days} we did fine without lights, water, electricity or air conditioning because we were prepared for it. But when the water began to rise, that's when things started to change, and we decided it was time for us to leave. For the first four to five days, I was out of pocket completely because there were no phones and cell phones weren't working. But I had other staff that had evacuated to various and sundry places, and they were already taking business and placing it elsewhere. Our convention and visitors bureau {the New Orleans Metropolitan Convention & Visitors Bureau} was doing it too — they have done a spectacular job. We are also very fortunate in that we are members of Global Events Partners; they were very much in touch with all our clients because their clients are our clients in many cases. So we were able to use their infrastructure to move our accounts and make sure that our clients knew we were taking care of their business and doing what was best for them.

Q: How did you manage to stage the Alcon event in New Orleans — its traditional site — so quickly after Katrina?

A: Remember, the core areas of the city were not hurt. I think the Ursuline nuns {whose convent has stood in the French Quarter since 1752} — who protected us from fires, yellow fever, the Yankees — did it again; they kept the waters and winds of Katrina away from the French Quarter. {Alcon's} Carol Duke called and asked if we could help her with some hotel rooms in Baton Rouge {La.} and meet-and-greets, etc. I said, “I'm thrilled, but there are no rooms in Baton Rouge — half of the Gulf Coast is staying here. But give me overnight and I'll see what I can do.” I called {director of marketing} Mark Wilson at the Royal Sonesta Hotel New Orleans, and he was able to give us 30 rooms. I called Carol and said, “I've got the rooms — let's move the meeting back to New Orleans!” {Chef} Paul Prudhomme was able to get his permits, and he opened K-Paul's Louisiana Kitchen for us — the first time it had been open since Katrina. I knew in my heart it was the right thing to do; there was no reason for the meeting to be anywhere except New Orleans.

Q: How do things look in the next six months and beyond?

A: According to the convention and visitors bureau, as a city we are officially open and ready for business at Carnival, which is Feb. 28. But I can tell you that we are open and ready for business right now. You may not be able to go to Galatoire's, but you can go to K-Paul's, Dickie Brennan's, Bacco, Red Fish Grill. Everything is coming back. The American Library Association has rebooked — the first citywide — it will be here in June.

In 2006, I think it's going to be a slow, cumulative kind of movement. I think that there will be a great deal of interest — not only from curiosity but also from sympathy — for people particularly on the corporate and incentive side to propose New Orleans as a destination. I measure success and interest by how many proposals we are asked to develop. And that's like a crop; it's not going to be harvested till much later — this time next year, certainly in 2007.

So we do have some hopeful things. Some of the clients who had postponed or moved to other cities are definitely coming to New Orleans, and that has to do with commitment from clients and friendships and relationships.

Another thing that is very interesting: We see an increase in destination weddings. We are very involved with a {TV} program that is going to be airing about destination weddings planned for this area that were postponed or canceled because of Katrina.

Q: You are on your way to the SITE International Conference in Toronto — what message will you take to them?

A: I will give them the message that in spite of what the media has said, we are here, we are rebuilding, we are on our way. I just don't think that there is anything that can affect the city, that will keep us down. We are absolutely indomitable.