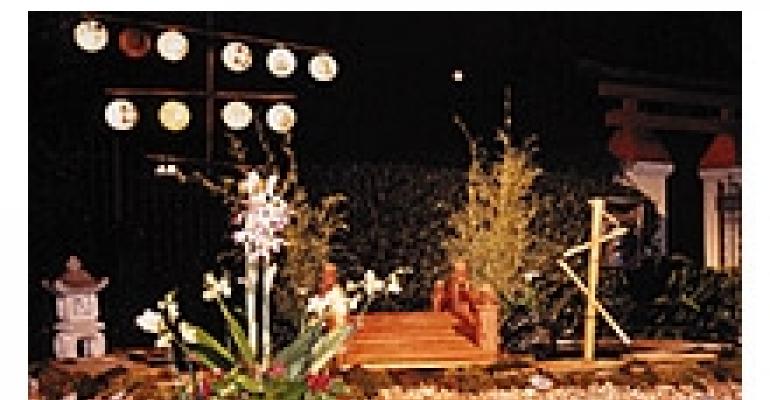 CAREFUL planning has its place, but being in the right place at the right time is also helpful. Just ask Billinda Wilkinson of San Antonio-based Wilkinson Rhodes, the company hired as producer for a 600-guest bash celebrating a San Antonio debutante last spring. Lots of research and a series of fortunate coincidences made the event, which has been nominated for a Gala Award, possible.

Wilkinson and her clients — the debutante and her parents — discussed themes ranging from Chicago to casino before deciding on “An Evening of Asian Splendors,” based in part on a stunning handmade butterfly-motif dress the guest of honor was to wear in the upcoming San Antonio Fiesta. The 10-day springtime event is similar to Mardi Gras, according to Wilkinson, with courts of young ladies making their debut. Since geishas were considered “butterflies of the night,” she explains, the event team decided to expand on the fanciful theme with contrasting vignettes of ancient Kyoto — represented with geishas and song birds — and Tokyo's electric Ginza Strip of today.

The juxtaposition of old and modern was particularly appropriate for a party where guests arrive in waves: It is a tradition of the San Antonio debutante season for parents to arrive at the festivities around 8 p.m. with the teenagers making their fashionably late appearance as late as 11 p.m. The staggered arrivals called for plenty of entertainment, Wilkinson says, “so the guests had something to do other than stand around and drink.”

Judging from the party's run time of 10 hours, the entertainment was a success. “They didn't go home,” Wilkinson says. She credits the 2005 film “Memoirs of a Geisha,” which came out as the party was being planned, as providing a “template and a footprint for what we wanted things to look like.” The event team also did extensive research to find appropriate entertainment, a common activity for the Wilkinson Rhodes team. “We gather books, we go to fairs; we do whatever it takes to make it work,” Wilkinson explains.

She says that for this particular event, she scoured Chinatowns around the country. At a bazaar in Houston's Chinatown, Wilkinson bought paper lanterns from a vendor and asked him where she might find Chinese contortionists. Because her grasp of the Chinese language is “nonexistent,” the man understood only the word “dancers” and pulled out a picture of himself doing a jeté. “It turns out,” Wilkinson explains, “at one point in his life, this man was the Baryshnikov of Chinese ballet.” The former dancer referred Wilkinson to his former partner who owns a dance studio in Houston that is certified by the Beijing Ballet. In addition to having young ballerinas from the studio perform, Wilkinson also found out that “the guy who does iPod commercials lives in Houston and is Chinese.” “So,” Wilkinson says, “Moo Moo came and did break dancing and brought down the house.”

These diversions joined the entertainment roster that the event team had already arranged, including a Rolling Stones look-alike band from Los Angeles called Sticky Fingers, a funk band from Austin, Texas, Japanese calligraphers contacted through the Japanese-American Society in San Antonio, dancers in butterfly costumes dressed by Dania, Fla.-based Designs by Sean and a living fountain from Treasure Island, Fla.-based 2nd Nature Productions.

While turning a Texas property into a garden of Asian delights — complete with an authentic Japanese teahouse built with bamboo from China and Japan — was tricky, Wilkinson says the real difficulties arose when the entire party had to be planned via text message between Tanzania and Texas. Just seven weeks before the event, Wilkinson's clients set off to Africa on safari, to return only after the husband killed a lion. “I've never done a party predicated on when we've bagged Simba,” Wilkinson quips. Eventually she told the clients, “You are going to have to trust me.” A good choice; Wilkinson says the night was “just magical and ethereal and really worked.”