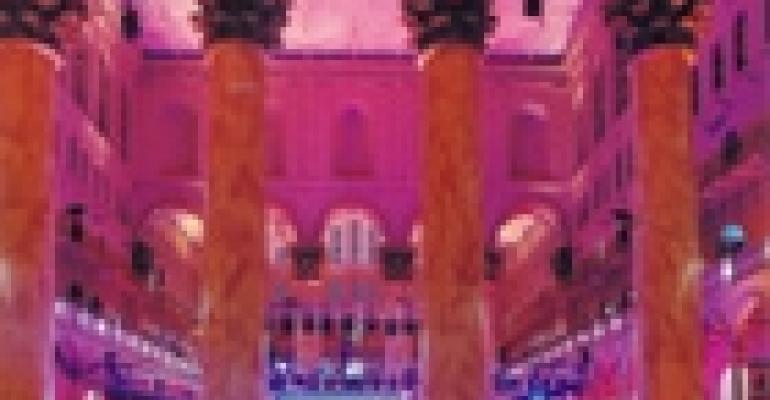 THE 54TH PRESIDENTIAL INAUGURATION brought thousands of revelers to Washington in January, all of them celebrating the installation of President George W. Bush.

From Jan. 17-21, fund-raising dinners, black-tie balls and a parade kept many event industry professionals scrambling to meet the demands of the events.

The balls took place Jan. 20 at the D.C. Armory, the Four Seasons Hotel, the Marriott Wardman Park Hotel, the National Building Museum, the Ronald Reagan Building, Union Station, the Washington Convention Center and the Washington Hilton. Guest counts at each event ranged from 4,000 to 12,000.

Current Events, which has worked on inaugural events since 1989, had to gather supplies and set up for the events in only 18 days because of the voting debacle. “Normally, you would have somewhere between 70 and 80 days — all of November, December and three weeks in January,” Sorin says.

In planning the lighting, Current Events worked closely with Lanham, Md.-based Hargrove, which provided decor. “The inauguration committee wanted to ensure that every ball had a level of consistency to it,” Patil says. “Decor and lighting had to go hand in hand.”

Each stage set included columns, fabric swags and presidential seals. Stage sets and room lighting had to be consistent in each venue, and include red, white and blue colors. “All of the balls had ambient light in soft colors so people looked good,” Sorin says. “These sets were in the video bites used on the news.”

Government-related events call for special consideration, especially when it comes to the president's safety. Before each event, the Secret Service gives each venue a security check. “Everyone must leave the building so they can safeguard the security of the president,” Sorin says. “If you aren't prepared for the security check, it can eat into your time, like five or six hours. If your event is Thursday evening, they might decide to come in on Thursday afternoon. You have to be done at the time the sweep is scheduled because you might not get more time.”

Bush's inauguration drew interest worldwide. “There were 15,000 members of the press accredited for the inauguration,” Sorin says. Current Events provided audio feeds to 700 media outlets. “They're like no other event we do,” Patil says of the televised inaugural events. “There is no room for error. We are live, and it better be good.”

Dallas-based chefs Eddie Deen and Kent Rathbun paired up to cater the Texas and Wyoming (Blue) Inaugural Ball and the Ohio (Red) Inaugural Ball, both held at the Washington Convention Center.

Rathbun, owner of Abacus Restaurant, says he and Deen, of Eddie Deen Catering, were charged with providing a Texas-style barbecue menu, but with an upscale flair. “Eddie's people were responsible for doing smoked meat and grilled meat and display foods like fruit and cheese,” he says. “My team was responsible for the tray-passed hors d'oeuvre. We had an assembly line of people building the hors d'oeuvre and handing them to waiters who passed them around.”

As the inauguration drew close, there was such a demand to attend the Texas and Wyoming Ball that the planning committee created an overflow ball for 3,000 more people. The additional guests meant that Rathbun and Deen had to provide food for 20,000 people.

A tall order such as that calls for a big kitchen. “If we had not had three semitrailer trucks on site, we would have been in a world of trouble,” Rathbun says. One truck held ice, one held meats, and one held produce. “We worked out of those trucks, prepared the food in the kitchen, then stored it in the walk-in refrigerators.”

To prepare for the big night, the catering teams worked 16-hour shifts for two days and then “Saturday from 4 a.m. until 3:30 a.m. on Sunday,” Rathbun says. Nearly 300 people worked on the events, 200 of them waiters. “We hired staff from different cities around Washington.”

Wheaton Party Rentals of Beltsville, Md., provided rental equipment for many events with 300 to 400 guests.

Working on the events means a lot of work in a short time, but Goldberg says he welcomed the task. “Normally, it's a slow part of the season for us.”