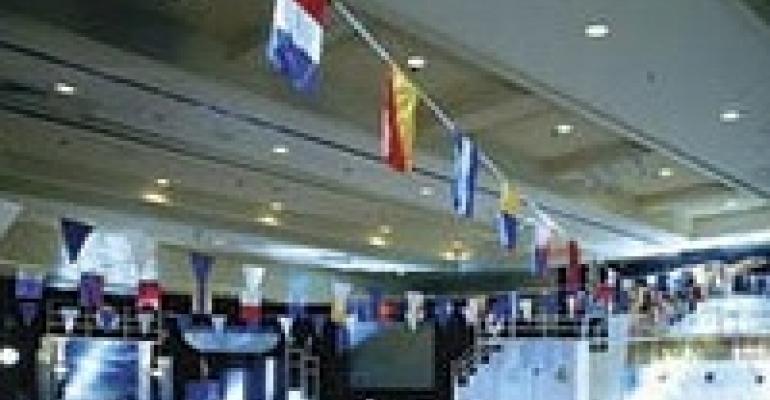 Cruises may bring images of shuffleboard, seasickness and retirees to mind, but Long Beach, Calif.-based Bravo Productions overhauled the concept. The event team shanghaied 270 guests from Enterprise Rent-A-Car employees with all the engaging elements of a voyage but none of the waterlogged conventions.

The Enterprise Awards Cruise in Palm Springs, Calif., celebrated the annual honors and the company's 50th anniversary on the “S.S. Enterprise.” Because 80 percent of the audience was between the ages of 25 and 40, Bravo Productions upped the ante for the Generation X- and Y-heavy crowd. “This younger generation cannot be easily fooled by gimmicks, and their sense of style is a lot more relaxed,” says Greg Jenkins, partner at the company.

Careful research helped the extravagantly themed event get its sea legs. The event's nautical theme paid tribute to Enterprise's founder, Jack Taylor, who served on the USS Enterprise in World War II. Bravo changed the Palm Springs Hilton into a bustling cruise ship with plenty of activities and entertainment — from an Elvis impersonator serenading guests to a casino area to the movie “Ocean's Eleven” playing in the “Ocean Bar.” Even the invitation was presented as a ticket inviting guests to set sail from “Berth 50, 69.56 nautical miles east of Los Angeles.”

To develop the plan for the event, Bravo conducted a SWOT analysis — shorthand for studying the strengths, weaknesses, opportunities and threats of a venture — to reveal the pros and cons of a cruise-themed evening. While the theme's assets include its exotic, adventurous image, the analysis revealed cruises are associated with an older demographic, and have been tainted by recent news reports of illness outbreaks aboard ship and even of missing passengers.

To play up only the positives of cruises, the event team transformed the hotel's ballroom into the most exciting parts of an actual ship — the exterior areas and lido deck. “While the exteriors of most cruise ships are quite majestic, the interior of most vessels are described as no more than a floating hotel,” Jenkins says. Two video screens running footage of a cruise departing from a dock added interest in the main function space. The stage was capped with a smokestack and flanked by four lifeboats for an at-sea feel. Other details included gobos of water, overheard railings and blue- and white-striped fabric columns.

Working on a tight budget, the team relied on inexpensive furnishings and do-it-yourself projects. Easy-to-get items such as portholes, life rings, brass lanterns and life preservers dressed the scene, and international marine flags hung from the ceiling. “This brought a sense of realism to the setting,” Jenkins says. Other thematic elements included throw pillows and lamps, which “we spray-painted, dressed with fabric and tied with marine rope in a slip knot,” he notes. The carefully created casual decor “brought its own sense of style to the event,” he says. “It made the setting more relaxing and appropriate to fit within these generations' lifestyles.”