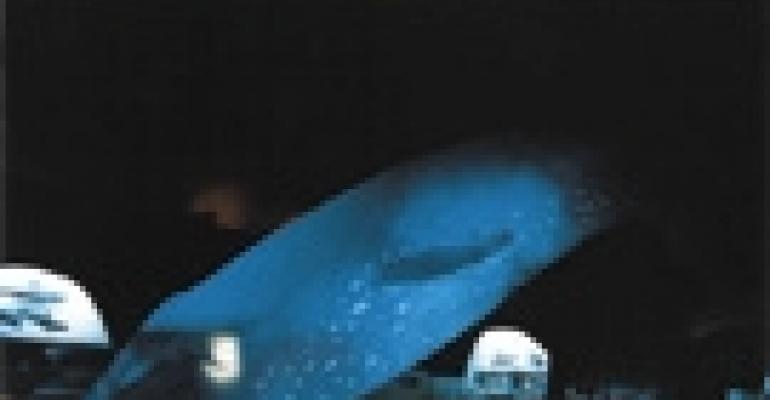 The first evening featured an elegant dinner for 300 VIPs in the Hall of Ocean Life at the museum. Entertainers in animal costumes escorted guests through the wildlife area to the hall, where they were greeted by sea nymphs who led them to the main dining area downstairs. Dramatic lighting washed over a 94-foot replica of a blue whale hanging overhead while the sounds of crashing waves played so that you felt like you were underwater, Spaeth notes. New York-based Bentley Meeker Lighting & Staging provided the lighting.

Because of the renovation, we couldn't touch anything, she notes. Everything had to be on wheels. With just one hour allocated for setup, Spaeth was taken by surprise when an entire train let out at the exact time we were told we could roll out. She attributes the success of the setup to military precision. L.P.

Make a lasting impression on an important corporate client or bridal party with a custom-created photo album, handcrafted and designed by New York bookbinders Weitz, Weitz and Coleman. Every detail can be customized, from the color and cover design to the size and weight of the paper inside. For this one-of-a-kind gift, contact the company at 212/831-2213 or visit www.weitzcoleman.com for more information.

Your Rolodex might feel neglected once you discover Hallz.com, an online reception venue directory providing addresses and phone numbers for venues across North America. Listing hotels, restaurants, banquet halls and golf and country clubs, this Mississauga, Ontario-based Web site is one of the first online directories devoted exclusively to reception venues, according to the company. For more information, visit Hallz.com at www.hallz.com or call 877/562-2202 or 905/607-0996.

Though it's unpleasant to acknowledge, liability risks are a fact of life in the off-premise catering business. NACE members will be relieved to learn there is a new loss control program geared specifically toward off-premise caterers, focusing on the risks they face, including hiring practices, personnel safety issues and food spoilage. The program begins with an auditing process in which a representative from Columbus, Ohio-based Quadrant Insurance Managers assesses the caterer's liability exposures and compliance with regulatory acts and agencies, such as the Americans with Disabilities Act and OSHA. The program offers monthly safety newsletters, special education seminars and insurance coverage in areas such as liquor liability, food spoilage and adulteration, boiler and machinery, and valet parking. For more information, NACE members can contact Quadrant Insurance Managers at 614/841-1425 or visit its Web site at www.quadrant-us.com.