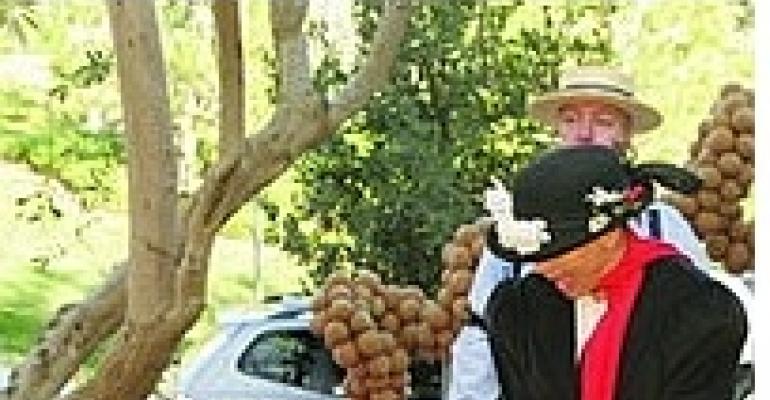 Confetti: The Nanny Comes to the Party

Risa Provencio, event and wedding consultant for San Clemente, Calif.-based Romanza Events, had never attempted anything like the 56-guest tea party themed to the 1964 Disney movie “Mary Poppins” that she created in December. “Before this event, I wouldn't do children's parties, but the theme was great,” Provencio says. “My head just started spinning with different ideas.”

Thrown for a four-year-old, the theme party — complete with soda jerks, maids in mop hats and aprons, and parasols as decor — had to please kids and adults alike. Tea was poured in the host's backyard, and because 32 guests were adults, “The mom wanted an upscale and elegant feel,” Provencio says. “And it's hard to come up with cute things for kids that are elegant and edible.”

To keep boredom at bay, the afternoon included a roster of activities for the tots. A face painter, balloon twister and silhouette cutter entertained in the client's front driveway — the only space big enough for all the vendors. Provencio designed an entryway of balloons in the shape of a teapot and teacup, and installed pipe and drape with pink linen to provide privacy from neighbors.

Kids stuffed their own teddy bears, an activity chosen by Provencio because the toy was introduced in 1907 — the setting of the story. The children also made kites, a nod to the kite-flying scene in the film.

And speaking of the famed nanny, “Mary” herself made an appearance at the party to the sound of a barbershop quartet singing the song “It's A Jolly Holiday with Mary” from the movie. “The kids really loved the characters,” Provencio says. “I think they think they are real.” Burt the Chimney Sweep also arrived to play with the children and help them with games including a “spoonful of sugar” relay and “teabag toss.”

Even though the guests were smaller, pulling off the party was no small feat for Provencio. She says that the guest count went up by 16 people only five days before the event, causing last-minute scrambling and rush orders for favors and seating arrangements. “It was fire-drill stuff,” she says. Still, Provencio says she'd like to plan more children's events, including bar and bat mitzvahs. “It's a lot of work, but it helps me tap into a side of me I like, where I can get creative and a little more over-the-top,” she says. “Weddings are serious; with events for kids, I can get more fun and whimsical.”