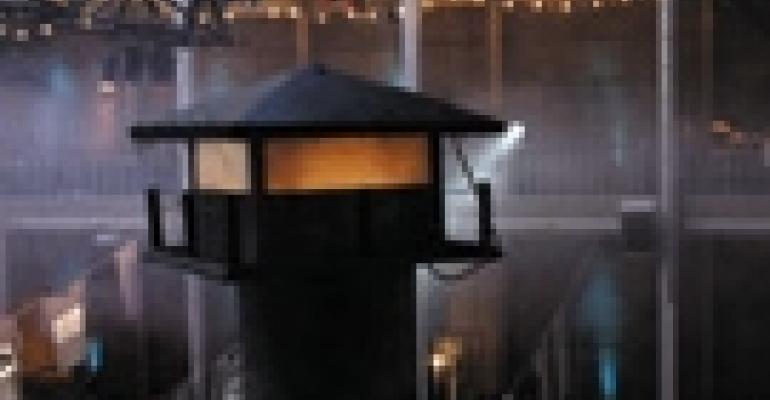 Creative director Sheri Wagner took advantage of the venue's three levels and atrium to create three prison floors. “The first floor could not accommodate all 1,500 people,” she says. “We made each level a different section of the prison to draw people up to the other floors.”

As guests walked up to the prison guards at the first floor entrance, blue searchlights circled the area looking for “prison escapees,” says Star Trax president Craig Ehrlich. Pine trees, rocks and boulders were scattered throughout the first floor and atrium to make them resemble a prison yard. The second floor served as the cell block, complete with prison bars. The prison laundry, with hampers full of black-and-white striped prisoner attire, was on the third floor.

Wagner says entertainers such as “tattoo” artists, mug-shot cartoonists and a Motown cover band were spread out to ensure traffic flow.

San Francisco-based caterer Now We're Cooking carried the prison theme into the buffet menu. Guests filled their prison trays with servings of The Rock soup, and helpings from the Seafood Slammer and Penitentiary Pasta stations.

Wagner says Star Trax used creativity to stretch the client's dollar. “The sponsors wanted to display their logos at the event,” she explains. “Instead of creating additional banners and signage, we took the logos and printed them on the prison laundry sheets and strung them up in the laundry area.”

Even more than exercising creativity, picking the right venue was imperative in staging the event. “The Center has a lot of exposed brick and wrought iron,” Ehrlich says. “It just lent itself to looking like a prison.”