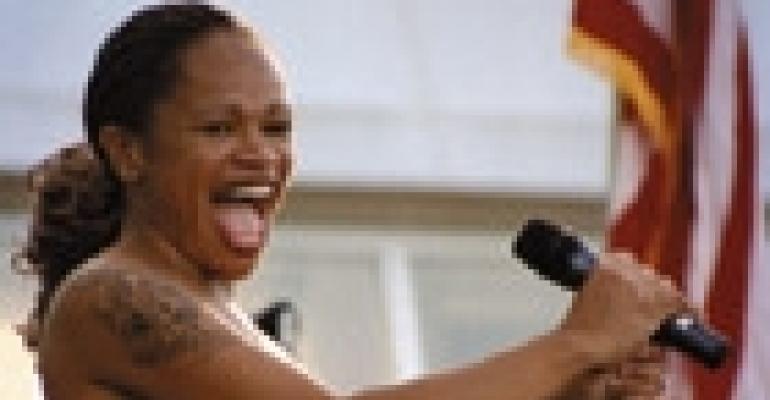 In today's business world, the days of easy-does-it events are over.

The pressure is on event professionals to deliver a top-quality event on an air-tight budget. There's no falling back on obvious theming; the style must be subtle, but the impact immense. And don't even think about calling the event a success unless its effectiveness can be documented.

In spite of these challenges, event professionals are turning out corporate special events that give attendees both a great time and a clear message.

Although some event professionals predict that the demand for special events that simply say “thank you” to employees or clients may be softening in the skittish economic climate, corporate spending on events as a way to boost brands should increase.

According to a February report in The Wall Street Journal, 64 percent of marketing officials at 130 companies surveyed by the Conference Board expect spending to market their brand to employees to rise because internal branding helps recruiting and retention.

As an example, Canton, Mass.-based Reebok International opened its new world headquarters, underscored its brand's commitment to the world of sports and gave employee morale a shot in the arm all at the same time with a gala ceremony in September.

Although Reebok originally wanted just a ribbon-cutting for employees, Boston-based event producer Millennium Events suggested capitalizing on the ceremony by bringing in employees' families along with state and local officials to underscore the company's importance in the economy, according to Millennium's Doug Bell. The ceremony turned into a daylong event for 2,000 guests that included company softball and tennis tournaments, appearances by the Boston College marching band and Harlem Globetrotters, calypso music, a barbecue and a fireworks spectacular above the new headquarters.

A follow-up survey from Reebok's communications department brought in such positive comments as: “The entire event gave me such pride to work for this great company. It renewed my faith in Reebok.”

In a similar vein, sports drink manufacturer Gatorade of Chicago and Star Trax Corporate Events of Southfield, Mich., worked to renew employee commitment to Gatorade during a three-day managers meeting in January.

According to Star Trax president Craig Erlich, Star Trax invested time “gartorizing” the venue — the Hyatt Ganey Ranch in Scottsdale, Ariz. — with custom orange and green stretch linens, Gatorade's signature colors. Along with staging business sessions, the event team stressed the sports background of the beverage with events such as a “tailgate party” dinner featuring a tent equipped with a “locker room.” On one evening, the managers went into the desert for a “Survivor” set of challenges to encourage bonding.

Measuring the return on events is vital, Erlich says. “We take all our clients through a five-step process … we must demonstrate what impact we had on their goals.”

Palo Alto, Calif.-based Hewlett Packard worked with Contempo Design of Irvine, Calif., to create an event at a computer users conference in Dallas in October that would mark HP's presence while underscoring the company's role as both an industry founder and innovator. Contempo developed an event for 400 that included a reception, dinner and entertainment, all subtly reinforcing HP's prominence in the industry.

For example, guests entered the cocktail reception through a replicated garage façade, a reminder that company founders Bill Hewlett and Dave Packard started their business in a garage. The blue of HP's corporate logo carried through in areas designed as a rustic Southern blues bar and a sleek blues club. In the blues club, a blue neon sign hung above the stage read “The Blues … re-invented.” Cobalt blue linens and blue martini glasses echoed the theme; entertainment included blues artists.

Did the event resonate with guests? Given the fact that by the time the second performer came on stage, “many attendees were using their cell phones to call up their associates who were attending a competitor's ancillary event at the same time and [telling] them to come to ours, we felt we had satisfied the client's wishes,” says Heidi Olson, Contempo director of event management.

Just as Contempo used its client's corporate color as a subtle identifying element, Janet Elkins, president of Los Angeles-based event producer EventWorks, points to a move away from overt themes toward what she calls “atmospheric events.”

In January, her team put together a product launch party at the Anaheim, Calif., convention center on the final night of a convention for 3,000 employees of a pharmaceutical company. The event featured a futuristic look (metal screening, floating spheres, inner-lit tables) inspired by the recent film “The Matrix,” but not directly tied to it. “It was nothing like they had ever seen before, yet it did not beat them over the head with a force-fed ‘theme,’” Elkins says.

A themed event “probably would have included look-alikes and more interactive entertainment or decor specifically related to the movie,” she says. The difference between themed and atmospheric events is “subtle but important,” she adds.

Event professionals are under increasing pressure to demonstrate the business payoff of the special events they stage. For a January global sales conference, Dearborn, Mich.-based Ford Financial (the financing arm of Ford Motor Co.) and event producer Mills/James Productions of Columbus, Ohio, took some big risks, but reaped some stellar results.

Ford Financial management wanted to demonstrate that with a new CEO and new goals, “it was not going to be business as usual,” explains Ron Swartz, Mills/James director of business theater and special events.

The event team made a bold move, spicing up the usual dinner and awards evening for 1,100 with elaborate Broadway production numbers including not only professional music, singers and dancers, but acts featuring top company executives in costume. “Each got a standing ovation,” Swartz says. After the awards program and a product reveal, the program ended with pyro and tuxedo-clad performers and executives high-kicking to the finale “One” from “A Chorus Line.”

“The whole point was we created a situation that put senior staff in roles that their staffs would not see them in,” Swartz explains. “We showed them as risk-takers.”

He also notes a demonstrable impact from events at the conference: “More than 90 percent of respondents said the [new corporate] roles were defined [and] they were inspired and motivated and expected the conference to improve their job performance.” On the final day of the conference, the Ford Financial group increased its 2001 revenue commitment to its parent company by almost 10 percent; Swartz says: “That was done from within the ranks, it was not something the executives were leading.”

In the face of growing pressure for events to serve business goals, the special event as pure celebration shows no sign of disappearing.

Working with designer Sean DeFreitas of Dania, Fla.-based Designs by Sean, Wickrema played off the exotic charms of the Atlantis Paradise Island resort, Bahamas, to create five days of receptions, dining and relaxation. Day 3 offered the main special event: a Night of the Gods dinner including dancers, fire-eaters, pyro and a Mayan priestess' tongue-in-cheek incantations on behalf of Metiom's fortunes in the e-commerce marketplace. The client's reaction: “The response was, ‘Nothing compares to this,’” Wickrema says.

In a similar mood, Los Angeles-based event producer Jack White teamed up with Classic Party Rentals of Los Angeles and San Diego to stage a basic “kick*** party” at the San Diego Zoo and Wild Animal Park in April given by a supplier for 2,300 attendees at a medical convention. “They were there to eat, drink, dance and have a great time,” White says.

Classic worked around an awkward event area split in half by a fire lane by creating a cluster of canopies, including a 40-foot octagon canopy in the center flanked by smaller canopies, all linked by amber stringer lights. The only signs of the sponsor were gobos of its corporate logo.

White avoided clichéd animal prints for reception area decor, going instead with solid colors and fresh orchid centerpieces. Guests enjoyed visiting animal exhibits after hours and kept the band busy. “It started raining at 11:30 p.m. and no one left; they danced in the rain all night long,” White says.

For corporate special events, the stakes are high today. “You only get one chance,” Erlich says. But the rewards are plentiful. Do the event right “and you're always going to win.”

For archived articles on corporate events click on the following links: