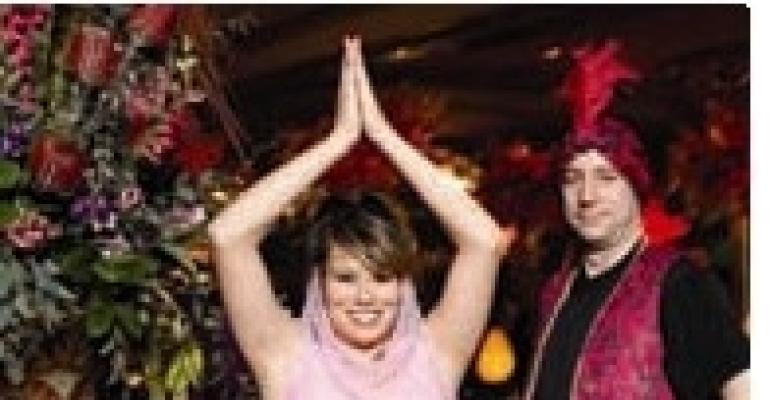 Theme trends come and go, but what about “themes” themselves? “Environment” is the big buzzword these days, with some professionals preferring understated event environments over obvious themes. Yet, both environments and themes have their place — but when to opt for which? These event experts weigh in.

Theme events are rarely subtle. Instead they are “a larger-than-life experience of the actual theme,” says David C. McKnight, owner and creative director of Emerald City Designs in Farmington Hills, Mich. Teens especially like themes for their mitzvahs and Sweet 16 celebrations because their hobbies and interests can be the focus of the party, notes Terry Singleton, CSEP, president of CCP Events in Atlanta.

But adults do their share of theming too. P.J. Hummel, president of PJ Hummel & Co. in Tacoma, Wash., notes that corporate events, holiday parties and product-launch celebrations lend themselves to theme fêtes. And Singleton prefers themes over environments for one good reason. “Themes tend to be a much easier sale,” she says. “It is a tangible product with easy recognition by the attendees.”

Emerald City Designs created “Club 222” for its open house in February 2005. Decked out in black and apple-green with silver accents, the company's 8,000-square-foot warehouse served as the “club.” The entrance to the event included such thematic elements as a marquee, a limo waiting outside and a bouncer armed with a guest list. Logo'd silver martini shakers served as party favors.

In the interest of keeping it rich, Toronto-based Decor & More developed “An Evening with the Vanderbilts” for a casino client who asked for an opulent event for its high rollers in December. According to co-president Dan Noot, “Everything needed to be gigantic” to properly fill the 50,000-square-foot space that included 50-foot ceilings, a 32-by-28-foot fireplace and 58 crystal bowl chandeliers; candelabras, lush floral and meat carved alongside the table provided additional sophisticated touches.

Can a Midwest city turn into Morocco? Yes — with some clever theme decor. In February, the Meetinghouse Companies in Elmhurst, Ill., offered up a “Rock the Casbah” event for VIP customers of a Chicago hotel. The soiree included four different settings: a marketplace, the sultan's palace, a dance club and a desert oasis. A live monkey and his handler greeted guests, who were given satchels of wooden tokens to barter with costumed shopkeepers for jewelry, robes and turbans. Lighting mimicked the sun's rays, and sandalwood scented the scene. Belly dancers and “genies” kept things interactive by roaming the marketplace and dance floor. Food included flaming pineapple skewers and chocolate “snakes” on mounds of brown sugar “sand.”

Environments tend to be less literal, event experts agree. Margarita Heinzel, CSEP, vice president of special events for the Meetinghouse Companies, says environments “capture the essence of a theme” through the look, scents, sounds and food. Decor and More's co-president, Leslee Bell, who describes environments as “arguably more sophisticated,” adds they “evoke an emotion or attitude as guests engage in the event.”

And while some professionals say the corporate world leans toward traditional theme events, others say this segment prefers environments. McKnight notes the corporate segment is more likely to want something detailed and tasteful, which “is definitely an atmosphere event,” he says. Singleton agrees, saying that subtle environments give corporate clients more ability to use branding or company color throughout the event. As for fundraisers, Heinzel says roughly half are environments and half themes.

For his part, Noot prefers environment events because they let his team flex their creative muscle. “If a planner brings us in to design and create an environment, then typically they are delegating more of the creative ownership to our team,” he says.

Opting for the best of both worlds, one September 2006 party in Toronto Decor & More produced “began themed and ended as an environment,” according to Bell. The start of the evening featured an “Amazing Race”-style event with guests driven around in limos. With the completion of the race, guests enjoyed an event with edgy Italian furnishings, glass block bars, towering vases and a surprise reveal: the announcement of the host's and hostess' recent marriage in Hawaii.

THE TRENDS, THEY ARE A-CHANGIN'

Here's a list of event themes planners say they've seen one too many times, and a list of themes and environments they say are on the radar and all the rage. Of course, that doesn't mean tried-and-true themes will go away. When a planner receives a request for an oft-produced theme, Decor & More's Leslee Bell says “giving it a customized feel rather than a prepackaged, dime-a-dozen look” can make it seem fresh again.

BEEN THERE, DONE THAT