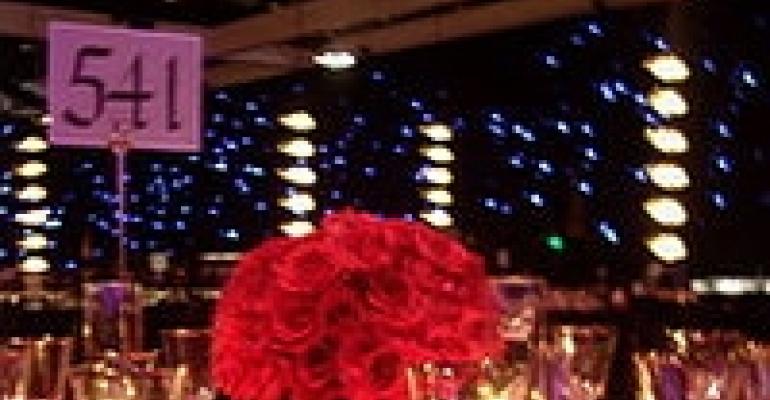 This year's Primetime Emmy Awards Governors Ball, slated for Sept. 21, will celebrate its 60th anniversary with a traditional diamond motif. The media saw a preview of the "diamond anniversary"-themed affair on Thursday.

Once again under the direction of longtime producer Sequoia Productions, based in Los Angeles, the event will take over the 147,500-square-foot West Hall of the Los Angeles Convention Center. The 3,600 expected guests will walk to the hall after the ceremonies at the new NOKIA Theatre at the L.A. LIVE entertainment center across the street.

The event team will transform the plain Jane exhibit floor into a sleek, 1950s-style supper club. Keying on the song "Diamonds Are a Girl's Best Friend," memorably sung by Marilyn Monroe in the 1953 film "Gentlemen Prefer Blondes," the dinner tables will feature a mix of black and gunmetal gray stretch linen from BBJ Linen shot with accents of shocking "Schiaparelli" pink, a color featured in the film. Seating will be a mix of chairs clad in skintight black covers as well as Chameleon Chair Collection's gleaming "Fanfare" model with woven backs and black suede cushions. Round tables will appear on two seating levels with rectangular tables on the other two. Los Angeles-based Classic Party Rentals will oversee rentals.

Floral, created by Kevin Lee of La Premier of Beverly Hills, Calif., will feature a mix of fuchsia and red rose spheres perched on black velvet cylinders, each accented with a diamond "bracelet" at its base.

The walls will be lined with glowing starcloth. Suspended from the ceiling will be strings of "diamond" pendants.

Los Angeles-based Patina Catering will serve the guests with an army of 445 waiters and 85 managers.