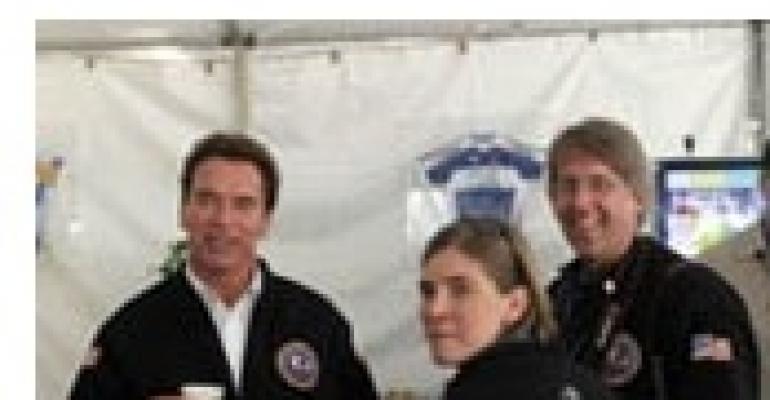 Eat to the Beat, AEG team up for bicycle race

Winning an elite bicycle race takes stamina, strategy and skill. The same can be said for managing a touring catering operation. British caterer Eat to the Beat took high-end catering on the road in February, serving some 9,000 VIPs in 10 cities over the course of eight days for the first Amgen Tour of California race.

With the tour, Los Angeles-based race presenter AEG hopes to create an event "that will one day rival the Tour de France," according to Timothy J. Leiweke, AEG president and CEO. This year's race, which took place Feb. 19-26, got off to a hot start, drawing more than 1.3 million spectators to a course that ran 600 miles through California, from San Francisco to Redondo Beach.

The quick pace of the cyclists was matched by the team from Eat to the Beat, which provided corporate hospitality at both the start and finish locations each day. "On average, we were catering for 150 guests at the start locations and 450 people at the finish locations," notes Bonnie May, operations director for Eat to the Beat parent company Global Infusion Group. She estimates that the catering team turned out more than 70,000 items of food for the VIP guests.

The event team routinely turned parking lots into reception areas. "Everything took place in temporary structures, with the start team loading in at 2 a.m. and the afternoon team loading in at 8 a.m.; these guys then starting building the structures, and the caterers arrived on site shortly after to set up," May explains. Each day, the race began and ended near the hospitality tents, although on the longer courses, "the riders had left the start location before the build started at the finish location!"

The lightning-fast load-ins and load-outs were "unbelievably challenging," says Karen LuKanic, AEG senior director of special services. "The tents were up just three to four hours before the guests arrived."

AEG, which is already making plans for next year's race, takes pride in delivering a flawless event to title sponsor Amgen. Amgen "is very involved in special events, and a very tough critic," LuKanic says. "It was good to be able to meet and exceed their expectations." She adds that she knew the event team had scored a win when she overheard a VIP say, "I feel sorry for the other cycling events, because [the Amgen Tour of California] has set the bar so high."

For the complete story, see the May issue of Special Events Magazine.

[Webinar] Prepared for Anything: How to Set Up Your Event Program to Weather Any Storm
Jul 11, 2022