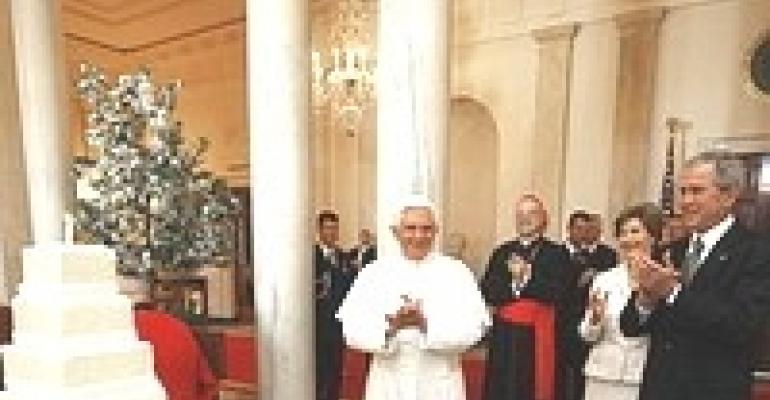 During the recent papal visit, Washington-area Voila Meetings and Events was the answer to an event pro's prayers. The team helped ensure seamless visits in Washington and New York for Pope Benedict XVI last week on his first journey to the U.S.

CLOSE TO ITS CLIENT

Voila won the business thanks to the "long-standing relationship" that company principal Eden Capuano and business partner Olivia Immerman have developed with the United States Conference of Catholic Bishops, Capuano tells Special Events. Despite her team's ability to collaborate easily with its client, however, the event was a challenge, Capuano notes.

"Our contacts called us in September and asked us to research the booking of D.C. and New York properties," she says. "Finding their housing needs was a task in itself as we were looking for two hotels in each city with 500-plus room nights and plenty of meeting space." Making matters worse were the busy season and tight timeline: "Springtime in D.C. and New York, under six months' out," Capuano says. "The topper was, we could not say that the space was needed for the papal visit!"

The pope's first stop was in Washington April 15-17, which included a cake served at the White House to honor his 81st birthday, meetings with clergy and a mass at the newly completed Nationals Park.

The three-day New York leg of the pope's visit, April 18-20, was packed with events including an address at the United Nations, a seminary visit, a visit to the 9/11 site, a drive down famed Fifth Avenue and masses at both St. Patrick's Cathedral and Yankee Stadium, the latter drawing more than 57,000, according to Catholic News Service.

Celebrity chef Lidia Bastianich cooked dinner the nights of April 18 and 19, which the pope spent in the Manhattan home of Archbishop Celestino Migliore, the Vatican's representative to the U.N., CNS reports.

Asked if the papal visit came off as planned, Capuano replies, "With an event of this magnitude and the number of players involved--i.e., the Secret Service, local police enforcement, the Vatican, the USCCB, archdioceses of both D.C and New York, etc.--it’s not about how perfectly things ran from a pre-planning perspective but how well we were able to react to the on-site changes occurring around us each hour. From that perspective, yes, things went amazingly well." She adds, "The pope’s visit was a tremendous success, and we are so thrilled to have played a role in this historic event."

At press time, Capuano and team had not yet tallied up the staff hours invested in the papal visit. (Indeed, during her interview Tuesday with Special Events, two days after the pope left the U.S., Capuano laughed, "I'm still in my pajamas!") "We can say without hesitation that we have never before experienced such a time-consuming program," she notes. Remarkably, the company worked on a trade show for 1,500 attendees the Saturday before the pope's visit as well as on planning for other clients.

GEP Washington president Marty MacKay notes her company's work in high-pressure Washington means "We are very used to working with [security]; we know the drill." The biggest headache, MacKay says, was planning logistics for the April 17 mass at Nationals Park, which had opened officially only two weeks before. That mass was attended by 45,000 worshippers.

After working with many corporations who keep a low public profile for their events, it felt "strange," MacKay says, to see the event she was working on dominate news coverage. "What can you do that is any larger?" she asks rhetorically. "It was an honor."