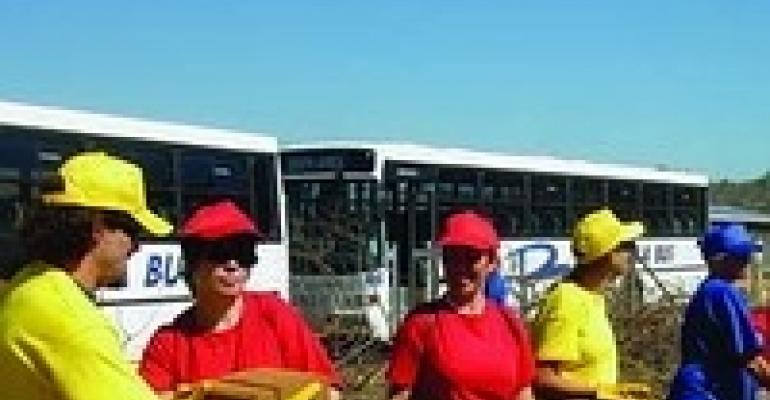 Events with a Social Conscience

Although special events are often painted as nothing more than frivolous fun — sometimes with a little fundraising thrown in — a growing number of hosts are creating events where the guests work hard to do good.

British pharmaceutical firm Norgine decided to celebrate its 100th anniversary not by touting its strength or size, but by aiding some of the humblest people in the world. For its “Century of Excellence: Making a Difference” conference, the company built housing in Mabele-A-Podi, a township outside of Sun City, South Africa, where many children have lost both parents to AIDS.

Months ahead of the four-day conference, which was held in September 2006, Norgine employees began fundraising to cover the cost of materials. Once in Mabele-A-Podi, 350 employees worked for two days at such demanding tasks as digging trenches and mixing cement. Attendees were so enthusiastic that they broke ground on five housing sites instead of just the original two.

The big-hearted event was managed in a hardheaded way. Event producer World Events of Leeds, England, helped settle on the Sun City site over three other contenders because of its convenient location for European travelers, favorable exchange rate and affordable construction costs.

Besides its social consciousness, the event stayed environmentally conscious, too. Paper use was kept to a minimum thanks to online registration and downsizing of agendas and information booklets. Because the Sun City resort offers a range of venues within walking distance for conference activities and meals, transfers were limited. Event management stressed the use of local food and beverage, and recruited local audiovisual support, reducing the need for shipping. Conference delegates themselves painted canvasses that were used as backdrops on the conference set, underscoring the theme of accomplishments through teamwork.

Norgine employees are already planning to build even more housing at the next global conference, in 2010.

Sherman Oaks, Calif.-based Extraordinary Events helped client CEMEX create a team-building event in Cancun, Mexico, that took 300 executives miles away from the resort's famed playgrounds to rebuild another sort of playground — at a school for poor children.

Monterrey, Mexico-based CEMEX, an international producer of cement and other building materials, has committed to giving back to communities in which it operates. Extraordinary Events suggested the company end one of its business conferences with the executives pitching in to rebuild a dilapidated school in a Mayan community near Cancun, site of the conference.

The event team invested three months preparing the school site: restructuring plumbing, installing electricity and laying the foundation for a library — a first for the school.

On event day, in October 2005, the executives watched a video showing the dreadful conditions at the school before the project started, followed by the changes taking hold over the 90-day preparation period. The executives were divided into teams — electrical, landscaping, plumbing, etc. — based on their own skills, then boarded busses for the hour-long drive to the site. Once there, the executives were joined by local students and parents to lay sod, paint, finish the electrical work and apply stucco.

Of course, the project used CEMEX building products. “The sight of so many active CEMEX cement trucks was awesome to many of the executives who rarely have the opportunity to see their products in action,” says Extraordinary Events founder Andrea Michaels, “much less personally put to use in the field.”

In a touching display, all CEMEX executives brought books cherished in their own childhoods to supply the new library. “At the end of the day, the executives had figuratively and literally influenced, if not entirely changed, the lives and education of more than 600 children and their families as they experienced first-hand the core business of CEMEX,” Michaels says. “It was a lesson in how important their product was. Plus, they learned a valuable team-building lesson as they worked with one another across culture and language barriers to achieve a common goal while changing the lives of an entire community.”

Of course, social events have long been a great way to raise funds for worthy causes. But in May, a group of 13 prominent businessmen in Calgary, Alberta, joined together to turn their own 50th birthday parties into one big benefit bash. Organizers of the “You Ain't Seen Nothin' Yet” party never pleaded for sponsorships, and even said that admittance to the event was free. Yet the event pulled in just over $3 million (Canadian) and netted 80 percent of that, all donated to the fight against prostate cancer.

The 13 “birthday boys” sent family, friends and business contacts invitations to the “free” party but asked for financial support before the event and added that “meaningful” donations were expected at the door — a sly move that brought in another $585,000 that night. Although each birthday boy had a limit on the number of guests he could invite, buzz about the upcoming party led people not invited to ask if they could purchase tickets.

The night of the party, produced by Calgary's E=MC2 Event Management, 1,550 guests were treated to time-travel back through the 1950s, '60s and '70s — formative years of the birthday boys. Guests were invited to dress in period clothes; for the fashion-challenged, the party even had its own Web site offering style tips.

The event started in the lobby of Calgary's Jubilee Auditorium — the only venue in the city big enough — decked out in 1950s decor including diner facades, roller-skating girls and James Dean wannabes. After hors d'oeuvre, the auditorium opened for the show, which offered a mix of comedy and '60s headliners such as Peter Noone of Herman's Hermits and Burton Cummings of the Guess Who. In a poignant moment, one of the birthday boys took the stage to relate his own experience with prostate cancer and ask for help in the battle against the disease. After the performances, guests returned to the auditorium to find it flipped to a chic, “Asian fusion” theme.

The audience was so moved that contributions came in even after the party was over.