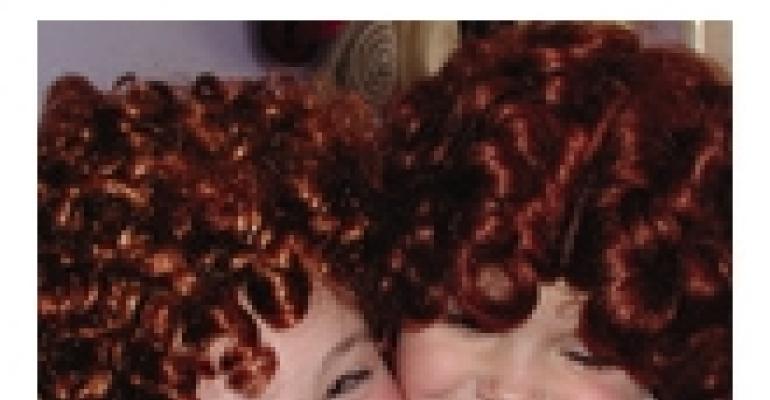 THEY may not be paying customers, but make no mistake — event pros' own children are nothing less than VIP clients. Their unique personalities and tastes — combined with their elders' expertise — make for some of the most memorable children's parties to grace the pages of Special Events Magazine.

The mother of five-year-old Katiebug, Laurie Saunders of Charlotte, N.C.-based Celebrate! Event Group has been throwing no-holds-barred birthday bashes for her daughter since age one. But none of those annual parties stands out more in Saunders' memory than the “Little Orphan Annie” themed soiree she planned for Katiebug's third.

An adopted child, Katiebug “seems to have a fascination with fictional characters who are either orphans who are adopted, or children who aren't living with their parents,” Saunders says. The impish Annie character caught the little girl's attention when she was given a video of the hit Broadway musical “Annie” in 2003. Noting her daughter's devotion, Saunders created an Annie extravaganza for 14 special guests in the private event room of La Tea Da — a Charlotte restaurant owned by ISES Charlotte Chapter board member Janet Woodson.

Surprises included a performance of “Tomorrow” — a song from the musical — by a young actress who had played the lead role in a local production of the show. On hand to enjoy the festivities were Katiebug's biological family, who travel from Texas each year to celebrate the occasion, and a gaggle of the guest of honor's girlfriends, each of whom received a limited edition Annie china dish, an Annie lapel pin and a 6-inch Annie doll.

On the topic of sourcing Annie items — a tricky task, as the musical premiered almost 30 years ago — Saunders says that online auction house EBay was a “great resource.” Sourcing hard-to-find memorabilia on the site also satisfied the event planner's sentimental side: “I have the most fun finding favors for our guests that are different from candy and plastic toys. I want them to know how much we love them and want them to have as much fun as the birthday girl. I'd rather spend money on memory-makers than disposable favors.”

Pink compacts outfitted with pearlized paper inserts and personalized with rhinestone initials served as invitations, setting the tone for the beauty-themed event. Once the lucky invitees arrived, they found themselves in a home transformed into a spa/salon, complete with stations for manicures, pedicures and hair styling.

To contend with the event's biggest challenge — “Little girls have an attention span that can easily be diverted,” Triplett notes — the event pro drew upon her management skills. To help keep the guests entertained while waiting for their beauty treatments, Triplett set up craft stations where the young spa-goers could customize rubber flip-flop sandals with flowers, glitter, rhinestones and other baubles, or try their hand at making bath salts using a bounty of essential oils.

Of course, the best spa days include take-home treats, and Triplett's event was no exception. “To cap off the fabulous time, we staged a ‘paparazzi frenzy’ where we snapped dozens of pictures of the girls with their new glamorous looks,” she says. “Each girl received one of her pictures in a star-shaped frame.”

With 40 percent of her company's business devoted to children's events, including bar/bat mitzvahs, birthday parties and sweet 16s, Lissa Davis, of Northridge, Calif.-based 4Divas and a Dude, is no stranger to kid stuff. But when it came to coming up with a theme for her own daughter's fourth birthday party, the producer says initially, “I was clueless.”

Not for long, though. Realizing that preschoolers have a limited frame of reference but unlimited energy, Davis kept it simple, making “art” her theme and “paint” her color scheme.

Paint, smocks, easels and canvases set the scene, while paint from an art-supply store and a professional art teacher made it possible for the young guests “to paint something their parents would want to hang in the house,” Davis says. As for color, it was everywhere, from specialty tie-dyed balloons to decorated paint cans, to tote party favors and paintings back home. Even the party's kid-friendly meal of burgers, hot dogs, grilled chicken breasts and fries was presented artfully: “The key was you had to use a paintbrush to put on your condiments,” the planner notes.

Interactive entertainers including a ballet troupe that danced with colorful fabric and a face-painting clown further helped ensure a party that would keep kids at a distractible age busy. “The children at my daughter's party didn't want to go home — the party lasted well over three hours,” Davis says.

Involving her daughter Whitney “from beginning to end” in the creative planning process, wedding consultant Daisy Pagan of Columbia, Pa.-based Perfect Settings set out to give the teenager an unforgettable quinceanera — the Latin coming-of-age celebration for 15-year-old girls.

“I had to keep reminding myself that although I didn't have the quince I wanted at 15, this was Whitney's quince,” Pagan says. “I wanted her color scheme to be ruby red — she was adamant she wanted blue.” So blue it was — specifically navy, with silver accents, all part of a shimmering stars-and-moons motif loosely derived from a “star is born” theme that spoke to Whitney's stage aspirations.

And while having the event's DJ liven up dinner by playing a track of Whitney singing “Somewhere Over the Rainbow” at age four might have been a tad mortifying, ultimately the teenager “thought it was hilarious,” Pagan says. A more refined recording — this one of a 10-year-old, professionally trained Whitney singing the religious hymn “Come Just as You Are” — announced the guest of honor's entrance to the church where the ceremony was held.

In another submission to her “very particular” daughter's tastes, Pagan provided 15 different cheesecakes instead of the traditional quinceanera cake. While the event expert admits to being disappointed with the dessert choice — “I wanted to make a cake for her,” Pagan says — she recognizes it was all part of personalizing her daughter's event. “In 10 years Whitney isn't going to remember a birthday cake that I made,” Pagan says. “But she will remember that she had cheesecake, which is her favorite.”

Like Pagan, Tracey Amernick was called upon to create a coming-of-age fête for a very special someone — in this case, the bat mitzvah celebration of Amernick's “one and only niece,” Meredith.

Directed by Meredith's mother — Amernick's sister — to put together a party “that Meredith's guests would refer to as ‘off the charts,’” the catering director for San Diego's Bahia Resort Hotel used as her design scheme Meredith's “Amazing Kaleidoscope of Colors” theme.

At event site the One World Theatre in Austin, Texas, cocktail hour got a wash of color from neon spandex linen, cirque-themed backdrops and an ice martini luge offering festive Cosmopolitans, Apple-tinis and Mango-tinis. Colored-glass votive holders and ottomans in plum and raspberry hues added glimmer and glamour, while a reception menu from Baltimore-based Chef's Expressions, including blanched asparagus with lemon custard, marjoram-laced carrot shoestrings and giant red strawberries, brought a bright palette to eager palates.

At the dinner afterward, the guest of honor's table “was a symphony of colors, draped in apple green with bright orange and hot pink place mats, multicolored crystal napkin rings and orange ribbon streamers hanging from above,” Amernick notes.

Of course, it was nice to see the young guests' faces light up at the custom soda bar, Mad Hatter cake and Candyland sundae bar, the catering director says. But best of all was watching her niece shift from typical teenage apathy to genuine enthusiasm about the planning of the event. “My sister was surprised to see her take an interest,” Amernick says. “But I have always felt that it is important to involve the child in the plans. One never knows — maybe Meredith will grow up and be a party planner like me one day!”