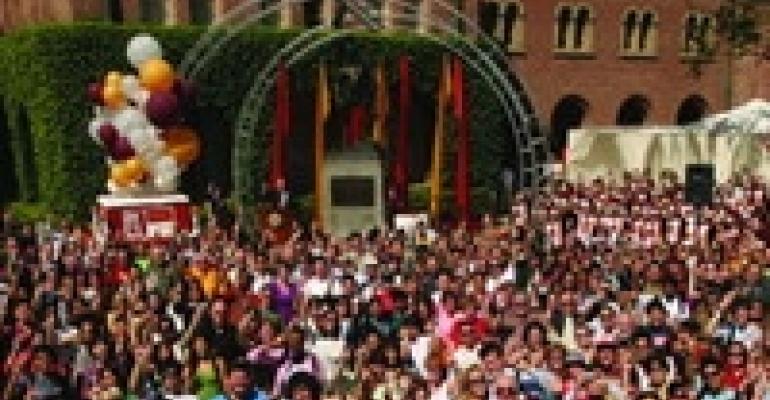 For some universities, football seems to be part of the core curriculum — yet academics remain the raison d'etre. Jim Hooker, executive director of the office of protocol and university events at Los Angeles-based University of Southern California, offers an explanation for the frenzy caused by football. “USC may encourage multidisciplinary education, but football creates a visceral connection that is vital to our tradition of success,” he says. Read on to discover how schools gather guests for football events during the best and worst of seasons.

“Nebraskans are not used to losing,” says Annette Wetzel, director of the visitors center and special events for the University of Nebraska-Lincoln. But a recent losing streak for the Cornhuskers hasn't affected at-tendance at football functions, such as the university's tailgate parties, chancellor's pre-game party, and band pre-game concert with the traditional walk to the stadium. “Maybe misery loves company!” Wetzel jokes.

Luckily, local traditions resonate with alumni no matter the ranking of the football team. UNL's popular on-campus dairy store provides ice cream and toppings at many events, and the school keeps events wholesome for families by offering mocktails. A recently reinstated tradition dates back to the days when famed TV host Johnny Carson attended the school. The university brought back its home-coming parade and mum corsages for the ladies — just like the ones worn in the '50s — to celebrate the dedication of the Johnny Carson School of Theatre and Film in October.

Another new tradition involves non-UNL fans. Last year the university invited fans of competitor University of Texas at Austin to a joint pre-game party. UNL's chancellor greeted guests at the door, and both schools' pep bands played. The event was such a success, the two schools celebrated together again when UNL played in Texas.

The University of Michigan at Ann Arbor ties class reunions to football season. Not only did the school host a 50th reunion weekend for the class of 1957, but also a “Recent Graduate Reunion” in September for classes 2001-07. At the reunions a tailgate precedes the game, and a dinner and dancing gala follow it. Both old and young Wolverines are eager to support the football team: Attendance at the tailgates has increased by 100 percent over the past 10 years — tailgates averaged 300 guests in 1996 and now average 600 guests.

The UM event team overcame obstacles big and small to pull off the fan-friendly “Michigan Difference Weekend” tailgate in October. “With unpredictable fall weather and guests of all ages — some in their 90s — it was important to use an indoor venue that was also close to the football stadium,” says Michelle Pate, director of the office of university and development events. So the 1,300-guest tailgate took place in basketball venue Crisler arena. A party of that size meant outsourcing for the event team, and lots of it — “catering, audiovisual, equipment, decor, rentals, even bathrooms!” Pate says.

There's nothing wrong with an embarrassment of riches. Enthusiastic alums clamor to participate in events for USC, due in no small part to a recent winning streak that includes two national football championships and several Pac-10 championships. Despite the football team's success, Hooker has his eye on the long-term. “We all know that this sort of success can't continue indefinitely,” he notes. “It is important to us to build parties that will continue to thrive as successfully during the downtimes as during the uptimes.” So to maintain the quality of the events, the university had to cap the number of guests for one event and even cut the number of attendees for another. The popular university picnics can range from a 300-guest dress-code event hosted by the president to a 2,200-guest event hosted by the USC Athletics Department. An added touch at the university's four-day 125th anniversary event in October 2005 was a historical retrospective tent, which told the story of USC's past and its direction for the future.

For all university events, Hooker advises crafting a consistent message — and musical accompaniment never hurts. In USC's case, Hooker says, that message is “USC is a world-class research university, and your continued support is paramount to our continued success.” He adds, “A guest may never hear these actual words, but that is the underlying message of each and every event. However, you can often count on the Trojan Marching Band making an appearance right at the end — there can be no bigger exclamation point for many of our events, academic or athletic.”