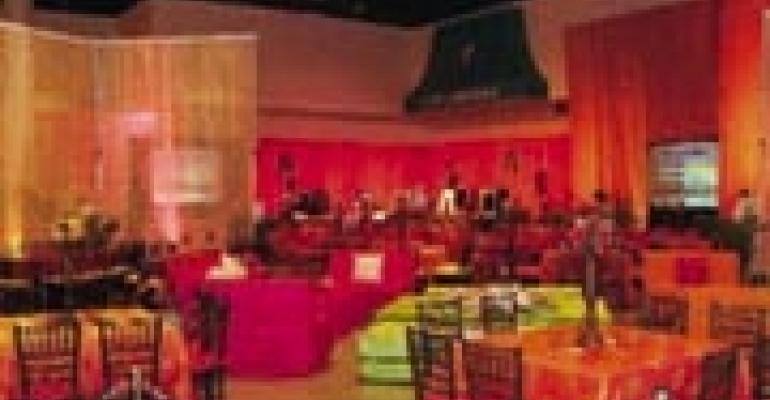 CAUTIOUS CORPORATIONS, AGING philanthropists and a host of new charitable causes add up to challenging times even for established fund-raising events. That's where event pros come in, bringing with them bold concepts for design, operations and marketing, all in the service of aiding those in need.

Getting the word out about hunger in America is a cause close to the heart of Kelly Murphy. “It's a natural for me, because of my background in restaurants and my part of the event industry,” says the co-owner of Pompano Beach, Fla.-Based Panache Party Rentals. For the past 12 years she's been spreading the word and raising money to help fight the problem through her work with Washington-based Share Our Strength.

As chair of her local Taste of the Nation event — part of a network of more than 100 Taste events nationwide — Murphy coordinates more than 50 participating restaurants and 100 wine suppliers. And she draws on her industry experience to enhance the event's appeal and increase dollars raised from year to year.

This year, she added a gourmet marketplace to what is essentially a “grazing” event, giving sellers a chance to market to a desirable demographic while breaking up the pattern of eating and drinking for guests. “People got to stop for a minute and look at other things,” Murphy says. “It was really cool.”

She also took a risk by insisting that entertainment continue, in another part of the event space, during the live auction — a break from years past when entertainment shut down, driving all attendees into the auction area. “Not everybody has the ability or desire to participate in the auction,” she says. By giving those who don't want to be involved a chance to do something else — dance, listen to music, eat a bit more — bidders had more space to gather, and were able to focus on auction items. The result: “We had our best auction ever,” Murphy says, “because the people who really wanted to be there were there.”

EYES ON THE PRIZE

Food also features prominently at Dining by Design, the Design Industry Foundation Fighting AIDS' annual regional event. But Tony Conway, CMP, of Atlanta's A Legendary Event notes that the crowd comes to be wowed by the scene — in this case between 45 and 55 tables, each conceptualized by celebrated minds in the areas of interiors, floral and retail presentation.

In his six years as a coordinator and sponsor of Atlanta's DIFFA extravaganza, Conway has played a part in turning a logistical component — the pre-meal turnover of tables — into a guest highlight. After the evening's table-viewing reception, Conway's crew has less than 15 minutes to remove all of the designer tabletop items, pack them, store them and reset tables for the event's plated dinner. “In the past three years, guests have started to want to watch it — it's such an amazing feat,” he says. Now, with a little finesse and focus on crowd control, “the change-out of over a million dollars' worth of crystal, china and silverware in 12 to 15 minutes has become the biggest ‘wow’ of the event.”

Conway says the live-action transformation, along with the addition of a new, night-before cocktail and table-viewing reception for younger guests, has helped Dining by Design generate buzz and bring in new donors. That's critical business during a time when “AIDS contributions have really dropped due to the help of the drugs that are now available for keeping those affected and infected living longer,” he adds.

Attracting a whole new audience, as well as raising the prestige of Chicago's 104-year-old Off the Street Club holiday luncheon, were the objectives of the city's Red Chicago Marketing Solutions. As corporate communications provider for Ogilvy & Mather, Chicago — this year's host of what has traditionally been a pet project of the advertising industry — Red Chicago was assigned the task of reaching beyond the advertising world into a completely different donor demographic.

With the event struggling for cachet in past years (“It was a luncheon where a lot of agencies would send interns and lower level employees,” says communications specialist Tammy Kotula), Red Chicago aimed to target CEOs outside of the agency community — “people who could write bigger checks,” she adds.

Securing former New York mayor Rudolph Giuliani as keynote speaker was the crew's first coup. Snagging a high-stakes raffle prize — a sleek Mercedes-Benz sport coupe — was another. Giuliani's participation allowed Red Chicago to promote a pre-event VIP reception where attendees were guaranteed a private audience with the much-admired Giuliani. Meanwhile, Red Chicago priced raffle tickets for the Benz at $100 apiece and made them available to the public. That enabled the company to rid the event of past years' “little raffles — three tickets for $10, things like that,” Kotula says. “It helped eliminate all that extra management, and helped boost the prestige of the event as well.”

In the end, with the aid of a marketing campaign that included magazine ads as well as postcards handed out on tony Michigan Avenue, the event brought in bigwigs from McDonalds, Sarah Lee and other major corporations, according to Kotula. And, most importantly, it broke past fund-raising records, giving a significant boost to beneficiary OTSC, a provider of after-school activities for poor children in Chicago's inner city.

For one event in the fund-raising capital of the United States — the New York Public Library's 17-year-old Young Lions benefit — new ideas come naturally from year to year. That's because the event, which bases each year's theme on an item from the library's collection, has a treasure trove of inspiration on which to draw. Still, says NYPL director of special events Kathryn Laino, it's all about adapting the theme to appeal to the Young Lions crowd, made up almost exclusively of 20- to 39-year-olds.

This year's event, for instance, took its cues from the library's Truman Capote papers, rethinking Capote's famed 1965 Black and White Ball. Fortunately, Laino says, '60s elements are “all coming back now.” As a result, '60s hors d'oeuvre such as cheese puffs and pigs-in-blankets had retro relevance with the young guests — a crucial demographic in the library's long-term donor outlook. Meanwhile, high-tech screens showing off shots of Capote's original bash, and “cutting-edge, clubby kind of sound” from the event's DJ grounded the gala in the present.

Keeping the fund-raisers he designs true to the times is equally important for Matthew David Hopkins of New York's Matthew David Events. “The biggest thing we can do to help keep things fresh is to respond to what's going on in the world,” he says. “We make each event feel appropriate to now.”

In recent years he's applied this approach to the Central Park Conservancy's annual Halloween Ball. A few years ago, when “the mood in the country was low-key,” he says, “instead of making it a scary Halloween ball, we called it ‘Raise Your Spirits.’ We had fortunetelling and things like that, as opposed to something like a graveyard theme.” For this year's Halloween bash, though he's hush-hush on details, he says he'll again turn to the mood of the nation for design inspiration.

Whatever he does, Hopkins says, he won't change his signature element: “We always create a ‘star of the show’ for decor — whether it's an incredible custom chandelier made out of Halloween masks or a numeral 25 made out of red roses.” He adds, “That's our job — hitting the right notes, setting the bar for making the event worth a higher ticket price.”

“All of a sudden you have the advent of ‘bling-bling.’ Every fund-raiser wants the hot young stars — the Beyonces, the Damon Dashes, the P. Diddys. It's a much more mixed, ethnically diverse group of people than in the past.”

“This weekend I was at a party for which I paid $1,000, which I think is more than enough for normal people to pay to be at a party. And basically it was a corporate drama-and-trauma. All the brand-new Rolls Royces and Cartier watches and fine jewelry — the ‘luxury presentations.’ I don't mind people doing that to me when I'm not paying, because that's the agreement. But when you do pay, you don't want to walk into a corporate showroom. But it's happening more and more, because corporations are not willing to play Di Medici anymore — they want their presence felt.”

“I just met with some friends through two charities I've known for a very long time. They told me their average donors are 70 to 80 years old. They've got a ton of money, but they're dying out. Unless you're starting to capture the 22-year-old who wants to be nice and social and spread around a little bit of money, you're going to fail.”