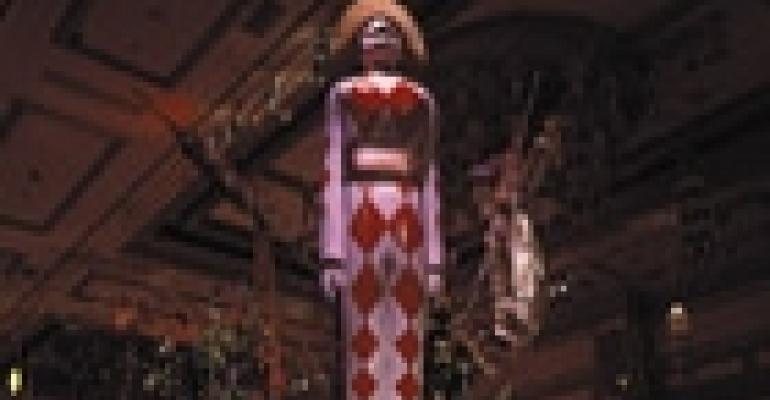 How do you impress the guest who is used to the best? Event producer Cheryl Fish answered that question with the Commedia dell'Arte Festival she designed as the welcome reception for the Bass Hotels & Resorts Global Investors Conference at the Bellagio hotel in Las Vegas. As vice president of MGM Mirage Events — which produces events for several MGM properties — Fish has been at the helm of many corporate events. But the 1999 Bass reception posed a daunting challenge: Knock the socks off 2,500 international hoteliers who are accustomed to premiere venues and exceptional events.

Fish wanted to produce a one-of-a-kind event while staying true to the atmosphere of Bellagio, which, she says, “has an Italianesque feel to it — it's Old World, very elegant, not the typical glitzy Las Vegas hotel.”

After extensive research and several discussions with John Schingler, at the time Bass vice president and organizer of the conference for more than 20 years, Fish came up with the idea of the Renaissance-era Commedia dell'Arte, an Italian comedy form involving colorfully masked characters and spirited acrobatics. According to Fish, the highly improvisational Commedia was a perfect theme for the reception, which the client wanted to be social, interactive and opulent.

Every one of the event's many props — including 10-foot-tall harlequin figures, massive marionettes and a Casino de Bass carousel — were designed and built in house by members of MGM Mirage Events' staff. And while staying within Bass' $365,000 budget was a tricky task for Fish, she discovered an unexpected benefit: recyclability. “Doing this for the first time gave me the opportunity to re-sell it to many other clients,” Fish says. She has since re-dressed props originally designed for Bass and used them at receptions for performances of Cirque du Soleil's “O,” staged at Bellagio. “The beauty of this profession is being able to create something magical and then use it again.”

On the evening of the reception, with Fish's larger-than-life Italian court jesters standing sentry at the entrance to Bellagio's Grand Ballroom, conference guests entered a space filled with welcome banners, elegant red and gold decor and strolling mandolin players. Guests were free to move between the ballroom and Bellagio's large patio, where tarantella dancers performed and “vino maidens” in peasant costumes enticed conference attendees to drink shots of Chianti poured from bottles hanging from the maidens' belts.

Bellagio catering director Tom Cook contributed to the energetic, interactive quality of the event with multiple buffet stations featuring an eclectic range of international foods. Cook, who likes to “work with islands, so you're in among the food stations and in among the decor,” says he enjoyed fulfilling Bass' request for a “walking dinner.” He designed the reception's buffets, topped by hand-carved harlequins and Punchinello dolls, to be elements of entertainment, in the same vein as the event's gaming tables, Gypsy fortunetellers and Renaissance-era street vendors.

Despite the flurry of activity at the reception, the event went smoothly from preparation to execution, according to Fish. She credits MGM Mirage Events and Bellagio in-house staff for the success of the event — just one of seven Bass events Fish and her team produced over the course of the five-day conference.

Both Fish and Cook also note the benefit of hosting an event preview — a step they took about a month prior to the conference to ensure client satisfaction and give themselves a chance to stage a valuable dress rehearsal. The pre-event event was complete with full menus, props, decor, lighting and entertainment. Cook, who worked with Fish to coordinate the pre-event event, recalls their client's response to the preview. According to Cook, Schingler “said, with his charming English accent, ‘By God, I think you've nailed it!’” And, apparently, the MGM Mirage/Bellagio team had. Bass arranged for MGM Mirage to produce its conference again the following year, and Schingler wrote to Fish: “Every event of the conference was superb, in fact, outstanding.”