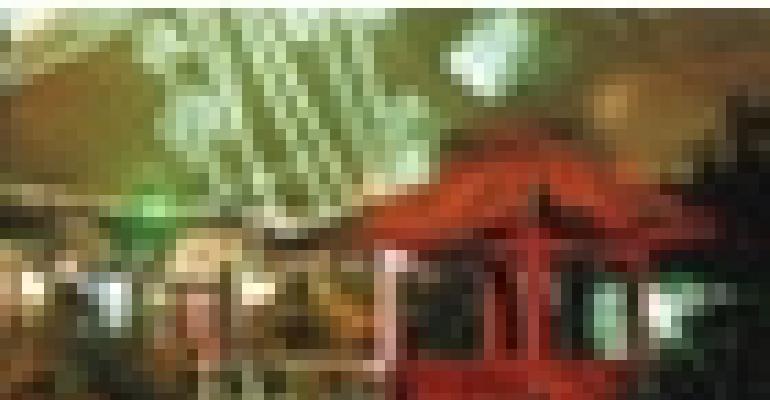 EVERY YEAR, Los Angeles-based Herbalife International holds an incentive contest for its international salespeople. The reward for the winners has been an invitation to an exclusive party in February at the owner's residence in Beverly Hills, Calif. The 2000 event needed to be more special as it also served as the company's 20th anniversary celebration.

Herbalife called on Los Angeles-based Good Gracious! Events to produce, coordinate and cater the five events that would take place over a week. The client wanted to bring the gardens of the world to Southern California, event producer Penny Kauth says.

The grandest event took place on the first floor of the residence and in four distinct tented sculpture gardens on the propertyMidsummer Night, Asian, Renaissance and Roman. Kauth and executive producer Pauline Parry joined forces with Los Angeles-based Extraordinaire Floral and Event Design to provide decor and design services and with Abbey Event Services of Burbank, Calif., to install 25,000 square feet of tenting on two levels, including a long staircase, to house the 1,500 guests.

The Midsummer Night-themed tent in front of the house served as the entrance to the party. The focal point of the 140-by-40-foot tent was the existing fountain in the middle of the dance floor. To make the fountain part of the decor, Extraordinaire built a canopy of gnarled wood and iron wrapped in vines and twinkle lights, company owner Ronald Mann says.

Burbank-based Fortune Entertainment provided roving entertainers such as Charlie Chaplin look-alikes and jugglers to keep guests dispersed throughout the venuea requirement from the local fire marshal.

Inside the Asian garden tent, guests walked over a custom-built, 60-foot redwood bridge complete with Japanese teahouse over a koi-filled pond (actually the homeowner's pool). We had to drain the pool and build scaffolding for the bridge, Kauth says.

Good Gracious turned the property's back terrace into the Renaissance-themed garden tent filled with rosebushes and other live plants. Full moon and moving cloud gobos enhanced the walls and ceilings of the 65-by-30-foot canopy. Recordings of cricket and bird sounds resonated in the garden.

From the terrace, 67 steps led guests down to the lower level and into the formal Roman garden tent, filled with faux marble columns and live statues. Inside the 130-by-30-foot clear tent, hedges and yellow forsythia blooming out of 8-foot urns lined the garden path.

When the client told Good Gracious there was only a 24-hour window to install everything on the owner's property, it became clear that it would be logistically impossible because the install would take 12 days, Kauth says. Instead, the event team let the preparations become part of the buildup to the big event. As guests were bused in from nearby hotels to attend three smaller events that led up to the big night, they could come in, take a look around and see what goes into setting up an event of this caliber, she adds. They got a kick to see it come together over consecutive days.

Good Gracious and Extraordinaire had many obstacles during setup. It rained every day, Kauth says. Everyone was working in rain suits; we were up to our ankles in mud. To shield the stairs to the lower-level tent, Abbey custom-made an awning to prevent guests from getting soaked.

Bad weather wasn't the only hurdle. Good Gracious discovered it had to get numerous permits to host the event, reportedly the largest private event ever held in Beverly Hills. Each division of the Beverly Hills city government, 15 in all, was represented on a committee formed just for the event. We had to get special permits so trucks could park on the street, Kauth says.

The hard work paid off: The event earned Good Gracious a 2000 Gala Award for the best event produced for a corporation or association, budget above $500,000, during The Special Event in January.