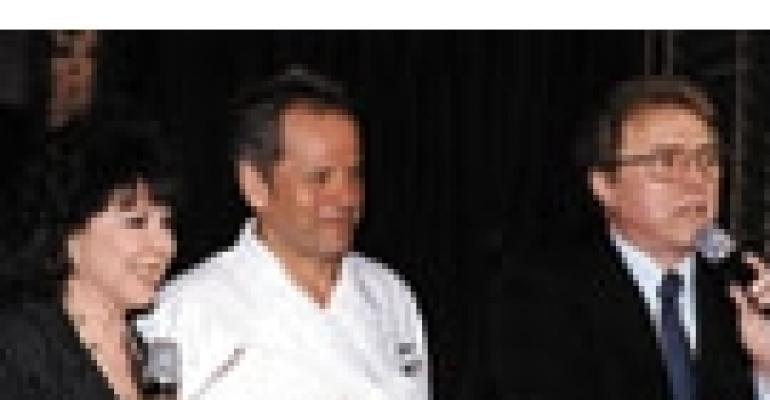 Galas: A Night to Remember

“With so many charity events here in Las Vegas,” Gora says, “we always want to make sure this is the latest, greatest, most over-the-top event.” She adds that creating a memorable event is particularly important because most of the dinner's 300 invited guests — some of the city's most prominent businesspeople, entertainers, and casino and hotel owners — are invited to the same benefits year after year.

Starting 10 months out, Gora worked with the Puck group, MGM/Mirage Events vice president Cheryl Fish, Southern Wines and Spirits of Nevada senior managing director Larry Ruvo, Bellagio president Bobby Baldwin and his wife, Donna, and other organizers to flesh out plans for the May 16 event — a seated dinner and auction with a “hip lounge” motif.

One aspect that organizers didn't have to focus on, according to Gora, was raising and shelling out funds for the event. “Everything is donated for this event, so there's not really any money going out,” she says, noting food contributions by Puck, beverage contributions by Ruvo, and event design and management by MGM/Mirage.

Though setup in the Venetian's crowded St. Mark's Square, where Postrio is located, posed some logistical hurdles, Gora's team wasn't timid about getting its work done. She says her staff took over a portion of the square while hotel guests continued bustling around the area. Fish adds that her team faced the challenge of turning an “enormous patio into an intimate loungette in front of Postrio,” which it did by erecting a truss and dressing the area with specialty panels and decor.

As guests arrived, they were welcomed into a “swanky lounge scene,” Gora says. Decor included red and orange fabric walls, animal-print bunting and life-size statues decked out in brightly colored wings. While enjoying the antics of catsuit-clad dancers and savoring passed hors d'oeuvre and Dom Perignon, attendees had a chance to check out displays of silent auction items. An hour later, guests moved into Postrio, where they were welcomed by Bellagio president Bobby Baldwin, who introduced celebrities Angie Dickinson, Paul Anka, Robin Leach, Steve Lawrence and Eydie Gorme as well as Dr. Leon Thal, a noted Alzheimer's researcher.

After a dinner of spring pea agnolotti with summer truffles, seared Florida red snapper and roasted rack of lamb “Chinois,” a live auction — “always the guests' favorite,” Gora says — raised proceeds to benefit the Las Vegas Alzheimer's Association and other Alzheimer's research institutions. The evening's most moving moment, she adds, was when Paul Anka sang a rendition of “My Way” for which he wrote special lyrics with an Alzheimer's theme.

According to Gora, five years of working together on this event has resulted in a great dynamic among organizers and a smooth setup process. “There are so many talented teams involved, any small hiccups we encounter are zapped in a heartbeat,” she says.

She notes that unique live-auction items — including a chance to be Andre Agassi's guest at the U.S. Open quarterfinals and a trip to Paris for a Chanel fashion show — add to the excitement and help get guests into the spirit of giving.

Donna Baldwin, co-chair of this year's event and a regular attendee at high-profile charity benefits in the city, points out another key to the event's success: brevity. “People just want to get to a [charity] event, eat and go,” she says. “They know why they're there.” While the Alzheimer's Benefit has grown from an after-work reception into a full-scale dinner event, Baldwin says, it has retained its focus on raising money, showing guests a good time and letting them get back to their lives.

She adds that plans for next year's Alzheimer's Benefit may include moving to Puck's new and more spacious restaurant Cili (at Bali Hai Golf Club in Las Vegas), and hiring a headline act to provide entertainment. But, Baldwin reflects, “I don't know … sometimes I think simplicity is better.”

Turn to page 63 for a list of resources for this event.