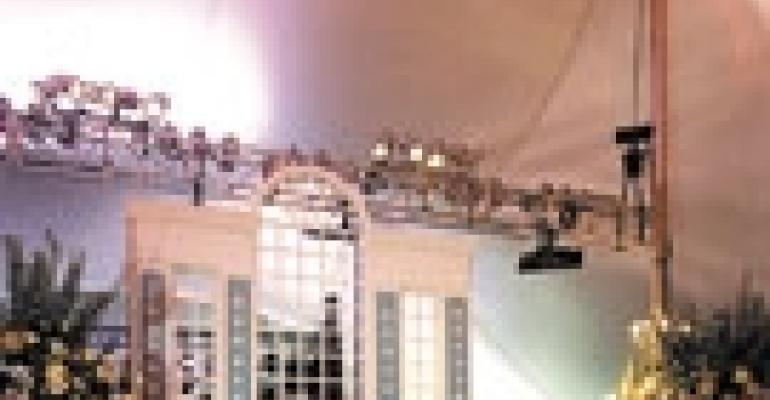 Sandy Ziegler knew that reproducing the feel of George Washington's residence inside a tent would not be an easy task, but when client General Motors called on her decor talents, she rose to the challenge.

The president of Nashville, Tenn.-based Zeigler & Co. was originally introduced to GM's Toronto-based production company Maritz Canada by DMC Destination Nashville, based in Goodlettsville, Tenn., which coordinated the awards gala at the site of Washington's Alexandria, Va., home. With a mere two weeks of preparation time, Zeigler created unique ways to emulate Mount Vernon's dining quarters inside a tent standing just yards away from the original.

From the outset, Zeigler says, she understood that “a replication of a Mount Vernon room inside a tent would have been unsuccessful and unconvincing.” Instead, she had to create a “stylized” Mount Vernon “encompassing the grandeur and hospitality of the mansion.”

Armed with a handful of renderings and a sharp eye for detail, Zeigler concentrated on the warm colors and distinctive shapes that characterize Mount Vernon's interiors. In addition to the residence's Prussian blue walls, “the most obvious things were the Palladian windows [and] the Chippendale furniture,” she says. Working with her crew of 14 artists, carpenters and technicians, Zeigler incorporated these elements into the overall decor scheme.

She recounts how her team built reproductions of the residence's regal arched windows, which then had to be set into the sides of the 180-by-65-foot tent. Staff members built columns and urns to support “massive arrangements of salmon and yellow roses” — prominent colors in Mount Vernon's draperies and carpets. They painted flats to mimic designs by French wallpaper companies from Washington's era, and installed them to make the tent sides look like solid walls. According to Zeigler, “No detail was overlooked to transform a tent of plain white plastic into an elegant dining room that would please even hostess Martha Washington.”

While large installations and props were important to the event's decor scheme, Zeigler says that small design details were essential to the Mount Vernon theme. She points to the tent's dance floor, which her crew hand painted in the pattern of a hooked rug found in Washington's drawing room. She had 20 muslin-covered wingback chairs custom-made for the event, then placed them throughout the room. Additionally, she says, “conversation areas” accented by wrought-iron banquette seating and trellis-style garden chairs “further communicated casual Southern elegance.”

Among her favorite details, she says, were the event's centerpieces, which ranged from Chinese porcelain bowls to silver julep cups, filled with alternating arrangements of roses and lilies. “The caterer went to a lot of trouble to get china and flatware and glassware to be of the period,” she says, crediting Washington-based Design Cuisine for enhancing the authenticity of the tables.

On the evening of the event, as a “flourish of trumpets” took guests from their outdoor cocktail reception into the tent, Zeigler's decor work paid off, says Maritz Canada executive producer Roman Demchyshyn. In an authentic colonial environment, guests enjoyed American music from fife-and-drums to doo-wop, as well as nonstop dining and celebration. “They danced until one in the morning, then we shipped them by coach back to the hotel,” Demchyshyn says. And it wasn't just the client group that was impressed, he explains. “We have a letter that comes from [Mount Vernon's] council of regents that says they have never had a finer event that's ever been done at Mount Vernon. That's pretty high praise coming from [the capital region], where they say ‘We've done it all.’”

Destination Nashville's Carol Northley admits that she had her own doubts before the event. “Immediately when you say ‘tent,’ your heart kind of sinks,” she says. “You think, ‘We've got tent poles and we've got sidewalls and we've grass on the ground.’” Her group's goal was to show, “‘no, you're having a party in George Washington's dining room — we've just made it bigger to accommodate all 700 guests.’” The board's praise assured her that she and her design and production partners had accomplished their objectives.

Weighing in with client GM's appreciation, supplier relations manager Judy Sullivan wrote to Destination Nashville: “I cannot tell you how many letters, e-mails and voice mails I have received from attendees saying how much they enjoyed the event and how great it was — there have never been so many.”

Salad Bouquet of Fresh Mesclun With Nasturtiums and Chive Straws