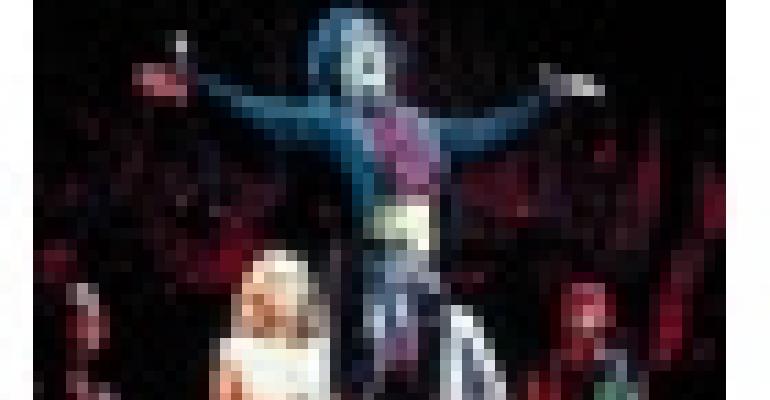 Special events aren't real life; they're better. To create unforgettable experiences, event designers often turn to show business for that dash of theatricality. This month, we interviewed David Johnson, editor of Entertainment Design magazine, which, like Special Events Magazine, is produced by Intertec Publishing, to see what design trends are making news on Broadway and beyond.

Special Events Magazine: What shows are setting trends now with their great designs?

David Johnson: The Rocky Horror Show revival has great design work. The designer is David Rockwell, who usually does themed environments. It's way over the top, very campy, with lots of red and crimson. The lighting, by Paul Gallo, is almost like being in a nightclub. There are lots of moving lights, intelligent lighting.

Outside of the mainstream, a couple of trends were really hitting their peak in the last year.

The Blue Man Group received an award from Entertainment Design. They use everything from Jell-O that flies into the audience to Cap'n Crunch cereal. They also use Live Wire [electroluminescent fiber wire] very creatively. They put it on people, outlining them.

The De La Guarda Argentinean group opened a show in New York City that is basically just a bunch of acrobats dropping water and toys onto the audience. They just opened in Las Vegas as well. There's a trend toward events that are pretty much all aerial, using a variety of harnesses.

Q: Is that an outgrowth of Cirque du Soleil's emphasis on acrobats?

A: They started a lot of it. The mix of circus and downtown performance art is perfect for [venues in] Orlando [Fla.] and Las Vegas. It's spectacular and fun. It doesn't require a lot of thinking! And it fits many audiences.

They tried to do a [staging of the musical] Chicago in Las Vegas, but it didn't run very long. Instead, you are seeing a lot of event shows that get people into seats.

Q: What technologies are popular now?

A: The most interesting stuff is the rise of audio and visual projection in performances. Obviously, they have always been important to everything from corporate events to houses of worship. But now, The Rocky Horror Show has some really important video projections in it. In one scene early on, there is a video of the couple in front of a church. They walk toward the edge of the screen, then the couple comes out from behind the screen.

Audio is always a sticky point in theater; it's the whole issue of natural sound. But the rise of spectacles and rock musicals requiring some sort of amplification has necessitated a move in that direction. There is a lot of talented sound direction out there that is not always getting their due.

Q: What design trends are on the way out?

A: The huge stage musical is on its way out. [Producer] Cameron Mackintosh [Cats, Miss Saigon] has said he will do no more new ones. The days of The Phantom of the Opera are behind us. The Full Monty is a very big hitvery well-done, lots of fun. It's sort of a small musical without a lot of design elements. But it's completely well-done; the costumes are fantastic.

So we see a lot of scaling back from spectacle but a lot of innovation with sound and video.

Entertainment Design magazine can be reached on the Internet at www.etecnyc.net.