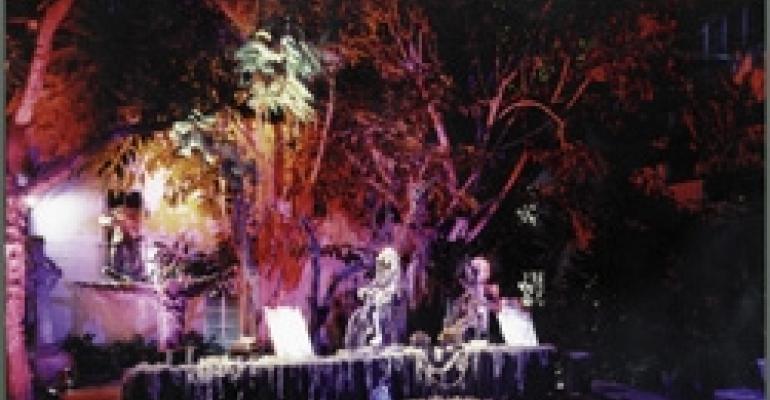 Halloween is not just for kids anymore, event planners say. One third of respondents to an informal poll from Special Events Magazine say they have seen an increase in Halloween-themed parties in the last five years for both corporate and social clients. Those who have seen a boost say business is up anywhere from 10 percent to 100 percent.

Portland, Ore.-based Bruce Goldberg &Co. (www.bgcevents.com) has seen corporate Halloween events jump 50 percent and social Halloween events 100 percent in the last five years, says company founder Bruce Goldberg. The parties are a hit with both groups, he says, because the costuming makes the event “far more interactive” for guests. “The guests feel more involved with the success of the event because they—and their costumes—play an important role,” he explains.

Halloween parties do well with corporate groups not only because many people like dressing up, but the holiday itself has the aura of exclusivity. “Unlike Christmas and the holidays where people celebrate for a whole month, Halloween really only works if the corporate client’s meeting falls on or a day or two before,” says Janet Elkins, head of EventWorks in Los Angeles (www.eventworks.com). “So that makes a Halloween-themed event more of a unique event.” Elkins and her team have created haunted mansion venues using live characters dressed as ghosts, along with projections of everything from spooky vampires to charming Casper the Friendly Ghost. She has also created graveyards in ballrooms using dead trees, dilapidated shutters and chandeliers coated with cobwebs.

What corporate groups like Halloween parties? It runs the gamut from sales to techies, planners say. But most say the appeal skewers to the younger set, and some say smaller companies get into the spirit better than larger ones. “Larger companies tend to have a larger pool of foreign born employees who, supposedly, don’t have the same appreciation for the holiday as their American-born counterparts,” Goldberg says.

Corporate branding can still be part of the fun. Laurie Sharp, CMP, of Sharp Events in San Francisco (www.sharpevents.com) has brought in an expert pumpkin carver (“Yes, there are such things!” she says), who carves 100-pound-plus pumpkins into corporate logos.

At press time, New York-based Matthew David Events (www.matthewdavidevents.com) is at work on a Halloween ball for the Central Park Conservancy combining Halloween with fashion--“a fabulous fusion between ghoulish and glamour,” notes marketing director Jason Lord. Centerpieces will include a black cat made of black sequins and fur boas nestled in a pumpkin patch as well as a skeleton’s arm—draped in gems and holding a martini glass—bursting out of the tabletop.

“While the frequency of Halloween and costume balls has remained somewhat consistent, it’s more notable that the extent to which people get involved has definitely risen,” Lord says. “It's estimated that two-thirds of the guests at this year's Central Park Conservancy Halloween Ball will not only go all out in costume, but will also enter their annual costume competition. It's reached the point where it's strange to come out of costume.”

Along with décor, the Halloween menu provides a rich theme source.

For a private party of 50 adults and 100 children, Los Angeles-based Patina Catering (www.patinagroup.com) will offer a menu with a children’s buffet of Barbequed Bat [chicken] Wings, Anti-Vampire Spaghetti with 10 Cloves of Garlic, and Mini Pumpkins Stuffed with “Ghostbuster” Vegetables. Adults can sample Dracula’s Beet and Orange Salad with Fennel and Shaved Pecorino with Fresh Greens “from a Graveyard in Malibu,” Pumpkin and Pancetta Risotto with Chanterelle Mushrooms served in a Pumpkin, and Filet of Beef with Monster Mashed Yams and Graveyard Sauce. The dessert buffet will offer up Halloween cookies, Day of the Dead cookies, and Fall Berry Crumble with Cinnamon Spice Ice Cream, notes director of special event sales Laurence Whiting.

Cheryl Fish, vice president of MGM Mirage Events (www.mgmmirageevents.com) in Las Vegas, has a roster of spooky cocktails, many of which feature licorice straws and orange slices as garnishes. “There is a great black vodka that has black catechu herbs that taint the vodka black but don’t leave stains or have an odor,” she notes. “It works great for that Halloween-a-tini.”

One of the joys of Halloween parties, says Randy Fuhrman of Randy Fuhrman’s Creative Concept in Burbank, Calif. (www.creativeconceptusa.com), is that creativity trumps budget. “The 99-cent store is your friend,” he explains. For Halloween bashes, Fuhrman has filled punch bowls with water and floated eyeball candles. He has put glass wax on windows and written backwards “Help me, I want to get out!” For children, he puts four cinnamon candies in the bottom of a cup and fills the cup with warm cider; by the time the kids finish drinking the cider, the candies have melted into a pool of “blood.” For adults too shy to come in costume, Fuhrman creates “grandma’s attic”: a collection of wigs, hats, capes and makeup so wallflowers can get into the action.