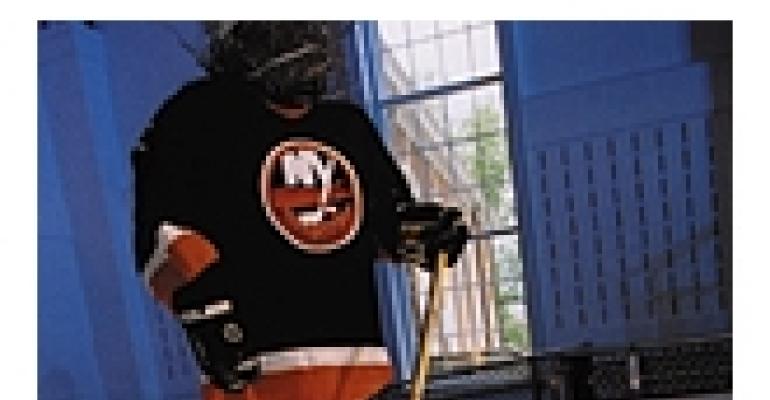 BEHOLD the sports-theme bar mitzvah, perennial favorite of coming-of-age Jewish males from Portland, Ore., to Portland, Maine. With such demand for athletic ambience on the mitzvah-party circuit, it's the enterprising professional who is able to design a sports event that looks original, feels exciting and appeals both to children and adults. Carolyn Dempsey — creator of a 2006 Gala Award-nominated hockey-theme bar mitzvah — is just that pro.

The president of Port Chester, N.Y.-based Carolyn Dempsey Design says she moved ahead with the event decor look by turning back to a popular prop.

Dempsey explains that she first introduced hockey player “mannequins” at a bar mitzvah she had designed for a previous client. Made from straw-filled hockey jerseys, the mannequins won the admiration of her new client, a close friend of the original mitzvah family.

With the approval of her previous client, Dempsey decided to use the mannequins once again. But the stuffed shirts proved to be a mixed blessing. While the designer was glad to have a firm foundation on which to build the winter bar mitzvah, she knew she would have to totally rethink the design for her new client in order to create a hot look rather than a warmed-over one. “The solution was to have the mannequins stuffed with white birch branches to complement the ‘icy’ color scheme as opposed to straw, which was used for the [first] fall-inspired event,” she says.

Updating a previous concept was just one of Dempsey's big design challenges. The other was creating a space that would win over young invitees while still scoring points with the grown-up guests.

Wherever they sat, guests were sure to enjoy a sumptuous meal prepared by Cos Cob, Conn.-based Plum Pure Foods. Meanwhile, a glowing blue plexiglass-topped service bar accented with clear glass cylinders holding white cymbidium orchids didn't just help the busy beverage servers but made for an “elegant, sophisticated” decor touch, according to Dempsey.

Dempsey says one of her most satisfying accomplishments with the event was creating a “warm yet icy environment” — a must for both ensuring the appropriate emotional tone of the occasion and fulfilling its thematic design demands.

Perhaps equally satisfying was the knowledge that budget dollars allocated for the venue would provide an added benefit. Not only did those dollars help support the much beloved club, but “all of the hockey uniforms, gear, padding, skates, sticks, helmets and banners [used in the event] were provided by the client family and later donated to the club — a gracious gesture to the community,” the designer adds.

Penne Pasta with Tomato Sauce and Basil, Chicken Fingers with a Choice of Sauce, and Cheese Quesadillas with Guacamole and Salsa Fresca