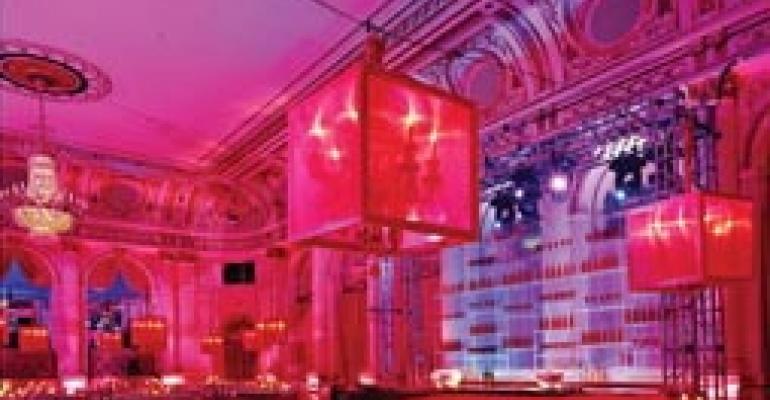 The blank canvas has its place. A plain-Jane space can be anything event planners imagine: Tuscany, Times Square or outer space. But these days, many clients want event venues with built-in style. A unique setting makes decor — and decor costs — minimal. Here's how four hotels provide alternatives to blah ballrooms.

GOLD AND WHITE AND GORGEOUS ALL OVER

As the venue for writer Truman Capote's famed 1965 Black and White Ball, the Plaza Hotel, which opened in 1907 on New York's Fifth Avenue at Central Park South, could rely on history and a chichi address for character. Instead, the iconic hotel's 4,800-square-foot Grand Ballroom underwent a multimillion dollar restoration and reopened in March. To return the ballroom to its 1929 Beaux Arts splendor, each crystal was replaced on two elaborate chandeliers, and forensic testing verified the original colors of the paint on the historic murals. Though it reopened only eight months ago, the ornate white-and-gold Grand Ballroom already has hosted more than 80,000 event-goers. Its appeal is obvious, according to Steven Rice, vice president and general manager of Central Park South Events at the Plaza: “The building is 100 years old, but it's brand-new at the same time.”

Despite its classic look, the Grand Ballroom leaves opportunities for parties to make their own decor mark. Instead of hanging a chandelier in the center ceiling position, the Plaza management left the space open so clients can use the prime spot for lighting fixtures or other enhancements that complement the decor for their event; floral chandeliers are favorites to adorn the space, Rice says. He also has seen a romantic 28-foot wall of flowers as additional decor at a wedding staged in the ballroom.

Despite its historic pedigree, the hotel has a modern approach to catering. Buffalo, N.Y.-based hospitality management group Delaware North Co. paired with New York-based catering company Great Performances to make up the stand-alone venture CPS Events at the Plaza. The food focus is on local, seasonal menus, with many items coming from Great Performances' Katchkie Farm and going from farm to table in under 48 hours. To showcase the food, CPS invited more than 300 event planners for a July “100-mile party,” which described the distance the food traveled. The classic ballroom went contemporary with tables underlit red, zero linen, candles instead of flowers and red chandeliers. “Everyone thought we were crazy to do a party in the summer,” Rice says, noting the New York heat. “But the turnout was outstanding.”

If you want a ballroom, K Hotels' boutique Hotel Menage in Anaheim, Calif., has that — in fact, it has a 2,500-square-foot ballroom that can be broken in two. This versatile space with its brown and gold tones offers a sleek neutral look on its own, while flamboyant character can be found in six smaller themed rooms with built-in personalities. For example, the 700-square-foot Zen Room offers a working waterfall and bamboo floors, while the 300-square-foot Retro Room features purple shag carpet and colorful beanbag chairs. Then there's the pool deck, which can be rented for private events; the area includes different levels, 100 palm trees and almost an acre of space. While the outdoor event space is “Mother Nature-dependent,” concedes managing partner Richard Ham, that's not a big issue in mild Southern California.

The hotel's June 2007 grand opening made good use of the outdoor event space. In fact, one goal of the event was to demonstrate to the 650 guests what could be done with the pool area. “The decor was modern chic with a bohemian Bali style,” Ham notes, enhanced by “sheer white fabric throughout the pool area with color splashed via LED lighting of purple and blue.” Gobos lit the pool; a reggae band got the crowd moving; a lava lamp-lit entry provided a warm welcome; and an acrobat performing cirque-style moves in a big bubble floated on the pool.

NYLO Hotels lives up to its “Stay Unique” tag line with Rhode Island's NYLO Providence/ Warwick hotel, which opened its doors in September. It's the first hotel in Rhode Island to run on 100 percent renewable energy with solar, wind, biomass and hydroelectric power sources.

And not only does the urban hotel forgo a traditional ballroom, it forgoes a ballroom altogether. Instead, the NYLO hotel offers as event spaces a 1,500-square-foot restaurant/bar called the Loft, which opens to a 3,000-square-foot terrace, as well as a game room.

The event space decor takes cues from its New England environment. Sea-coral chandeliers, anemone-inspired wall sconces and seashells beneath Plexiglas-topped tables provide seaside touches while floor-to-ceiling windows show off the view of the Pawtuxet River. Sand and surf also inspire the color palette with blue-and-white pod chairs hanging from the ceiling and polished concrete floors stained sky blue. The result is a hip nautical ambience that general manager Christine Nevers describes as “high-end with a sense of humor.”

The September grand opening of the property, planned by Providence-based Sullivan Custom Planning, made excellent use of the eccentric event space. Fire-dancer Spogga performed on a barge on the river while music on the tented lawn fueled dancing. Inside in the Loft, guests could join in cigar-rolling and origami demonstrations. Rather than fight the space's decor, Sullivan president and owner Sharon Sullivan “reinforced the look and let the space's unique aesthetic shine,” she says. Event details that enhanced the seaside decor included invitations arriving as messages in recyclable bottles and a local menu featuring a New England raw bar.

Rancho Bernardo Inn Resort & Spa in San Diego doesn't shun ballrooms. In fact, the property offers three. But small decor touches — such as open-beam ceilings, hand-painted murals and windows positioned for optimum views of the gardens, patios and fountains — keep the space from seeming run-of-the-mill, as does a recent $25 million enhancement and expansion. The property offers 25,000 square feet of event and conference space among 15 rooms, and clients also can take the party outdoors where the patios and garden — “complete with a cascading Mediterranean fountain,” notes director of food and beverage Mark Eberwein — add 30,000 square feet of event space. Such “distinct space separates us from the big-box hotel,” Eberwein says, with “little need for enhancement.” The brand-new 10,140-square-foot Aragon Ballroom is part of the resort's new offerings and retains its California/Spanish feel. The ballroom served as the spot for “American Idol” auditions last year.

The Aragon Ballroom also served as the site for the “Cancer for College” charity hosted by actor/comedian Will Ferrell. The September fundraiser drew 500 guests to fund college scholarships for current and former cancer patients. To avoid detracting from the natural ambience of the ballroom, “decor was simple yet elegant,” Eberwein notes. Ivory over- and underlays and Alstromeria lily arrangements graced tables with sconces and chandeliers set to low. The pre-function room served as the auction display area with 8-foot tables covered in chocolate-colored linen and two lit fireplaces.

When developing a character event space, Eberwein has one key piece of advice: remember the client. “The greatest mistake would be to create a character space based only on your preferences.”