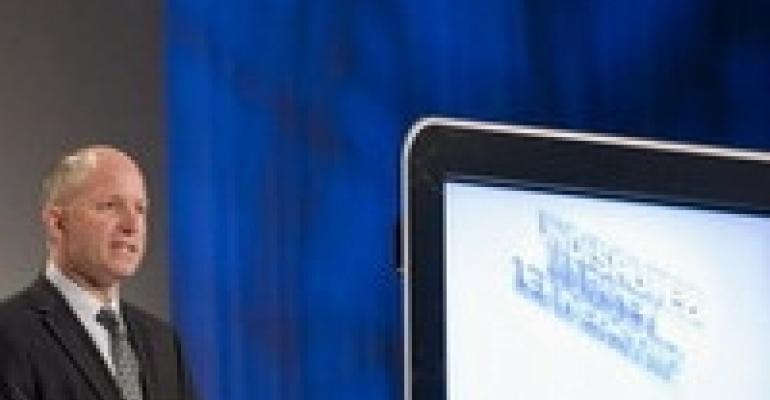 Not only are iPads changing how event professionals work, they are also changing special events themselves.

Last week, we looked at how iPads are changing the way event professionals work. Today, we review three case studies showing how the iPad—Apple's blockbuster tablet computer—is shaping events themselves.

THE IPAD IS THE EVENT

For its dealer meeting three months ago, Freightliner was looking for an innovative, memorable and cost-effective way to share product and sales information with more than 500 dealership representatives. Further, a key component of the meeting was the debut of a custom app developed to help dealers interact with potential customers. What else to turn but to iPads?

For the event, Portland, Ore.-based Henry V Events went for iPads in a big way—literally. The team devised 52-inch touch screens, designed to resemble iPads, for executives to use onstage to drive key points home. "But this wasn't just for show," notes Henry V managing director Matt Harper. "The oversized iPads were critical to reinforcing a new era of innovation and mobility for Freightliner dealership employees. Getting Freightliner's commitment and support was not a challenge; it completely supported the company's goals while also being fresh, new and cool."

Also, the dealers all got their own iPads—specially configured with the new Freightliner app--and received training in how to use them in a special Apple-sanctioned lounge. The lounge itself was no small accomplishment. "Apple is notoriously careful and protective about its brand and closely reviews new iOS apps before approving them for public distribution on the company's app store," Harper notes.

Henry V invited Apple corporate representatives to participate in the dealer meeting. A so-called "geek bar," similar to the Genius Bars in Apple retail stores nationwide, provided a stylish counter where dealers could pose questions about the app to the developers and Apple representatives. "In this way, Henry V ensured that Freightliner and its dealers got the best possible experience, and Apple learned more about how large corporate customers are using its technology in the real world," Harper adds.

In an industry that relied on paper sales forms and faxes as recently as 10 years ago, the iPad app has been a hit. Dealer salespeople can now show customers exactly what their customized truck—with, say, a chrome bumper—will look like in real time, Harper explains.

For every truck sold at the event, dealers got an extra iPad to take back to their sales force. "In many cases, larger dealerships earned dozens of iPads, which are in use every day in their dealership offices by the entire sales staff," Harper says, "making them and integral part of day-to-day business operations for the dealers."

WHAT DOESN'T AN IPAD DO?

When a growing healthcare company had to train a new field sales team a scant six months before the expected FDA approval of its drug, it had to work fast. To help, New York-based event marketing agency TBA Global turned to the heavy-duty capabilities that the lightweight iPad packs.

Because the iPad platform was fully integrated throughout the training session, company leaders could assess the sales team's grasp of information and adjust the content being presented as needed, Jenks notes. And the iPad included the all-important fun factor: "Gaming features within the branded iPad app created an engaging, enthusiastic competition as the sales team saw their scores posted in real time on a scrolling leaderboard," Jenks adds.

Note: TBA offers a white paper on the growing role of iPads at events; download it here.

Award-winning international event agency Vok Dams Group has long turned to a rich mix of tools—from high-tech to street theater to social media—to spread a client's message. And the iPad is just one more tool in the company's arsenal.

For client Nespresso, the Vok Dams team helped debut the new, 5,000-square-foot flagship store in Munich last fall by giving journalists an iPad with a custom app offering an interactive tour of the huge space. For a launch for BMW, iPads equipped with three different apps gave journalists an inside look at the cars' inner workings.

"In general, we use iPads and apps in the context of 'hybrid events,'" explains Voks Dams director Wolfgang Altenstrasser, which he defines as "the combination of social media and the event." Thanks to the iPad's ability to present information in an interactive way, "It is much easier to achieve the objectives of an event--information, activation, motivation," he adds.

And the Vok Dams team is committed to hybrid events. Says company owner Colja Dams, "We do believe that hybrid events are the future in our business."

Your Event Photos and Your iPad: Don't Leave Home Without Them

How iPads are Changing Events: A White Paper from TBA Global