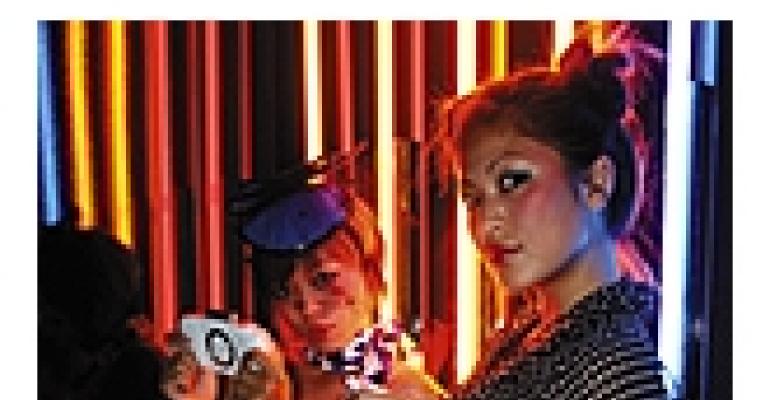 THE dazzle of high-tech? Or the warmth of high-touch? When it comes to making show spectators bond with a brand, both strategies succeed. These case studies show five intriguing approaches to exhibit interactivity.

Electronic Entertainment Expo, or E3, drew 60,000 industry professionals to Los Angeles in May for the latest in interactive entertainment. And Sony Computer Europe Entertainment wanted to make a big splash at the big show as it unveiled 27 new software titles and games for the PlayStation platform to the European trade and press.

London-based Exposure got into the game, creating a spectacular playground where guests were immersed in the gaming experience. Guests entered the room through a tunnel to find an exuberant environment with stylish lounge areas for socializing, gaming and conducting meetings. Barco's MiPix LED grids created graphic patterns that tracked around the walls, an effect amplified by mirrors. “Neon half shapes — taken from the PlayStation controller — rested against the mirror wall,” says Alison Berkani, Exposure's production director. “So the end result was a whole PlayStation shape cutting into the mirror panel.” Keeping things moving were showy “harajuku girls” demonstrating the “TalkMan” game while “Tarzan” and “Jane” explained the fine points of “Buzz Junior: Jungle Party.”

To appeal to an audience beyond the traditional teen-boy gamer, the booth featured a cheerful orange and white color scheme along with sleek white sofas, banks of N-Gage handsets and Nokia smartphones, and a DJ spinning everything from hip hop to Frank Sinatra. Making a sly statement, six silent water-mist FogScreens displayed changing projections of people playing mobile games. “So much of mobile gaming is just to pick up the handset and play, and we wanted to give that opportunity to attendees,” Walters says.

At Ford Motor Co.'s display at the North American International Auto Show, held in Detroit in January, the cars may have been standing still. But the visitors weren't.

The Imagination Group, based in London, positioned high-definition plasma “iScreens” next to each model in Ford's Mercury line. Grabbing hold of the screen, visitors rotated it 360 degrees by walking around it. “The interaction is a lot more physical than just a touch screen or mouse,” notes Imagination media group chief Damian Ferrar. The screen shared not just technical information about the cars but also lifestyle imagery.

Not all exhibits need high-tech elements to touch attendees. At the ASUG/SAPPHIRE conventions — held in Orlando, Fla., in May — discussion centered on sophisticated software solutions. But when French consulting company Capgemini wanted to draw attendees to its booth, the company said it with flowers.

Capgemini hired Ira Mitchell-Steiman, creative director with ME Productions of Pembroke Park, Fla., as the “floral artisan” for its exhibit booth. Using his floral expertise and a shamelessly fake French accent, Mitchell-Steiman kept attendees returning to the booth throughout the day to watch his progress creating a 12-foot tall “Eiffel Tower” and an 8-by-8-foot “painting” of water lilies â la Impressionist Claude Monet, both fashioned out of flower petals. Just to keep the company's brand top of mind, Mitchell-Steiman also handed out 150 nosegays, each hand-tied with a ribbon bearing the Capgemini logo.

Mitchell-Steiman built the Eiffel Tower on a polystyrene base, attaching the thousands of petals with wood picks and hot glue. The “painting” was 4-by-4-foot sections of foam board with spray-adhesive holding the blooms.

Although the original plan was to remove the Eiffel Tower after the first day to make way for another performer, it was such a hit with attendees that “We were asked to keep it in beautiful splendor for the duration,” Mitchell-Steiman says.

Although Purina's “Pro Plan” dog food is No. 1 with show-dog owners and top breeders, the brand lags in the consumer market. Purina turned to Chicago-based Live Marketing to help boost the brand at the National Dog Show, held in Philadelphia in November by keeping it real.

Keying on the brand's “real” message, the team created an activity area that gave dog owners a direct experience with the brand. In the “Real Meat” area, show-goers used a computer to find what type of Pro Plan food to feed their dog and received a sample. In the “Real Experts” area, breeders and nutritionists were on hand to answer questions. In the “Real Commitment” area, visitors learned about a Purina program that helps local pet-rescue operations.

Post-show surveys revealed that 87 percent of respondents said the activities made them more inclined to feed Pro Plan to their pets, and actual booth traffic exceeded the team's initial goal by more than 300 percent. Now, that's best in show.