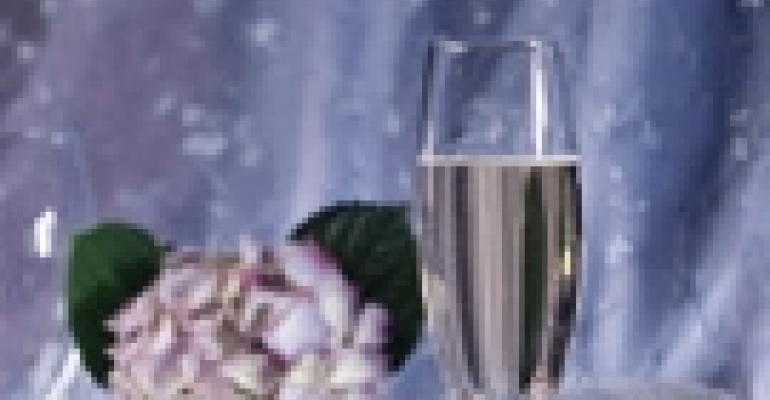 Consider the tent. It creates an event site where there was none before. It shelters guests from sudden rain, but just as readily shows off the stars. It's here one day and gone the next. In our annual feature, we look at the endlessly adaptable tent.

Indicative of the venue possibilities that tents create is a project by Phoenix-based Prime Structures. When an event hotel's ballrooms were filled to capacity with the client company's product displays, Prime Structures set up a tent structure on a concrete parking deck in front of the hotel to feed and entertain 500 guests. The project, staged in February, is a 2001 Gala Award nominee.

A structure of this size had never been installed in the parking area. The tent had to be carefully bolted to the deck so as not to damage the cables within the concrete.

In order the maximize the dramatic views of the Tucson, Ariz., skyline and surrounding mountains, Prime Structures selected solid glass walls rather than clear vinyl. However, the structure's original European glass panels did not meet local codes, nor would they protect against the harsh Arizona sun. To solve the problem, Prime Structures worked with a local glass manufacturer to custom-build tinted glass wall panels made from tempered safety glass.

Originally the client requested only carpeting, but Prime Structures argued that rain could easily flow into the tent and flood the carpet. At the last minute, an ominous weather forecast prompted the installation of a raised interlocking floor system. Although the initial plan was to carpet the flooring, “the client was so happy with the look of the bare flooring system, it was decided no carpet was required,” Prime Structures sales manager Murray Hamilton says.

Carrollton, Texas-based Ducky-Bob's Party & Tent Rentals also turned a parking lot into an event venue. But this site had an extra twist: it was 500 feet away from the main event site.

For the gala opening celebration of the Women's Museum in Dallas last September, event organizers quickly realized that the museum itself could not accommodate the 1,700 expected guests. Instead, the event team found a vacant lot that could work. The lot was resurfaced and equipped with water and electricity. To create a link between the lot and the museum, 500 feet of illuminated marquee tenting led from the rear entrance of the museum to the main event tent and into a grand entryway at the museum.

The 40,000-square-foot main tent, flanked by four tented comfort stations, was filled with swags of pastel fabrics woven from pole to pole. Tinted adjustable lighting illuminated the fabric at junctures where faux limestone carvings in Art Deco style topped each pole, imitating other structures on the museum campus.

TWO'S BETTER THAN ONE

The Stuart Rental Co., based in Milpitas, Calif., proved that by working together, two events are better than one. In a project that just earned a 2001 Gala Award nomination, Stuart helped two clients share tenting resources on back-to-back events, yielding a superior site that both groups could use.

The first client wanted to stage a business reception in January for 2,000 guests following a trade show. The venue chosen was Treasure Island, a World War II military installation in San Francisco Bay that offers a panoramic view of area skyline. The initial plan involved installing an outdoor patio in front of one of the venue's airplane hangars with a large entry tent adjacent to the patio and a smaller tent connecting to the hangar.

Just a month before the first event, a second client contacted Stuart. This client had reserved the same hangar on Treasure Island for an event nine days after the first event. The second event was much larger: 5,000 guests celebrating the 20th anniversary of a local corporation. The requirements of the second event — which included installation of an additional 23,000 square feet of covered space — conflicted with move-out of the first event.

Stuart client services manager Susan Kidwell and her team worked directly with each client's designers to come up with a unified tenting solution meeting each client's budget and requirements. The result was a 100-by-200-foot tent erected alongside two airplane hangars serving as a reception area for the first event. Nine days later, the tent was reconfigured as an attractive overflow space for the second event. The first event wound up with a larger viewing patio and a larger tented venue. The second event took advantage of the viewing patio and benefited from interior covered restrooms and a separate coat area.

Although some event professionals design around the tent, trying to make it seem like a permanent structure, others capitalize on its impermanence. Event designer Yifat Oren of Encino, Calif., worked with El Segundo, Calif.-based Regal Rents to design a tented beachside wedding reception in May that “appeared as if it washed up on the shore and washed away the following day,” Oren says. The event is a 2001 Gala Award nominee.

On a bluff above the beach, the reception area consisted of three rectangular tents arranged in a U shape. The front of the tents had no walls and faced the ocean.

The tent draping — mosquito netting, monk cloth and fiber burlap — was dispersed randomly throughout the ceiling and down the walls in loose patterns. Thirty lanterns featuring tie-dye patterns in watery colors hung from the ceiling. The center of the U-shaped floor plan was the dance floor, which was open to the night sky. Guests who grew tired of dancing could lounge on the ottomans and throw-pillows lining the sidewalls.

The event “captured the essence of the beautiful California coastline,” Oren says.

Another example of an event taking advantage of the inherent romanticism of tents is a corporate incentive gala held in May at Ngala, a private game reserve in Naples, Fla.

Although the setting for the dinner was pure primitive — with tropical foliage, tribal music, torches and a wandering leopard — the experience was pure luxury.

The dinner for 300 guests was staged under three pole tents. Because of the hot weather, the Ngala staff installed a misting system that atomizes water “five times smaller than a human hair,” a Ngala spokesperson says. Massive fans mounted in the trees blew the cooled air back into the tents, lowering the temperature as much as 20 degrees Fahrenheit. As a result, the tents' sidewalls could remain open, permitting views of the lush plants.

The final touch: food stations that kept the theme going, featuring delicacies such as crocodile kabobs.