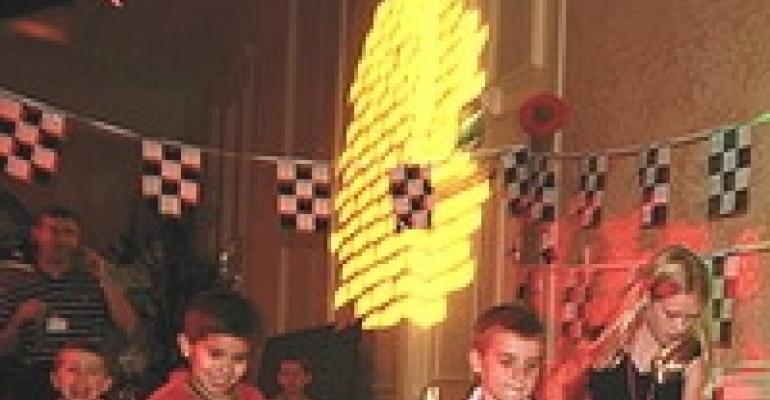 It's a Corporate Event--And Bring the Kids

It used to be that the sole family-friendly corporate event was the company picnic. But not anymore. Now, corporations host a wide range of events that free parents from the babysitter hunt and include kids in the fun.

Janine Micucci, event producer for Los Angeles-based Along Came Mary Productions, says she had three goals in mind while developing the General Motors' “Chevy Rocks the Future” event in February: Make it entertaining, make it educational and make it as “green” as possible. To tout its line of environmentally friendly cars, GM and ACM created a party/press event for 150 L.A.-area kids at Disney Studios in Burbank, Calif. Along with the fun, the future car buyers learned about the various technologies that power GM's eco-friendly vehicles, Micucci explains. Kid-friendly event elements started with the invitation itself, a branded mouse pad made entirely of recycled tires.

Micucci says that she was pleased to see that both children and parents were entertained by the event's five “biospheres,” which demonstrated eco concepts, including what the term “hybrid” means and how electric vehicles work. Kids discovered that fuel can be made from vegetables such as corn in one “biosphere,” then snacked on popcorn with a variety of toppings. The evening ended with a performance by boy-band sensation the Jonas Brothers.

The Along Came Mary team, which also handled catering for the eco-conscious event, served a low-fat, organic, locally grown menu. “Our chefs put together the healthiest ‘junk food’ menu ever, using no trans-fats, no white flour and as little sugar as possible,” Micucci says. Partygoers feasted on organic sirloin burgers, veggie burgers and wild-caught fish, ending their meal at a yogurt sundae bar with a variety of fresh “super-food” toppings, such as acai berry compote, berry pomegranate sauce and dried cherries.

Kids dug for buried treasures in sand-filled chests, “pirates” performed swashbuckling antics aboard a stage shaped like a ship, and a mysterious fog rolled right into the room. This wasn't the set of an adventure film — it was the scene at the annual family event from a financial services company.

San Diego-based Destination Concepts staged the event twice for its client, at a Hershey, Pa., resort on Oct. 6 and again in San Diego on Oct. 20.

The team planned 20-minute entertainment vignettes — as opposed to one long performance — to hold the kids' attention. The entertainment included pirate acrobats, a pirate magician, carnival-style games, a plank walk and an interactive DJ. A giant treasure chest — big enough for both kids and parents to enter — tempted event guests to search for treasures such as beads, candy coins and small toys.

Mike Spangler, Destination Concepts' director of production and account management, notes that the “pirate” theme just made sense. “All things ‘pirate’ were really hot in pop culture at the time, and the concept of a pirate-themed event really appealed to our staff,” he says. “From the decor to the food and entertainment, we could create a complete experience that would not only thrill the kids but bring out the ‘kid’ in the adults as well. Plus, everyone loves pirates!”

If there is one film beloved by all age groups, it has to be “The Wizard of Oz.” Noting its timeless appeal, Los Angeles-based Los Angeles Party Designs developed an “Oz”- themed final-night party for the senior partners of its client, a prominent accounting firm, during a three-day family-friendly incentive event in October.

At the party, performers decked out in sparkling cummerbunds brought the music of 1939 — the year of the film's release — to life in old Hollywood style. The movie itself had a starring role: It played throughout the evening on a large screen next to the stage where a live band performed. A haunted forest-themed game room decorated with barren trees, faux owls and vultures “beckoned for kids to play contemporary arcade and virtual reality games,” LAPD event producer Jeanna Stolle-Young says. Games included “Ruby Slipper Races” and “High Score Yellow Brick Road,” which Stolle-Young says was “perfect for children of accountants.”

Being a parent herself, Stolle-Young says that she enjoyed creating the family event “because there is no greater reward than sharing a once-in-a-lifetime experience with your children.”